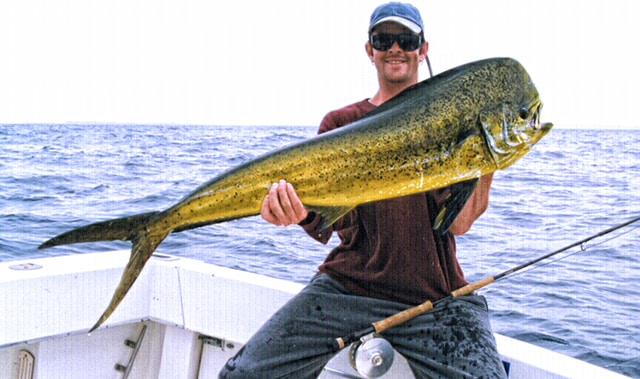 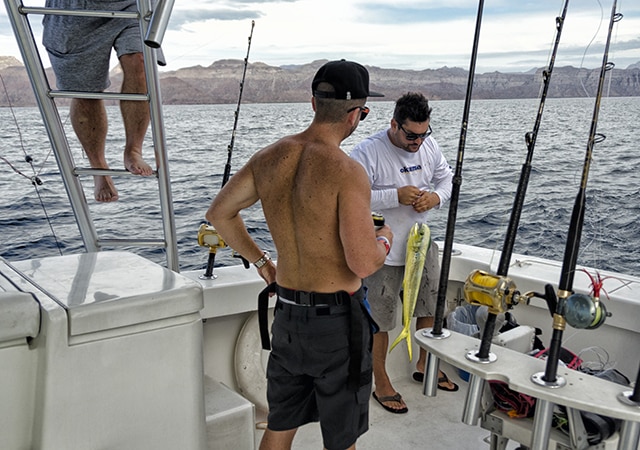 That was then. Now, dorado have gone from being the poster child of Baja anglers to becoming a shining example of the results of unrestrained commercial overfishing in the Sea of Cortez.

In 2015, a notice from Tracy Ehrenberg of Pisces Sportfishing gleefully announced the following, in part:

“WASHINGTON – The Presidential task force on IUU announced on August 3, that dorado from Mexico is now officially an IUU ‘at risk’ species. As a result, illegal fishing operations in Mexico should no longer be allowed to export dorado into the United States of America even though it is an extremely lucrative seafood market.”
https://www.bdoutdoors.com/forums/threads/dorado-catch-a-break.599204/

Sure enough, production figures reflected the reduction in the amount of dorado being shipped out of the country as the chart below indicates: 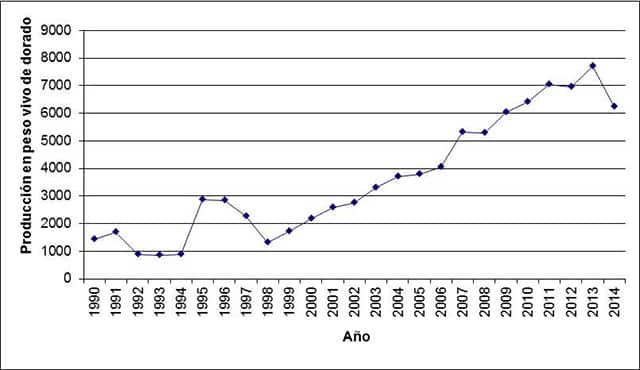 In 2016, most of the tournaments featuring dorado – or tournaments that had categories including them – were won with “dinks” by most standards, seemingly indicating that the dorado population has not recovered from the on-going commercial assault.

The popular Van Wormer Dorado Shootout, as an example, was won with a 12.6-pound, a 7.1-pound and a 6.7-pound dorado in the first three places, respectively.

This year was far better, according to Eddie Dalmau of Baja’s Van Wormer Resorts. “When the first dorado I weighed at 1 o’clock this year was over 30 pounds, I thought it would be the winner.”
“However,” he added, “by the end of the day, the top three finishers were: Joe Feeney, with a 61.4-pounder aboard Don Julio; John Churchill, with a 57.3-pound fish on the El Regalo; and Joel Mendoza, with a 52.5-pounder on Amante.”

During late July at the second annual Sport Fishing and Golf Tournament 2017 hosted by Villa del Palmar at the Islands of Loreto, many small dorado also dominated the event with the three winners weighing only 25.3 pounds, 14.3 pounds and 13 pounds.

Then, at the Serial Dos Mares Gran Finale held in early August, the dorado were even smaller, with the top three not exceeding 16.1 pounds, and with many much smaller ones brought to the scale.

According to the reports, from Bahia de Los Angeles to the tip of the Baja Peninsula, anglers reported seeing and catching many small dorado which seemed to infest the entire Sea of Cortez.

The odd thing is that the number of small dorado that we have observed at tournaments and in general from the tip to Loreto during the past several years don’t seem to be growing very fast.

Supposedly known for their astonishing growth rate when given plenty of food and warm water in which to thrive, it only takes 40 hours for a fertilized dorado egg to become a free-swimming larva, after which the fry begins to feed and grow in earnest.
By the thirtieth day, the fry has doubled in size and features dark, vertical bands along its body which makes the one-inch dorado look very much like a tiny feather.
A 22-inch fish is only 60- to 90-days old.

And it was reported that two dorado held in captivity at Sea World grew from about one pound to over 30 pounds in less than eight months.

I remember a story that my friend Doug Olander, editor of Sport Fishing magazine, wrote about another friend:
“Captain Ray Rosher of Miami caught a young male dorado weighing approximately 6 pounds and placed it in captivity in December, 2014. Nine months later the fish weighed in at 56.4 pounds … a remarkable example of their extraordinary growth rate under ideal conditions!”

These are just a couple of the many stories I had both read and written of the rapid growth rate of the dorado.

I explained the many observations reported regarding the lack of growth of the dorado. Crooke questioned the size, quantity and type of bait available before he answered my question with yet another question.

“You’re aware there is a sub-species of dorado common in the Sea of Cortez?”

Surprised, I shook my head no. “Sounds like the dorado you describe may be ‘Pompano dolphinfish.’ Send me a couple of photos,” he suggested.” 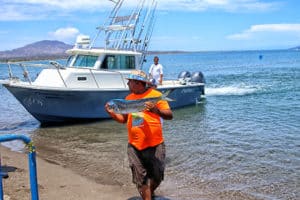 After sending him the photos, Crooke replied, “The fish in the first photo definitely appears to be a Pompano dolphinfish … They seldom are larger than 5-pounds, so they are not commercially worthwhile.”

Pompano Dolphin Identification
Dolphin are some of the most colorful, most widely distributed, and most widely recognized fish in the world.
There really are no other fish in the ocean that can be confused with a dolphin; they are unique… the common dolphin and pompano dolphin respectively. The two dolphin are difficult to differentiate and many anglers are surprised to discover there is more than one dolphin species. 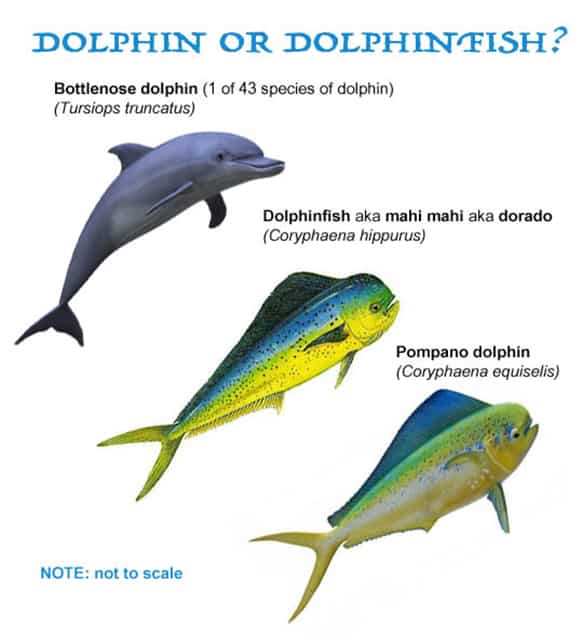 Crooke’s confirmation of the existence of this sub-species only underscores the damage that has been caused by rampant commercial overfishing of mahi-mahi/dorado for decades, which may have allowed pompano dorado (much smaller in size) to become the dominate dorado in the Sea of Cortez. 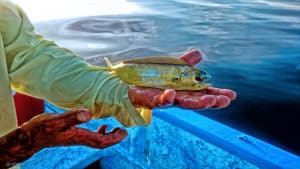 He also added, “I know of no truly marine species of fish that has gone extinct because of over fishing. The only fish I know of that have gone extinct are those where their habitat was modified by oceanic conditions (El Ninos, lack of nutrients, etc.). “ What we constantly hear about is commercial extinction, the population level at which the return on investment is so low it makes no sense to fish,” he concluded.

Why there are almost no dorado left in the Sea of Cortez?

SeaWatch Founder Mike McGettigan describes the carnage, “During the height of the Guaymas-based fishery, the approximately 70 pangas in the Calderón Brothers Cooperativa were bringing more than 80-tons of dorado per day to the beaches located near the Navy base in Guaymas.” McGettigan continued, “There were 10 times that many boats (700) working dorado just from the Kino to the Guaymas area.

Seven years of illegal fishing by over 1,000 pangas had decimated the dorado fishery in the Sea of Cortez resulting in the dorado population’s decline there.” 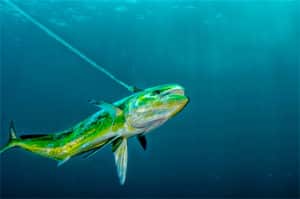 “Dorado are still being overfished commercially and the authorities continue to turn a blind eye to the problem,” Ehrenberg confided recently.

Regardless of overfishing, seldom is a species fished to extinction. Remember how experts declared that the sardine replaced by the anchovy would never recover after the overfishing in the 1940s? Or the white seabass and barracuda that are also examples of recovery?

Hopefully, over time commercial pressure will evaporate as they become less and less profitable to harvest commercially, allowing them to recover. While it seems the pompano dorado may be more prevalent in the schools being seen. There are still some decent-sized dorado around, an encouraging sign of improvement over the past few years.

Now, an angler’s best strategy is not to keep the small ones so when that “fatty” shows up they aren’t limited out.