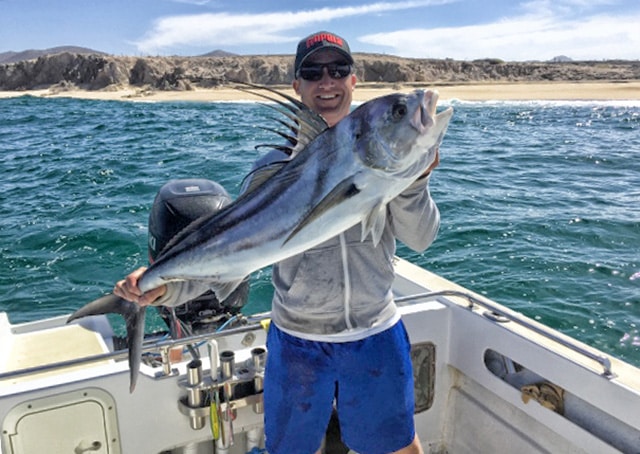 It’s intended to complement the existing services offered in San Jose del Cabo Airport. The new terminal will increase Cabo’s air capacity by up to a million passengers in the short term.

The timing and location of the new airport goes hand in hand with the construction, already underway, of 12,000 new rooms on the Pacific side of Cabo. Clearly an airport is part of the necessary infrastructure required to support this development.

Director of Los Cabos Tourism Board, (FITURCA), Rodrigo Esponda, confirms one of the key target markets is New York – “We are working hard with our partners in New York to attract more visitors. Right now, we are focusing on two main demographics. The first is 30- to 40-year old professionals, who have the means to come and enjoy the whole luxury experience offered by high-end resorts in Cabo. The second group are families who can come and enjoy the wide range of fun activities, nature and water sports.”

This place hasn’t seen much attention for awhile but that might change now as there are some nicer-sized, 12- to 15-pound yellowtail along the weather side of North Island, out on the Middle Grounds and down at South Kelp Ridge. The yellowtail at all three areas bit on slow-trolled sardines and mackerel.

Be sure and stay away from all the tuna pens anchored up in the lee of South Island. They have very long anchor lines on them. Best bet is to give them a very wide berth when traveling near them…fishdope.com

Nothing to get very excited about … just some mixed sculpin, sand bass and chocolate rockfish showing on the pipe. The plastics, tipped with squid, is a good choice for a bait to use.

Be watching for bird schools. Yellowtail have been seen in the area under birds in the afternoon a few times over the past two weeks. With the better weather you might get lucky and find them…fishdope.com

371/425 banks
Lots of little yellowtail plus the guys are starting to see bluefin again.

Tuna are still hard to come by though. Some of the big boats reported seeing a number of spots up breezing in the early morning hours but they all refused to bite. One angler scored a single 30-pound class bluefin on a trolled purple X-Rap 30 right between the banks. He was looking at a number of spots of bluefin and big bonito but was having trouble getting them to bite. 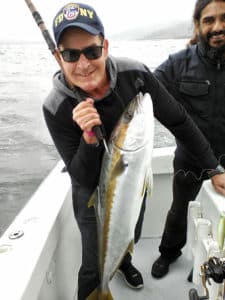 Reports also indicate that kelp in the area are holding small yellowtail. These yellowtail are mostly in the 2- to 4-pound class. Some of the kelp are holding more than others and he said most of the kelp he and his friend found were holding at least a few fish. They caught all they wanted on Colt Snipers, saving the sardine for tuna…fishdope.com 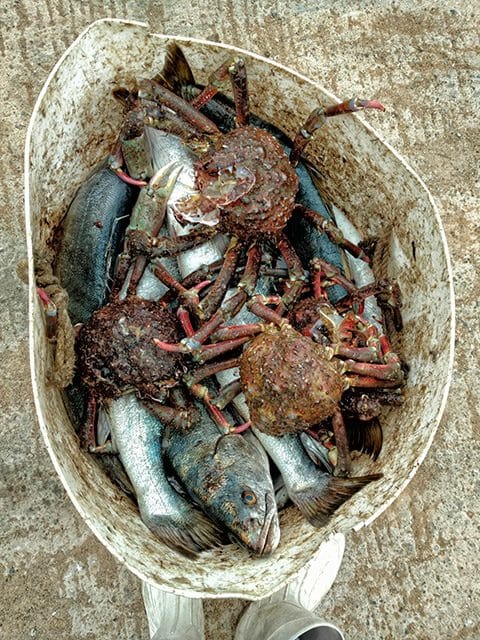 Weather was cold and water looked a little dirty but the white seabass didn’t seem to mind. …Russell

offshore. May and June are normally the beginning of the big California halibut bite. A good place to look is along the kelp in the sand beds between the reefs at the point, the lee side of the island, and the roils in the Boca, where this early June 44-pound kayaked slug came from.
This weekend looks real good for those who want a shot at some; contact the local San Quintin Sportfishing Crews…Daniel Powell 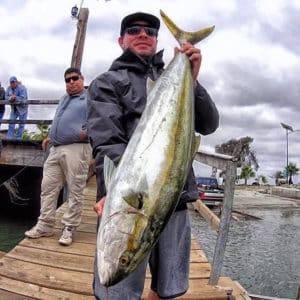 We had sporty weather on Day One with some 15-knot chunk and cold water all day. Day Two was a little better with winds laying down enough for the boys to get out to San Martin for a crack at some surface action — they had a steady pick on the ‘cuda with one nice yellow Thanks, Anton & Quinn…Kelly Catian

We headed down to Bahia Tuesday with no issues … road conditions south of El Rosario fair-to-poor but especially BAD between Catavina and the LA Bay turn-off. We encountered some of the biggest pot holes seen in years with no crews filling them, and they were there even on our return. If towing, I would be sure the trailer and tires are in top condition and seriously consider having an extra leaf spring, hub assembly and necessary hardware, etc. for field repairs.

Fishing was fair at best under full moon conditions all four days; weather nice until Saturday when westerly hit mid-morning blowing at 20+…Rob

Completely wide open yellowtail action along the front side of the island. There were several caught from shore on Wednesday.

Wind was blowing at the beginning of the week but has calmed down now;
calico bass fishing is also improving. Halibut fishing finally started to slow down after a full winter of available biters along the lee right outside of town. Tons and tons of bait around, mostly anchovy and mackerel…Jeff Mariani 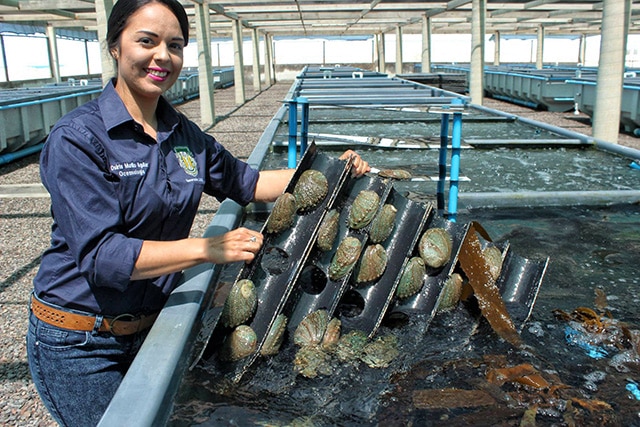 This is a sample of what can be accomplished with technology at a very low cost; it only requires a willingness to do things … lab of the cooperative progress in La Bocana…Juanchy’s Aguilar 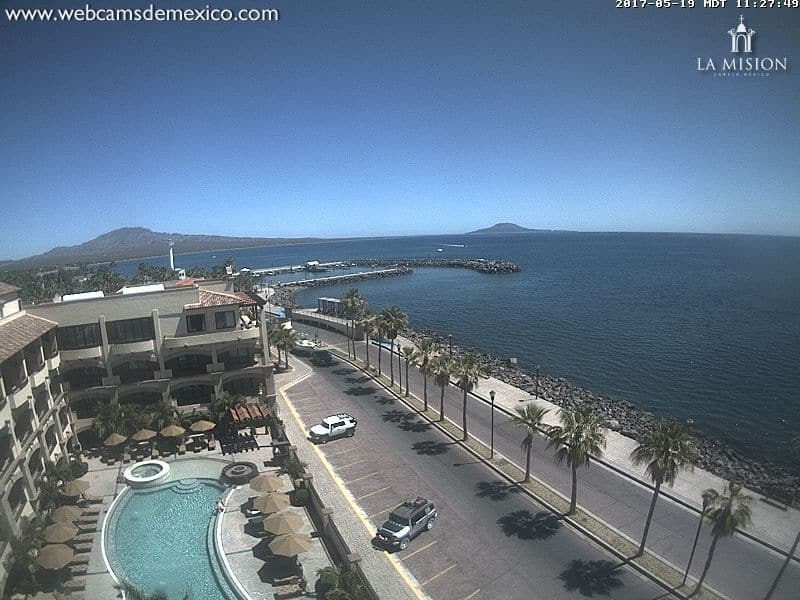 Only a couple of ‘hot spots’ opened up this week after the North Winds blew through. The reef outside of Pulpito was cranking out some good yellowtail action for the boats taking the long ride north. A good mix of medium and large yellowtail hit the fish box with many fishermen getting their five fish limit.

Live and recently live mackerel did the trick for most of those fish.
Candeleros and San Bruno Reef burped out mostly pinto bass. most of which were on the small size. Down at our southern end between Carmen Island and Monserrat there were two different flurries of action. One on iron for some medium yellowtail and a second event with big cabrilla. 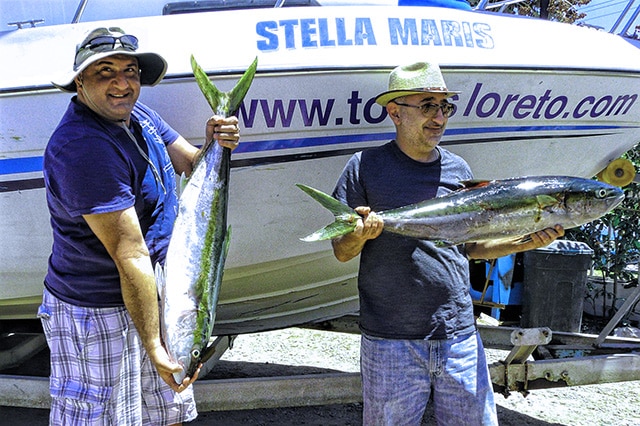 Some LA tire guys, Tony and Gorge, with a few of the yellows caught up near Pulpito. Five fish for two guys is a good day’s work. A bait tank malfunction turned half the mackerel to “recently” live bait but a little local magic with the fillet knife made them almost as productive as the wigglers.
The cabrilla haul for two boats was seven nice-sized cabrilla … one pushing 22 pounds and the smallest 14 pounds. Water temps and color are all ahead of schedule with a good showing of sargasso still in the current lines…Rick Hill, Pinchy Sportfishing 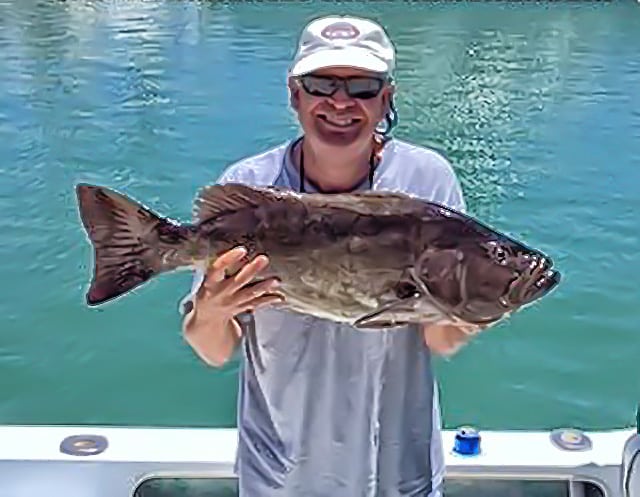 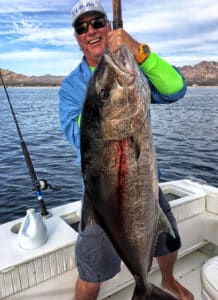 The Mahi Mahi limits out on football yellowfin and the Rude Boy with anglers Chris Rager and Dean Lawver land a nice amberjack and a tuna! Time to come fishing…Van Wormer Resorts

Van Wormer Dorado Shoot Out Save The Date 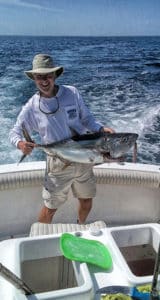 It was something of an “odd” week with unnecessary wind ranging from 6- to 16-mph that lasted through last weekend.

Fishing was nevertheless pretty darn good … and in some cases, perfect. Hard to figure! 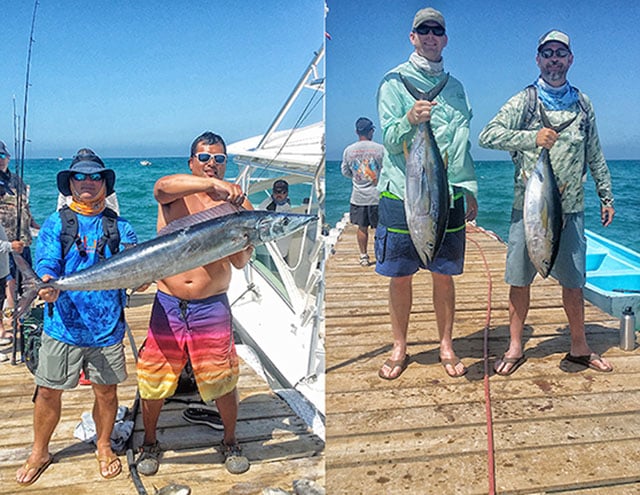 In the “hard to figure” category was a very consistent wahoo bite. No giants, but plenty of tugs from good-size ’hoo throughout the area. They definitely added to a winning week for our skippers…Felipe Valdez
https://www.bdoutdoors.com/forums/threads/east-cape-hotel-buenavista-fish-report.656424/

Late spring now, this past week was fairly quiet for the amount of visiting anglers we would expect to normally see, who knows what is creating the slack in tourism, we should see more activity the end of this month. Winds were finally weakening, after a couple of weeks of persistent south winds, as well as northerly’s at the same time, definitely still in the midst of crazy transition period. We need a couple weeks of hot and calm weather to get the fishing back on track. Recently the climate has been on the cool side,  with highs of 95 degrees, lows about 65 degrees, very ideal, comfortable climate for this time of year, surely it will become much warmer soon enough.
Ocean water temperatures have ranged from 70 degrees on the Pacific side of Cabo San Lucas, to 76 degrees off of San Jose del Cabo and to the north, actually a couple of degrees warmer closer to shore than it is further offshore. Sardinas supplies are becoming more limited, even surf conditions have been light, this is normal for this time of so far. Sometimes patterns can be later than normal, this appears to be what is happening this season.
The striped marlin bite has never really become red hot this year, normally the month of May is the peak season for stripers off of San Jose del Cabo. At this time they are finding limited numbers of marlin scattered anywhere from four or five, to fifteen or more miles offshore. Anglers are finding occasional tailing fish that will readily take larger baitfish once encountered, some boats are having multiple chances per day. Only a rare report of any dorado strikes, should be soon that we start to see some nice dorado move into the area. Wahoo very and far between as well, an occasional strike reported, most of them incidental and not being successful for actually landing the fish.
Highlight this past week out of San Jose del Cabo was looking for the regenerated yellowfin tuna action between Iman Bank and Vinorama. Anglers were using what available sardinas they could obtain and some people were using chuck bait from skipjack with success as well. The bite was sporadic, most days the best chances were found early in the day, daily totals ranged from one or two fish per charter, up to a half of dozen, sizes were ranging from 15 lb. to 45 lb.., average size fish in the 30 to 40 lb. class, nice grade fish for this early in the season. Lots of yellowfin tuna are now on these grounds, but are finicky as they often can be, gorging on the available natural food source, also a problem with too many aggressive black skipjack and of course the ever present sea lions can be a factor as well.
Not all that much action reported off the bottom structure, a few leopard grouper, amberjack, yellow snapper and barred pargo, more triggerfish than anything else, a few pushing up to 8 lb. Inshore the hot roosterfish action tapered way down, but we should see it redevelop on any given day, also sierra are still patrolling the shore, now in the later part of their preferred winter colder water season…Eric Brictson, Gordo Banks Pangas,

Fished Saturday night with Jaime; my buddy caught a sierra and about a 10-pound cubera. Talked to a random coyote and went on a cruiser yesterday, trolled up one small marlin. My friend didn’t make it today and he missed out, hammered the roosters with Jaime and Jorge. Jorge said we caught 11, lost a few, too, plus four toros. …Richard 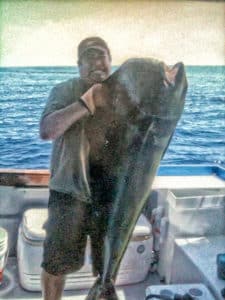 Angler Mike Cantor on Eat Me Lure caught this huge 82.0 lb dorado of a lifetime one mile south of Cabo Arch on a 9″ EM-25C Mean Joe Green. Al Obrien was Captain of the 35′ Cabo.

In spite of HOT weather, wind closes port for 3 Days. While billfish action improves slightly. Tuna remain missing while the missing dorado for most of spring are beginning to show a bit. Add to that the continued wahoo bite along with a decent inshore bite tempered the earlier in the week wind…Larry Edwards, Cortez Charters.