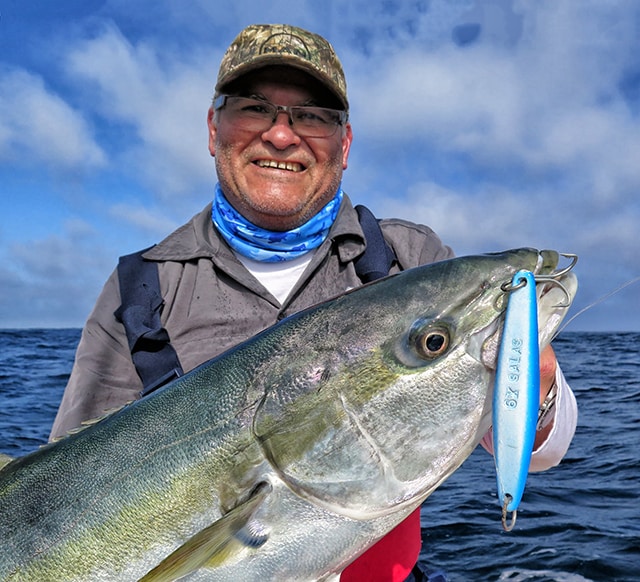 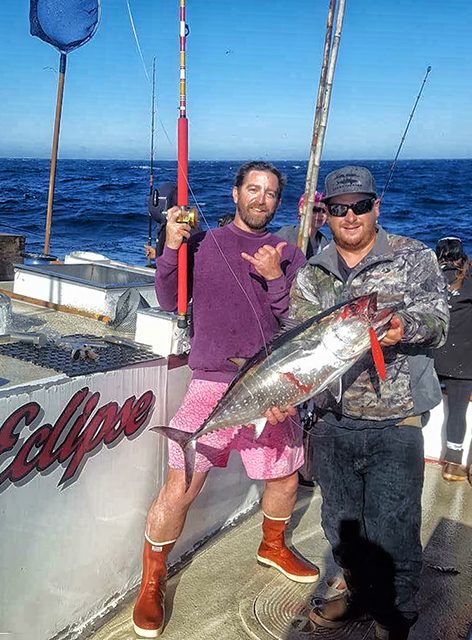 First bluefin ABOARD Eclipse outside of Colonet.

CHANGES TO THE INTERNATIONAL ANGLING RULES
Assisting the Angler

Current IGFA International Angling Rules state: “The act of a person other than the angler touching the rod, reel, or line either bodily or with a device once the fish strikes or takes the bait” constitutes a disqualification.

However, nowhere in the IGFA’s rules do we discuss the legality of another person touching or making contact with the angler. The IGFA is frequently questioned on the legality of touching the angler while they are fighting a fish.

In order to clarify this important subject, the IGFA will be adding the following language to the Section 3 of Disqualifying Acts: “Holding or touching an angler in a manner that assists them in fighting the fish or takes pressure off the angler.”

“Touching or briefly holding the angler to prevent them from falling does not constitute a disqualification.”

Current IGFA International Angling Rules state: “If the fishing line is attached to backing, the catch shall be classified under the heavier of the lines.”

This rule has long been contested in cases where the main line or top shot is lighter than the underlying backing, as logic dictates that the lighter line will break before the heavier backing. This is also contrary to IGFA angling rules for fly fishing where the catch is categorized based on the breaking strength of the class tippet, which must be a minimum of 15 inches.
To address this issue, IGFA will be making the following alterations to Equipment Regulation A:

This change is effective April 1, 2017.
https://www.bdoutdoors.com/igfa-rule-changes-for-world-records/

No report from the Coronado Islands proper, but guys fishing rockfish to the north of North Island and up close to the border are catching some nice mixed red rockfish and whitefish. The depth is anywhere from about 200 down to around 400 to 450 feet. In general, the best quality is coming from the deeper water. Fresh dead squid is the bait of choice, by far…fishdope.com

From Tijuana Bull Ring, south, the sand bass bite is fair. Some sculpin are also showing. Just like in the Point Loma area, the guys doing best are tandem-rigging a couple of plastics about 1- to 2-feet apart from each other and bouncing these across the bottom. WATCH FOR STRIKES ON THE SINK!!
Nearly 100% of the bites happen while the lure is sinking. Set the hook hard any time you see even the slightest twitch in the line…fishdope.com

The local fleet in Ensenada reported good yellowtail counts along with rockfish. 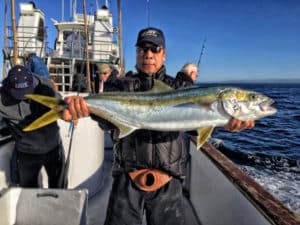 Plenty of boats are online to run down to the yellowtail area which at last word was roughly 15 miles south of the Colonet High Spot.
Good chance the fish have wandered a bit from this number but it is likely they are still somewhere in the same general area.
The depth is deep from 240 feet to over 300 feet of water. You are advised to bring plenty of the larger yoyo irons like the Salas 6X and 7X, The Tady 4/0 and 45 Heavy and the JRI Stinger red and scrambled egg have been the best colors.

For the Pacific Lures (formally Bait Wraps) try the Kragen SR, XX and XL size jigs in red squid, red crab, deviled egg and senorita colors. Weather could very well be an issue this weekend. The forecast is calling for 10- to 25-knots of wind with gust up to 35 knots.

Most all of the boats are planning to wait until Friday afternoon before making the final call on whether or not they are running. Right now all are online to run.
You can find trips set to run 1.5 day yellowtail/lingcod/rockfish trips departing Friday evening from: Fisherman’s Landing…fishdope.com 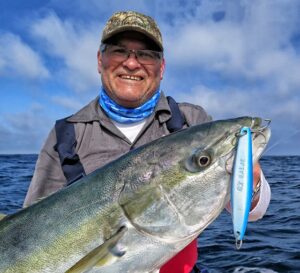 y friends Pepe, Gary, Vick and Tony Black. Saturday was breezy and cool, 8-foot swell at 14 seconds with a little wind on it; the fish bit early and then shut down. We went 3-for-3. On Sunday it was much better and the fish were there BUT so were the sea lions; we landed 6-for-11. The lions snacked on 5 of them. We fished our elbows off and had a fun time — lots of fish there feeding on crabs at San Quintin…Captain Juan 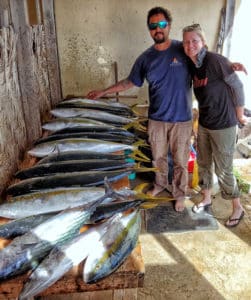 Down Vizcaino way, at Ascension. Yellows back as Shari begins her Scammon’s whale thing for a few weeks. 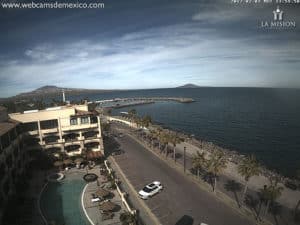 The season is progressing normally for both fishing and tourism here in Loreto.

The beaches at Conception Bay are full for the first time in years and the yellowtail are crashing on bait at Pulpito!
It’s good to see the normal cycle returning after the past two years of El Niño.

The first part of the week provided fishermen with weather perfect mornings allowing a few scouting parties to hit the farther destinations. The long ride (35 miles) north to Almejas Bay and Pulpito resulted in 25-pound yellowtail snapping every bait that hit the water. The Tuesday boats all caught limits with a few fish pushing 30 pounds and bigger fish bending hooks and breaking line.

Coronado and San Bruno have been good for the earlier boats for smaller yellows and pinto bass.

Out at Lobo they are still catching a small number of yellows but the bite on big huachinango continues. This is the best year for the big red fish I have seen with most boats nailing at least one fish over 12 pounds.

The second half of the week got a bit windy which is also part of our normal winter weather cycle. Still got pangas and kayakers working the mouth of the arroyo south of town catching sierra and triggers…Rick Hill, Pinchy Sportfishing 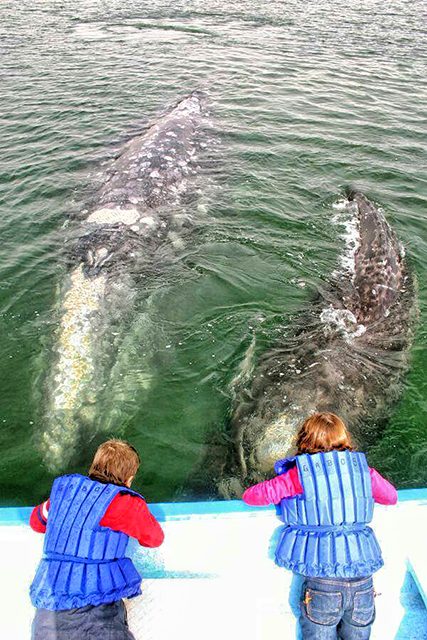 Not just a pretty 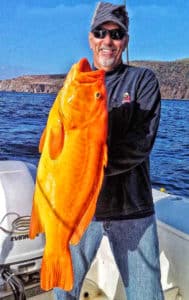 fish, but a pretty photo! I hope our amigo and ace fisherman, Roger
Thompson, frames this photo of his golden grouper. He’s caught a ton of great fish over the years, but this one is especially cool. He was fishing with his favorite Captain Hugo and took this on . . . (wait for it) . . . a trolled Rapala. …Jonathan Roldan, Tailhunter International. 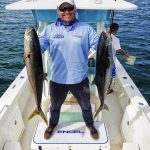 At East Cape, Felipe Valdez just can’t seem to get enough of the local yellowtail action. 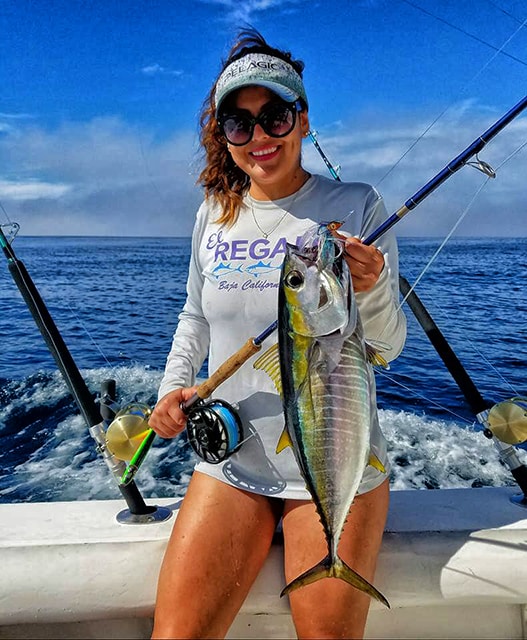 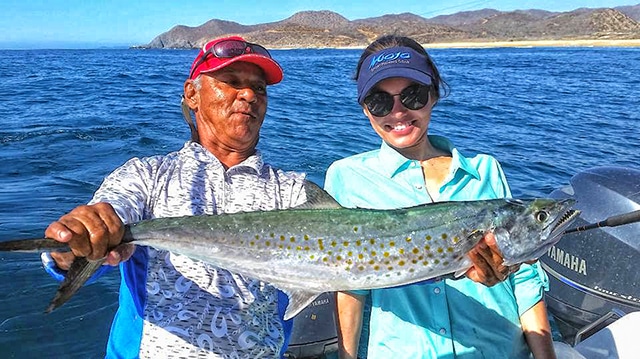 Well…you all asked. We caught seven nice, yummy sierra and the live sardina were THE CALL. Great seeing packs of these speedy mackerel boiling on our chum and then hooking up on the live ones. Sammie Solomon caught the jackpot fish. All will be diced and sliced into ceviche and sashimi after a day on the ice. …Bill Boyce, Destination Baja

We always talk about the high billfish boat for the week and this past week we found it necessary to make a change and include the boat with the only billfish for the week.

While it was another difficult fishing week for the Cabo Fleets, Captain Octavio, aboard the “Gaviota IV”, reported in with a total of 3 stripers released and a day with a couple of dorado for his 4 days fished.

I talked with Captain Roberto Marquez this morning, aboard the Tuna Time, as he was passing by Cabo Falso area and he told me that his water temperature was right at 65 degrees and the water was chocolate brown; no sea life in the area that just a couple weeks ago was one of the entire area’s hot spots.

Cabo Climate: Warm and sunny days with an average temperature at 87.4 degrees and cooler nights at 60.8 degrees average. Humidity ratio was at 57% average for the week.

Sea Conditions: Varying water temps on both sides of the tip of Land’s End. Pacific side reflected 65 to 71 degrees from the Finger Bank to Cabo Falso, then increased from Cabo Falso to the 1150 Fathom Spot, moving up to 73 degrees and then tapering back down to 71 degrees from the Gorda Banks to Los Frailes. No real stability at this time throughout the entire area with changes taking place from the mornings to the afternoons. Sea surface breezes mostly flowing in from the southeasterly directions at an average of 10.4 mph.

Best Fishing Area: Two of the three stripers were landed at the Jaime Bank, along with the eight yellowfin tuna which would make that the “hot spot” but there were a lot of other boats that fished the same area for little-to-nothing for their efforts.

Best Bait or Lure: There was no mention of what was working best for the crews and anglers fishing the off shore waters but I would share with you that most were trolling an assortment of artificial lures in varying colors and changing often due to a lack of bite action. A few were drifting with live bait on top of the banks and a few were even fishing deep water for a chance at a grouper bite. An enormous effort is typical for the crews when the fishing is so difficult as they want to make sure the anglers think they are trying their best to produce a bite for them.

Bait Supply: A good supply of caballito at the $3.00 per bait rate…Larry Edwards, Cortez Charters.