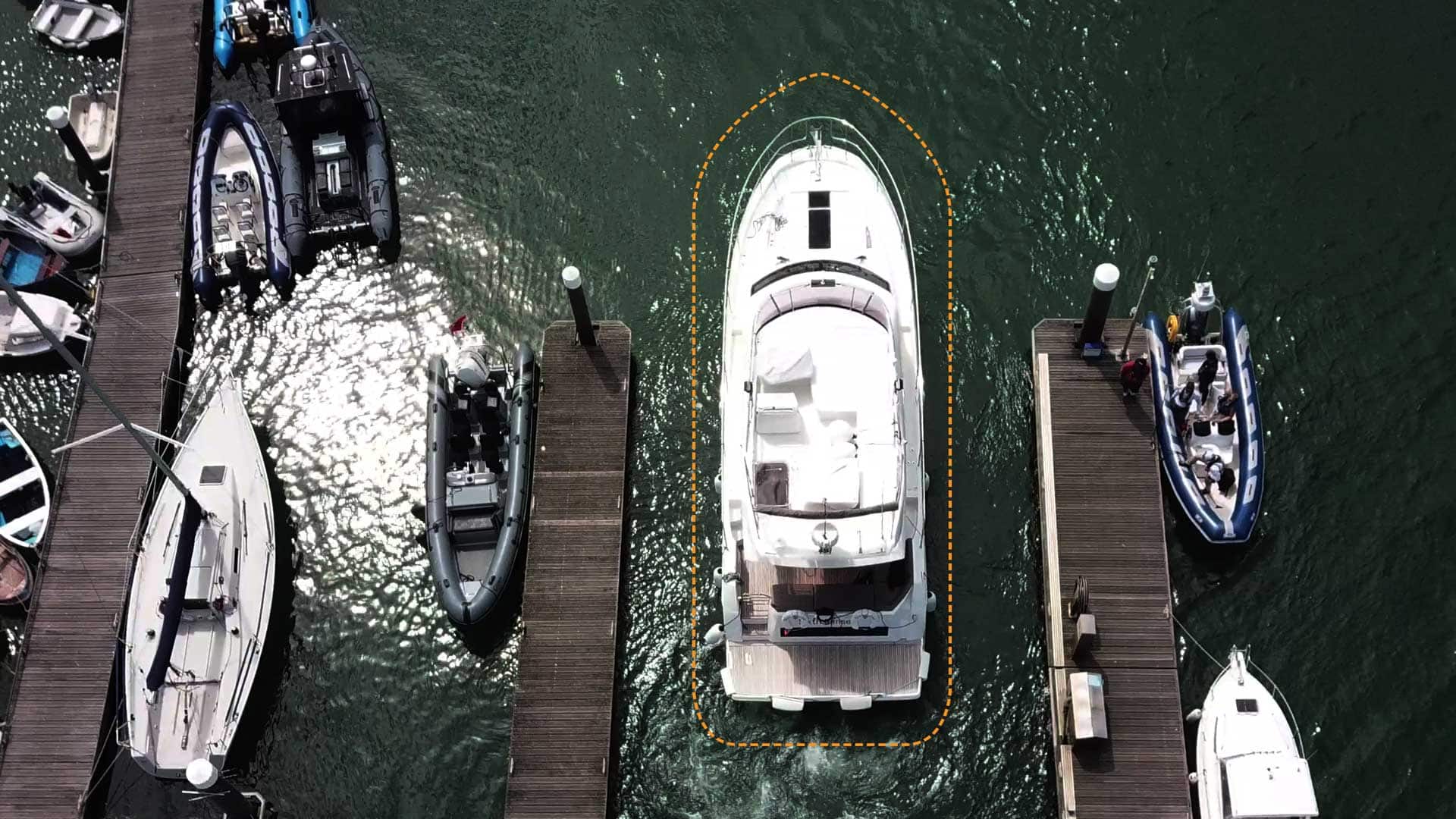 There will come a day when you merely press a button to dock your boat – and that day is a lot closer than you might think.

Whether you’re talking about the newest generation of marine radar, the latest in outboard engine two-stroke technology, modern virtual anchoring systems, or today’s options for remotely monitoring a “connected” boat, one thing is for sure: tech is having a huge impact on our boats and how we use them. And since we now have enough technology to create auto-parking cars, it shouldn’t shock anyone that some folks in the marine industry have been working on auto-docking boats. What is a bit of a shocker, however, is just how close to reality auto-docking actually is.

Just a month or so ago, we told you when FLIR Systems announced Raymarine Docksense Assisted Docking.  And less than 30 days after that announcement, we were able to actually use the system ourselves. At the Miami International Boat Show we joined up with the folks from FLIR for a hands-on demo of the system, which they had installed on a Prestige 460 and a Boston Whaler 330 Outrage. While the Whaler is much more our style of boat, we jumped on the Prestige for a test since it was a much larger boat in a much tighter slip – thus more of a challenge for the system.

After pulling out and getting askew of the slip, we began nudging the joystick to position the boat for backing in. The reps aboard assured us that no matter what we did, we’d be literally unable to smack a piling, the dock, or the boat next door. Naturally, we took that as a challenge – so once we were more or less aligned with the slip we pulled back on the joystick and held it firmly in place. The twin diesels gave a bit of a rumble, and the boat began sliding backwards. As the starboard corner of the transom started coming alongside the first piling, the boat shifted itself to port to keep a buffer zone of about two feet from the solid object, and continued backing in. And as the transom neared the dock the boat slowed itself, coming to stop once again with a crash-stopping buffer. Yeah, we tried jamming the joystick to the left and the right, and then back again. The boat stayed firmly locked in place, refusing our command to smash into the wood and the fiberglass.

Raymarine calls this function a “virtual bumper,” and standing at the helm, that’s an apt way to describe how it feels.

How does it work? Six FLIR cameras which are advanced enough to provide a form of depth perception (they were originally designed for robotics) are placed forward, amidships, and aft on either side of the boat to provide a 360-degree panoramic view. A CPU and the Raymarine Axiom Docksense App stitch the visual images together and then utilize GPS and an attitude heading reference (AHRS) system. The system crunches the data and displays a very radar-like view on the MFD, flashing an indication of the virtual bumper as it’s applied against a dock, boat, or other solid object. In fact, odd as it may sound, we found it easiest to stare at the screen while docking the boat and on our second try, put the boat into the slip without ever looking out the window. Once the boat’s in the slip, another function allows you to snug it up against the dock – without actually touching it – for tying up.

Meanwhile, a long, long time ago in a galaxy far, far away (last summer at the Volvo Ocean Race) Volvo Penta announced the existence of their self-docking technology.

While they wouldn’t let us take the helm for this one, they did demonstrate push-button docking by sliding a 68-footer between a pair of (very expensive and also high-tech) racing sailboats.

At first this system sounds much more advanced, since it’s as simple as pushing a button and remaining hands-free at the helm. However, it also requires a lot more preparation and has more limiting factors. Unlike the FLIR/Raymarine system, it operates via an integration of GPS, IPS, and dock-mounted sensors.

As a result, this system only works in slips that are specifically modified with the addition of those sensors. And while the FLIR/Raymarine system is hitting the market this year, Volvo says we’ll have to wait until 2020 for complete hands-off, push-button docking.

Yeah, we know – to some degree, all this technology and automation seems to somehow dumb-down the boating experience. There’s a part of our brain that says if you want to dock a boat, you should learn how to dock a boat. But there’s no doubt that high-tech systems like these are changing people’s attitude towards boats, are changing the way people use their boats. And there’s also no doubt that in this day and age, that technology is going to keep on evolving – at a blistering pace.