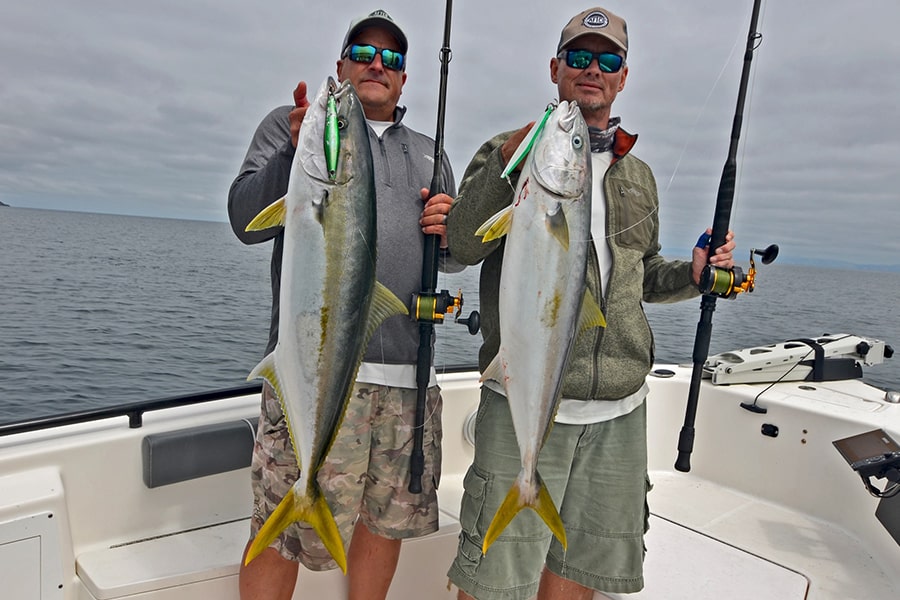 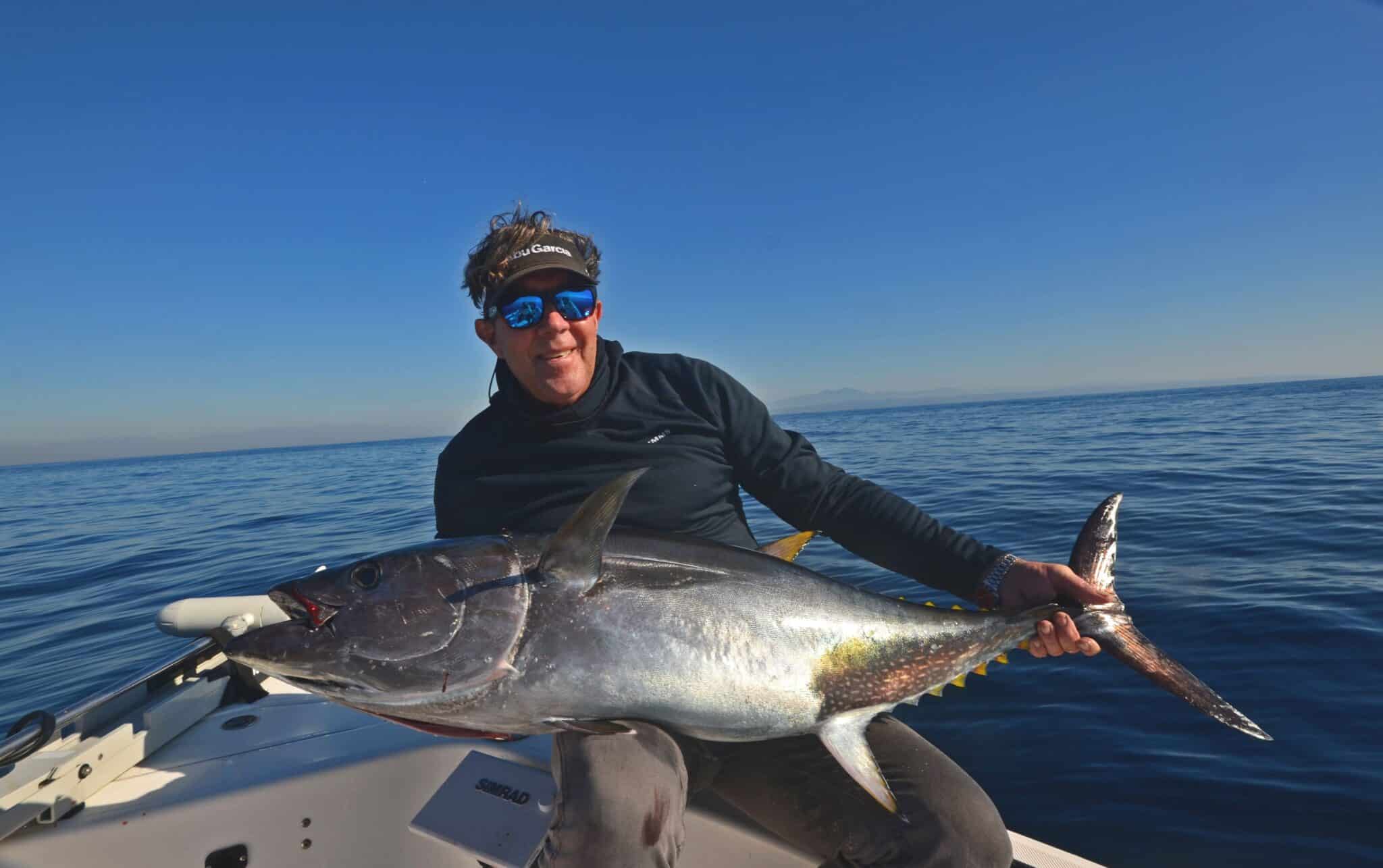 It’s hard to believe, but it’s been eight years and a few days since I wrote my first installment of the SoCal Scene. I went back and reread the article this morning and while the reds are biting on the 150 again as I write this, our overall fishing landscape has changed enough in the intervening years as to be unrecognizable to the angler I was when I wrote it. While I understand that this crazy angling ride we’ve been on the last half-decade will eventually come to an end, I’m thankful for each and every moment on it.

I’m also thankful for the experiences I’ve had, the lessons I learned and the friends who were with me to share in this amazing year.

Jimmy Decker and I started our offshore season early this year with the bluefin pictured above that we caught the morning of January 4th. The coolest part about this fish is that we’d put together a game plan based on the conditions and topography associated with where fish had been seen and caught earlier in the week and were able to drive away from the fleet and find our own fish. If you haven’t tried to find fish of your own, or have been unsuccessful when you’ve tried, I suggest checking out this article as it may get you pointed in the right direction. 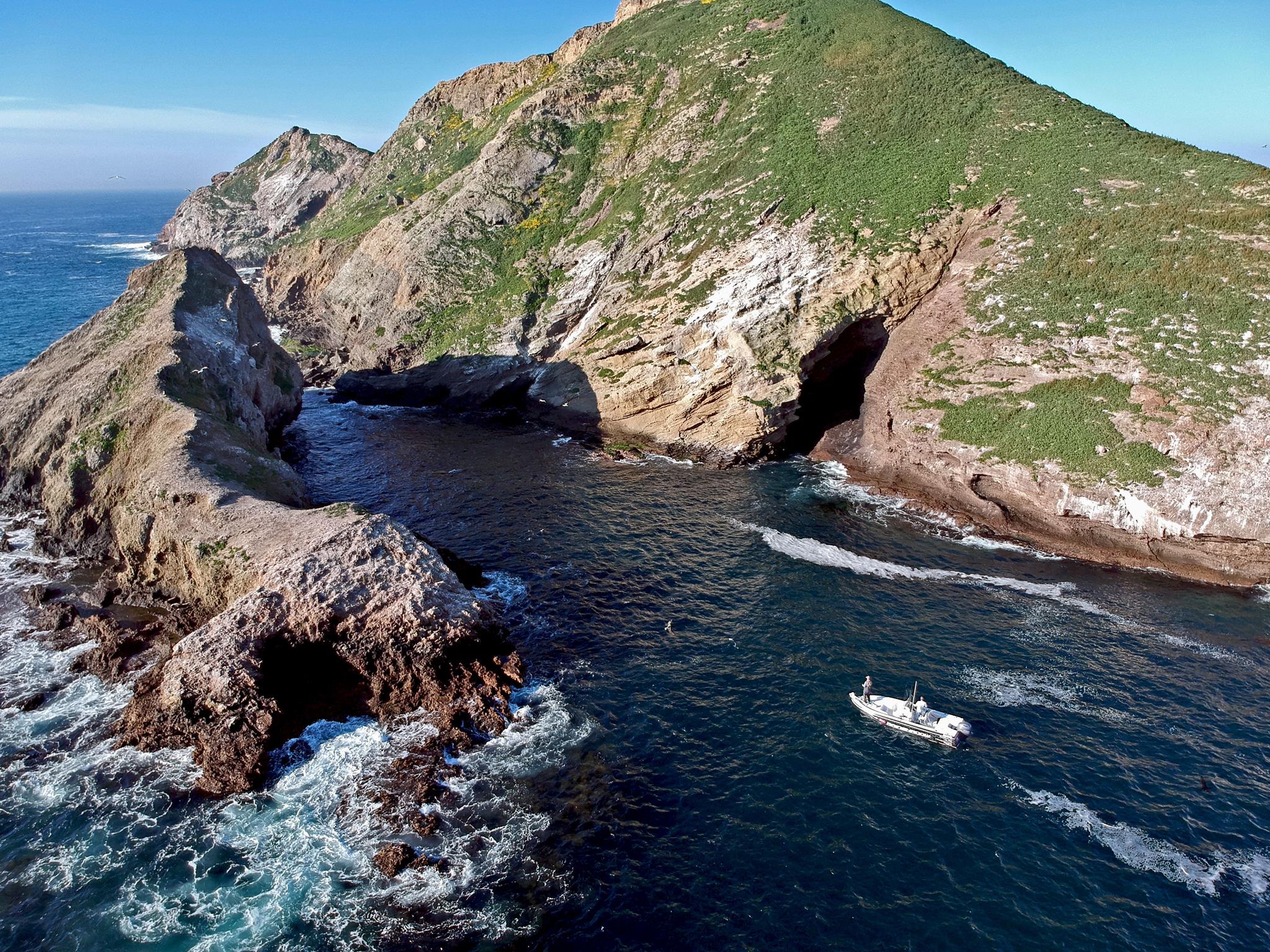 The offshore fishing tightened up a bit over the next couple months, but rather than stay home and sulk, I went fishing for fish that I knew would be biting. One of this year’s most memorable trips was a run Matt Kotch and I made to the Coronados to fish calicos. The trip, which only ended up lasting half a day due to wind, produced wide-open calico bass fishing on hardbaits in areas I’d driven past a hundred times while fishing yellows at the islands. As it turned out, the yellows bit at the island that day as well but we were having too much fun catching bass to bother chasing them. Just because the yellows or tuna are biting, doesn’t mean you need to go and catch them, sometimes catching a few bass is just as much fun. 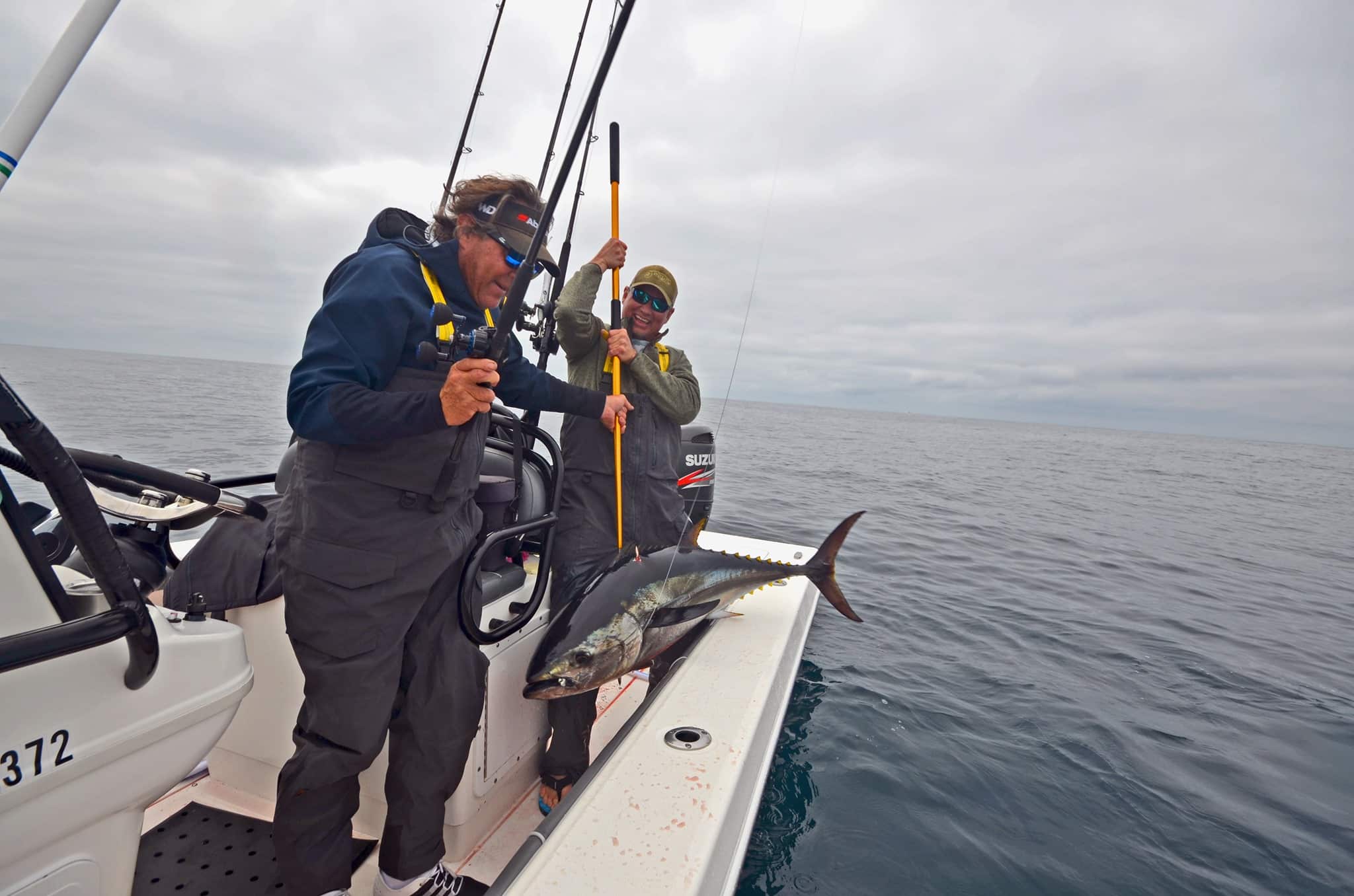 The tuna bite got pretty steady down in San Diego by early summer but Decker and I decided to bypass the sure thing and spend our time looking for our own tuna. There was a month-long streak of a consistent marine layer that never gave more than scattered glimpses of an SST or Chlorophyll chart so we were basically fishing blind. As a result, once we’d leave Newport Harbor we’d have to drive all over the ocean to check conditions and while we connected almost every trip, at one point we covered over 500-miles of water in three days of fishing. Why go through all of that effort? The high fives and backslapping that happens when you do finally find them gets more enthusiastic with every mile of water you cover. And on the days you miss, you can sit back and sip your post-fishing cocktail knowing that it wasn’t due to any lack of effort. 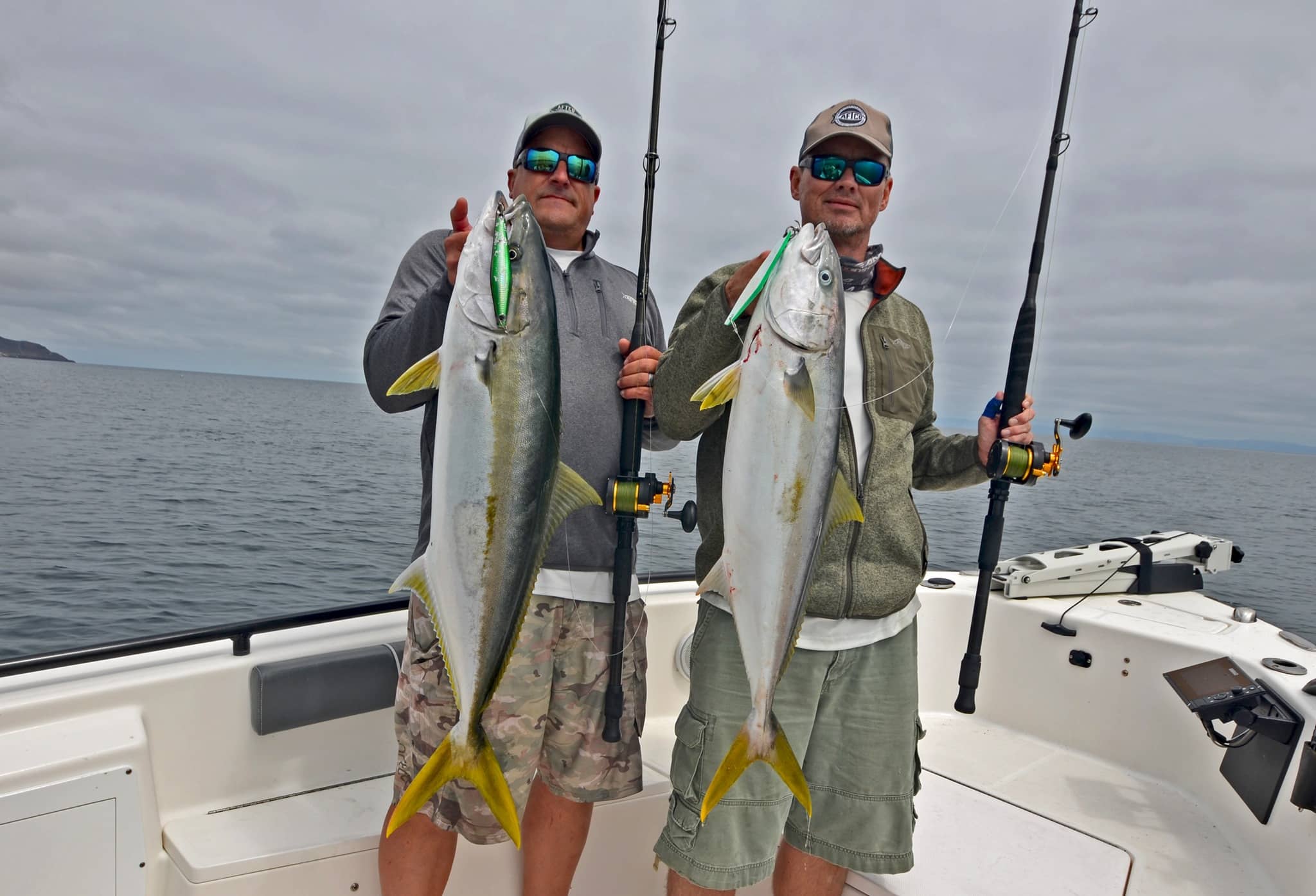 Once we got tired of chasing tuna, it was back to bass fishing with a side of bigger game. One of the good things about spending a lot of time running to and from particular spots is that you start to notice patterns that develop over time. Take Gold Bluff at San Clemente Island, which is frequently our starting spot when fishing there. A couple of years ago, we found a swordfish hugging the 100-fathom curve outside there and going forward kept an eye peeled when traversing that zone. Earlier this year we had the 50 to 100-pound bluefin come up busting along that same curve and stopped fishing bass long enough to run out there and catch one. After that, all moves from spot to spot along the front side of the island were made along that contour line and less than a month later we found a huge foamer of yellowtail in almost the exact same spot we’d found that swordfish several years early. If you aren’t noticing patterns when you fish, then you aren’t paying close enough attention. If you’re interested in learning more, I suggest reading this article. 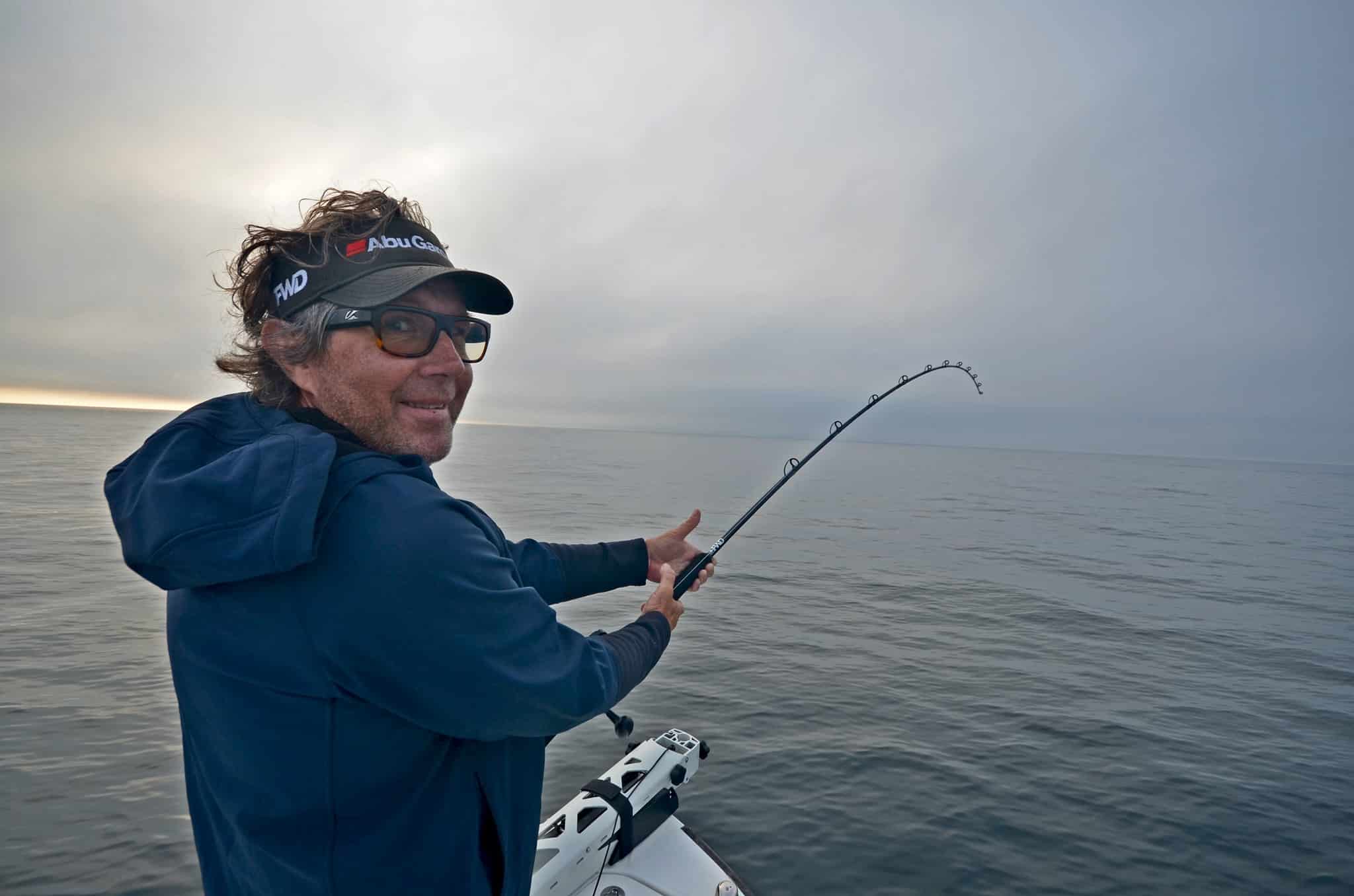 Marlin season was soon upon us and while we only released two local fish this year, we weren’t disappointed because local marlin fishing in Southern California is usually a low percentage play. For me, marlin fishing has always been more about the challenge of finding them and the competitiveness of the yearly tournaments. This year, the 80-foot Viking we had lined up for the Master Angler Billfish Tournament broke down, forcing us to downsize dramatically to Decker’s 24-foot Everglades but we still fished hard and had a great time. 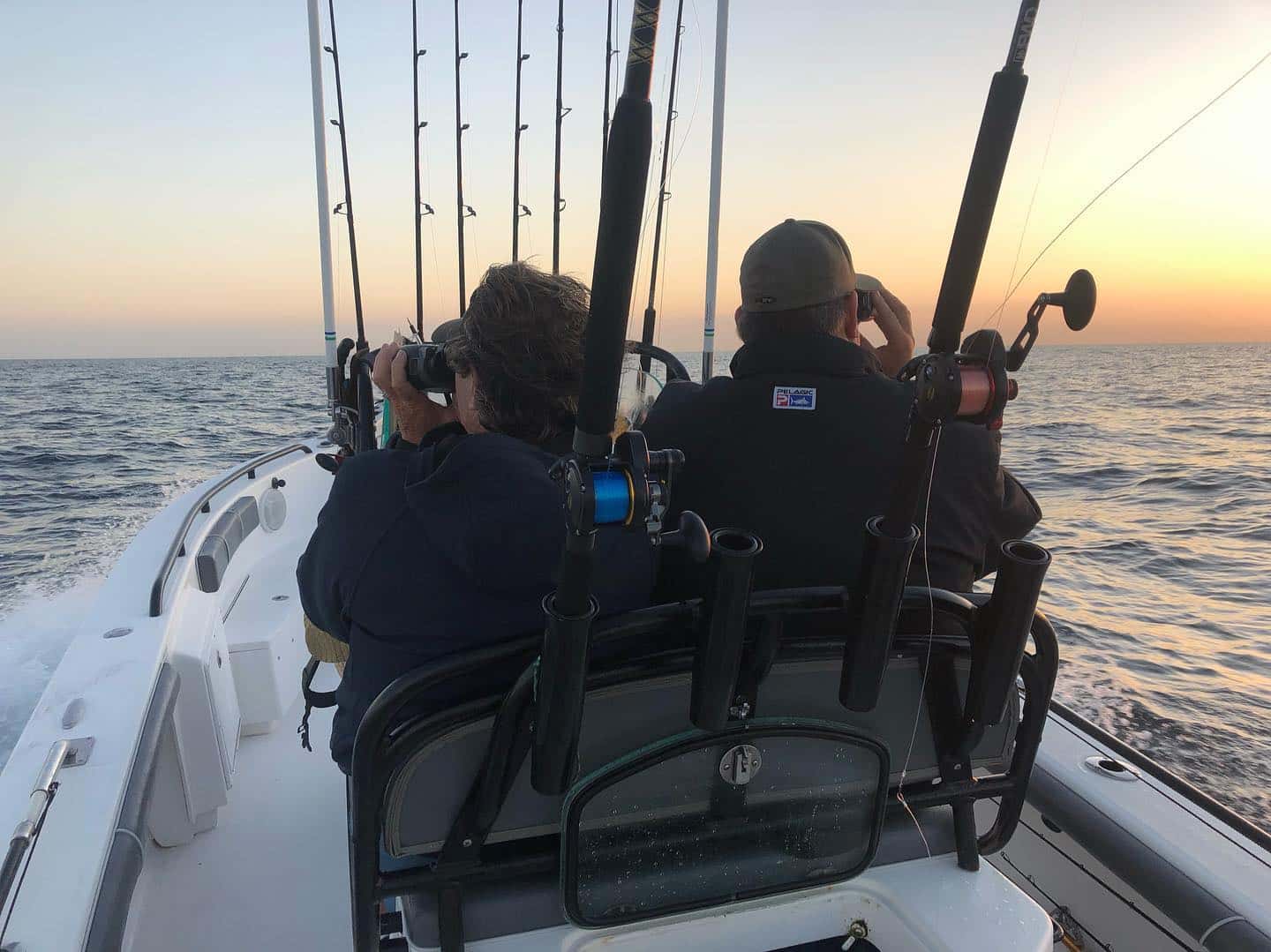 If you haven’t fished one, tournaments are grueling affairs for those who take them seriously. When fishing the bigger boats, like Bob Hoose‘s boat “Prospector” we used in this year’s Pesky, day one usually starts the evening before with a long run to the fishing destination. Decker and I shared an 8-hour wheel watch on the open bridge straight into the bucking bronco close interval swell as we motored from Newport to Santa Cruz Island. That was followed by sun up to past sunset fishing and a quick five hours of sleep before doing it all over the next day. Deep drop swordfish were the name of the game that tournament and our friends aboard the “Flying Fish” connected with a monster. 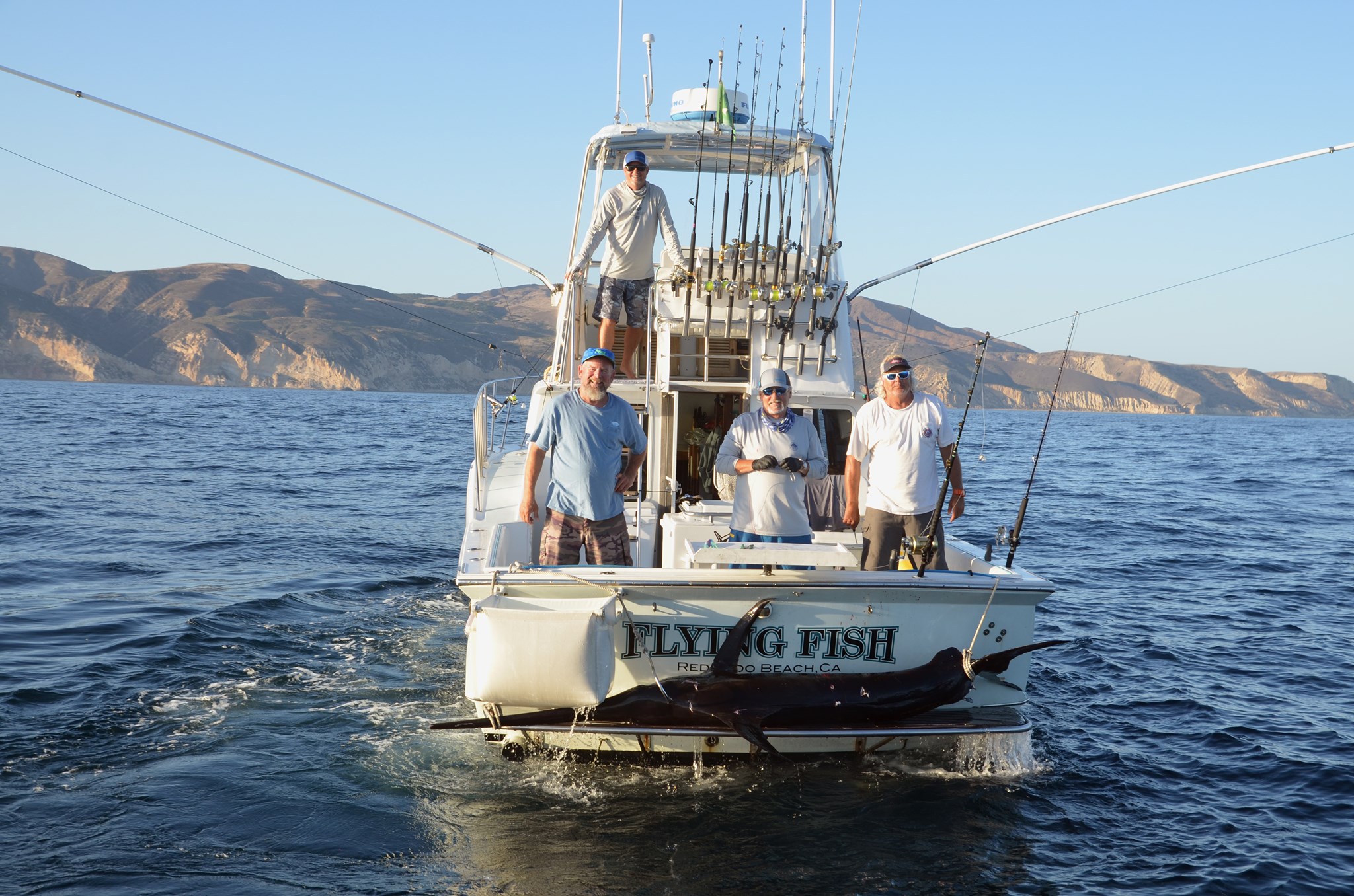 We stuck it out as Santa Cruz as long as we could before making the long run to Catalina for the awards and while we never got a deep drop bite, we didn’t give up. As we passed Santa Barbara Island, our teammate Pat Holmes found a tailer while running full speed downhill. A quick scramble to get a mackerel pinned on and a caster in the bow was followed by a hooked marlin, a short battle and the release of the only marlin landed during the tournament. If there’s one tournament lesson I’ve learned over the years it’s that as long as you keep fishing hard to the very end, there’s always a chance to succeed. Definitely something to keep in mind the next time you’re having a tough day (or two) on the water. 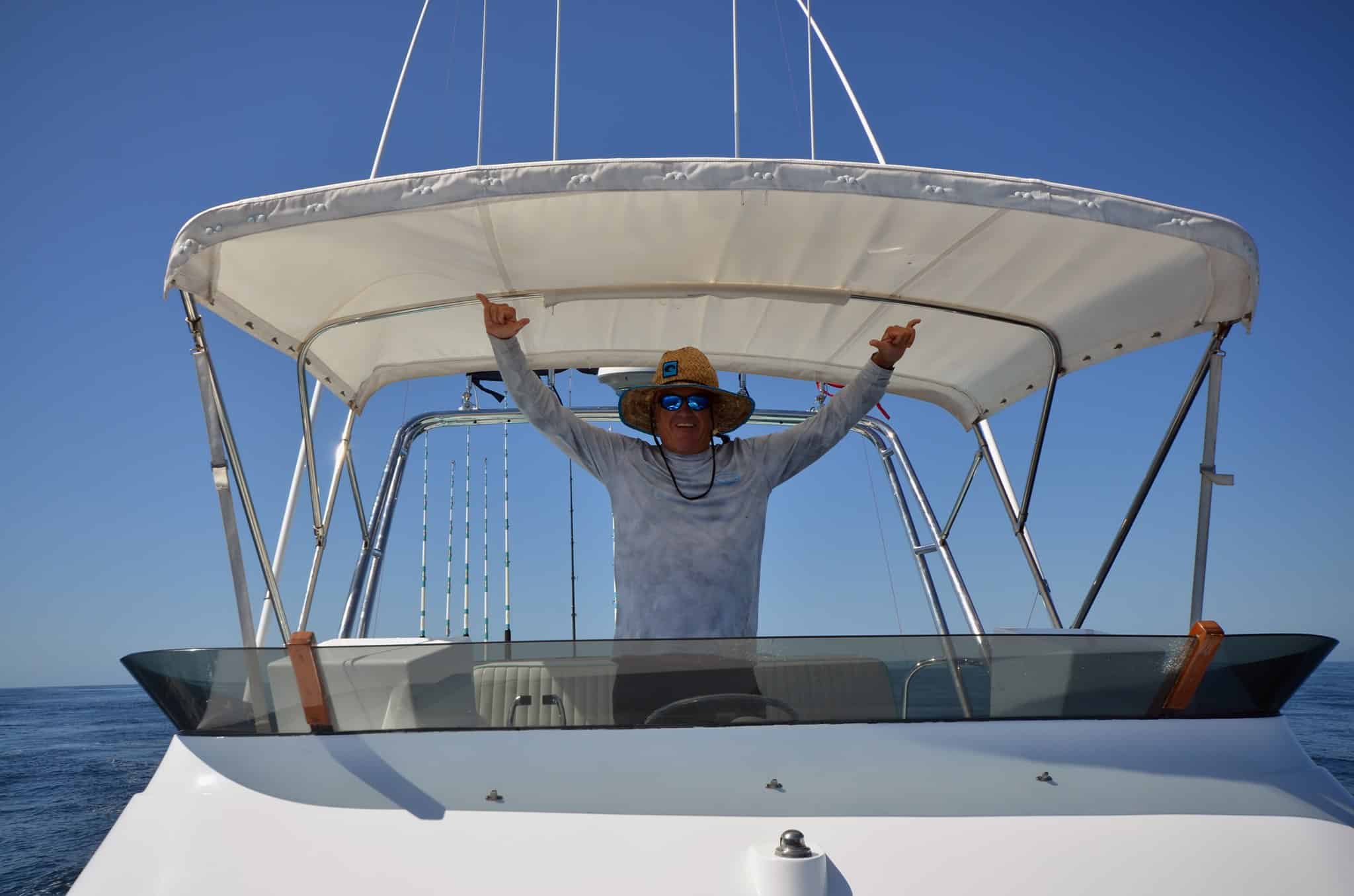 As we were getting back to the dock after the tournament, Decker got a text from Anthony Hsieh inviting us on a trip to Mag Bay in early November. The trip’s goal was to go down there and attempt to break the one-day marlin release record, which stood at 180-something fish. As the trip’s departure date approached, a boat called “Game Changer” fished down there and decimated the standing record by releasing 308 fish in a day, which had us questioning the feasibility of our game plan. As it turned out, despite never having fished together before, the eclectic group of SoCal anglers that Anthony had assembled performed flawlessly together as a team and managed to set a new record of 330 fish released on the first of four days of fishing. 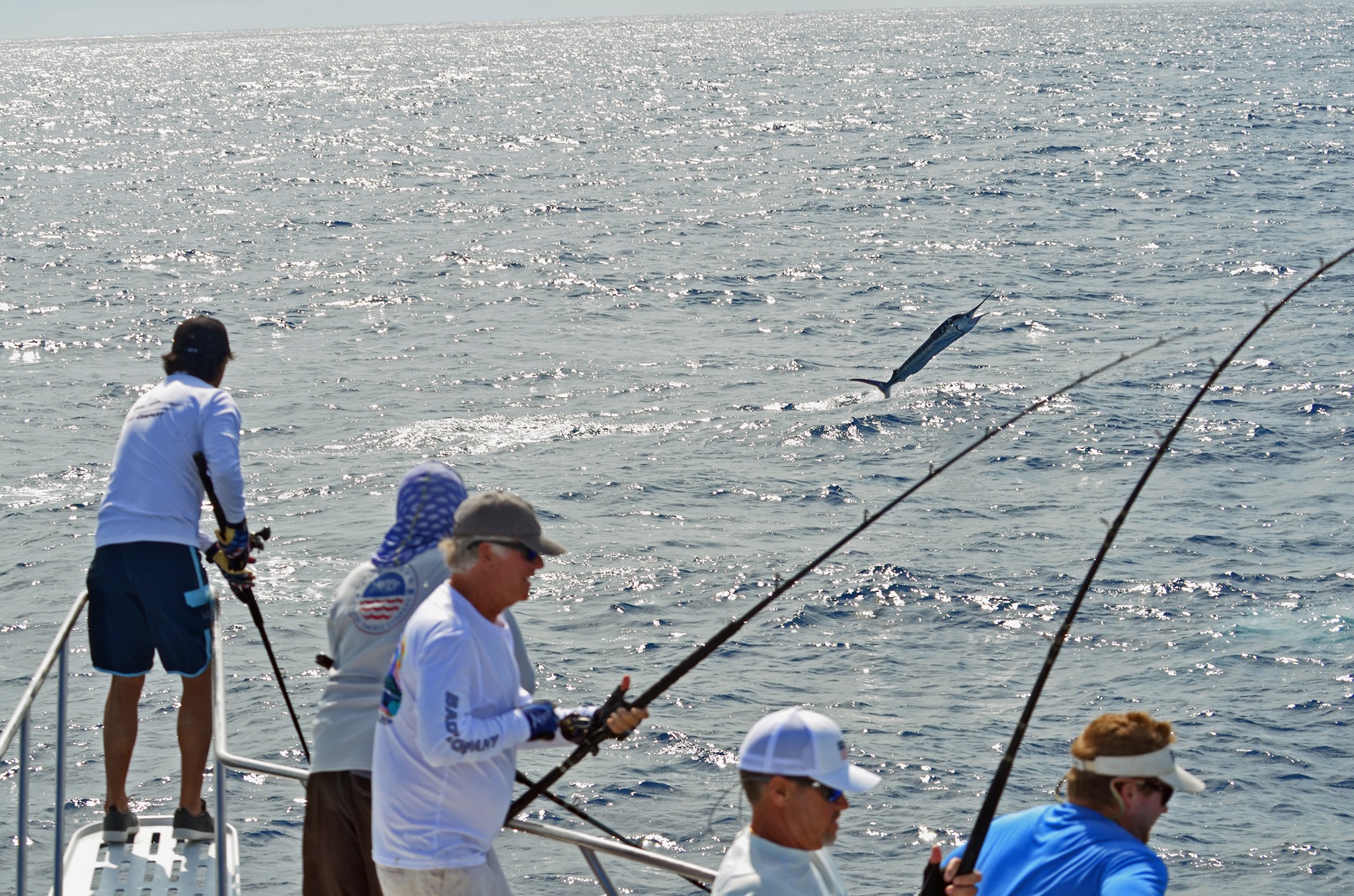 Beside us catching a lot of marlin, the trip was a blur of good food, luxury accommodations, cocktails and shared laughs with old and new friends. There was so much happening all the time that  it wasn’t until the trip home, when I happened to glance around the airplane at my fellow fishermen sprawled out and exhausted in the seats around me, that I realized it wasn’t only the marlin fishing that made the trip special. Just like it wasn’t the bluefin, or yellowtail, or even the reds I caught all those years ago, that made any trip special.

It really isn’t ever about the fish, so much as the feeling of satisfaction that comes along with sharing the water with friends while working on becoming a better angler. 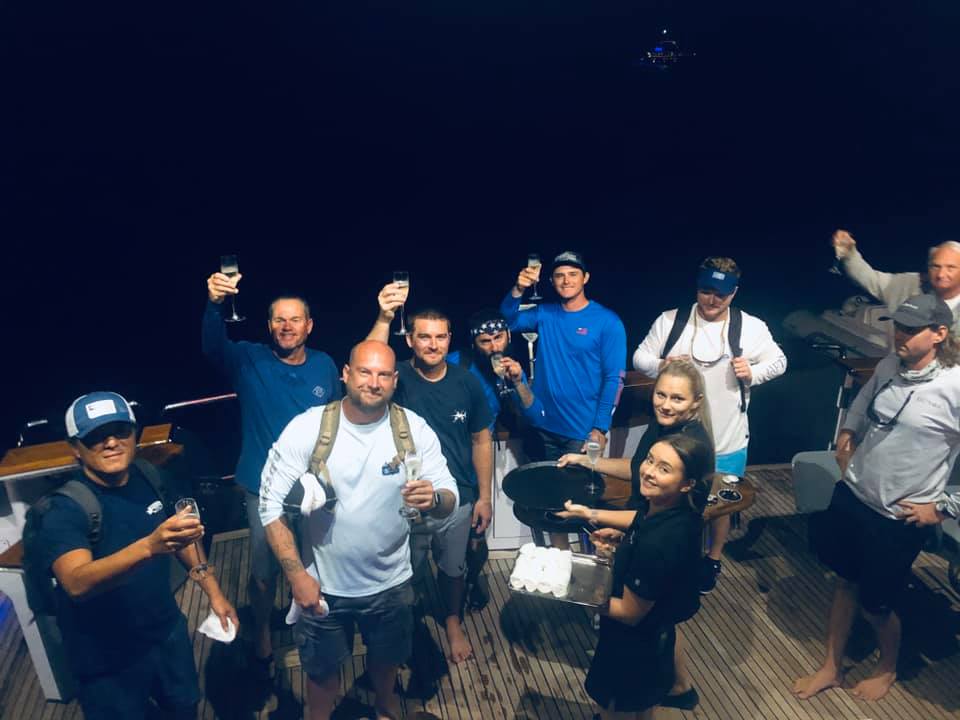 Regardless of whether your hoisting a glass of champagne on the back deck of the world’s largest sportfisher after catching 900 marlin, calling for the gaff while sharing the rail of a sport boat with 50 of your closest friends or standing on a dock and giving your buddy a high five over the nice spotted bay bass he just caught, remember that while the circumstances change, the joy and satisfaction all spring from the same place.

With that I want to thank you for joining me this year and I look forward to another great year, regardless of how good the fishing is or isn’t. Cheers!