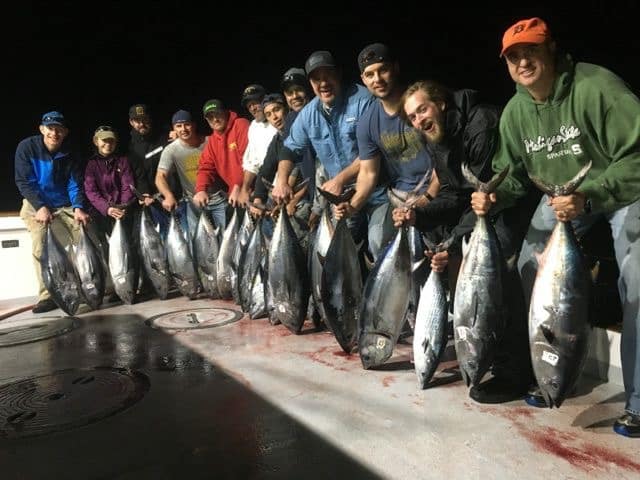 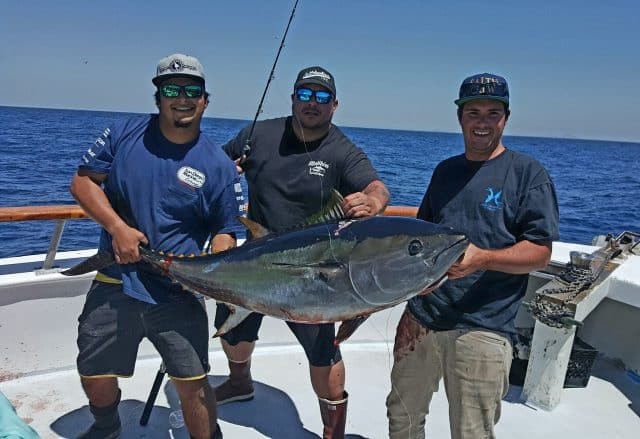 Well, the good news is that this week’s good weather lead to many boats scoring some nice fish. The bad news is that we’ve got a windy weekend ahead, with a late season rainstorm heading our way on Saturday night that will make for a rough ride to the tuna grounds. That being said, there are still plenty of options available for those who don’t mind fishing in the rain.

Big bluefin like the one pictured above, caught on the Malihini out of H&M Landing are still around and biting occasionally but the majority of the tuna caught this week have been the smaller 18 to 30-pound fish. The high count of the week came aboard the 3/4-day boat San Diego out of Seaforth Landing on Wednesday. Their 31 anglers caught 56 bluefin and 91 yellowtail.

If you’re heading on a 3/4-day or overnight trip out of San Diego you’ll want to be prepared for fish from 20 pounds to over 100. 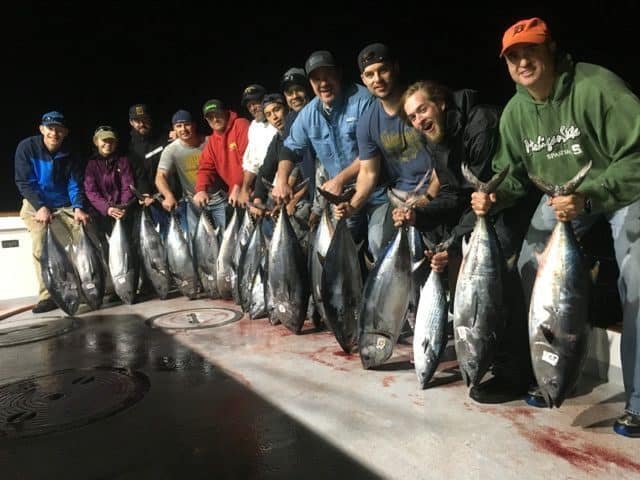 Captain Taro Takeuchi, owner/operator of the 3/4-day boat Liberty out of Fisherman’s Landing pretty much summed up what’s happening in San Diego when he reported on a trip earlier this week. “Had a few more shots at trophy sized tuna again today. Ended up with two over 100-pounds and one around 60-pounds. We are going to keep trying for these beauties as long as we feel we have opportunity. We will definitely fish for whatever bites, but this sized fish have been around, so come prepared with 40#-80# test along with your 25#-30# test and a trophy hunting mindset.” 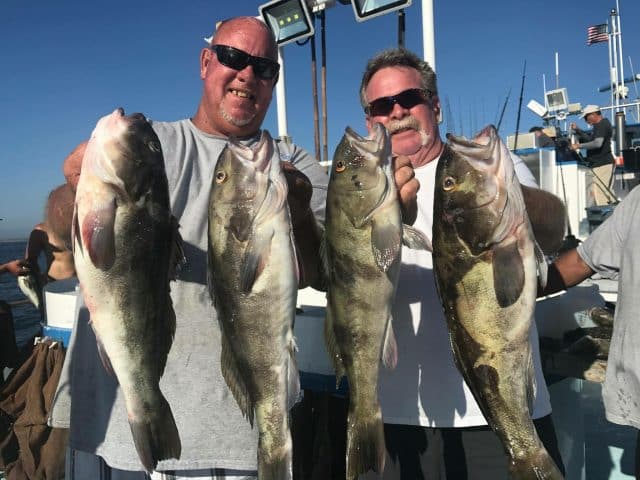 Like I said earlier, this weekend’s weather may have a negative impact on the offshore fleet’s ability to catch fish, so keep that in mind when booking a trip. The good news for those who don’t want to venture offshore in rough weather is that the bass are biting well along the coast for both sport boats and private boaters. The sport boats have catching their fish on live or fresh dead squid, so expect the usual lead head and squid bottom bouncing action if you jump on a trip. A lot of local boats are still fishing rockfish, so you might want to call your local landing to ask about bass fishing trips. 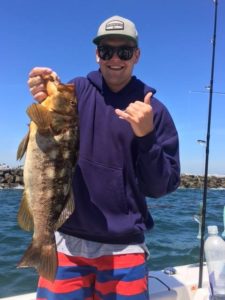 Private boaters have quite a few more options as the bass have been biting artificial lures very well in a number of locations. Captain Gerry Mahieu ran a trip on Wednesday taking his passengers to the breakwall and up to Palos Verdes. He reported excellent fishing on the hard baits with most of the fish being caught on the Lucky Craft Pointer DD100. He also reported water around 61-degrees at Rocky Point and as warm as 64.5 in front of Long Beach, which should be stable enough to withstand the windy weekend ahead. The bass are also biting both squid and lures on the artificial reefs in LA and Orange Counties.  The weather should be very fishable along the coast on Saturday and doable in certain areas on Sunday, but I highly recommend checking the local forecast immediately before heading out this weekend as it’s subject to change for the worse. 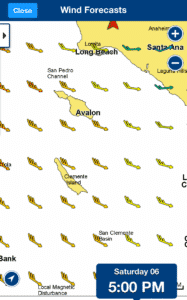 Finally, the yellowtail are biting really well at San Clemente Island right now. Both the Outrider out of 22nd Street Landing and the Thunderbird out of Davey’s Locker reported full limits of 10 to 20-pound fish with a few bigger ones in the mix. While it may seem if I’m burying the lead on this article, the wide open yellowtail bite is the best thing going on the coast right now, I’m reporting it last because the weather is going to shut this bite down big time. As you can see on this Navionics app, the wind is going to be blowing a steady 30-knots at Clemente on Saturday afternoon with winds to 35-knots between there and the west end of Catalina. With the wind howling all night on Saturday, boats won’t be able to make it out to the island to fish on Sunday anyway, so I’d just keep my fingers crossed that the water doesn’t roll to much and plan a trip to Clemente once the weather straightens itself out again.