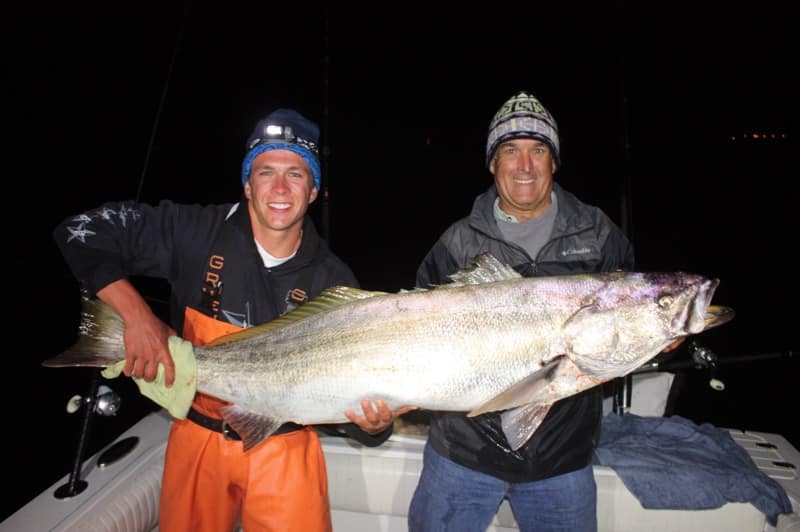 Another Season is a six-part series piggybacking on my doorstop of an article, “The Season,” in the current issue of The Bight. If you love seabass fishing, have thought about a career in outdoor writing, or considered guiding for white seabass or anything exotic, these words should set you straight.

For the Love of Seabass

At the beginning of the season there was no conceiving how April to July would play out for my favorite fish. The fin bait bites at the beginning; the hustle to have live squid for every trip in June; the run up the line to end the season in the last zone clinging to La Nina, where macking squid floaters humped the hull. Seabass, yellowtail and halibut hit the deck. A few days later there were lightboats and seiners and a cork line slapping against my hull. After three months of fishing seabass with styles not involving squid nests, I had spaced on this part of the game. When there’s mesh in the water, it is never the same.

I had scored limits in between a daylight set and the first lightboat on the scene getting wrapped in the dark, getting bit real fast after the sun went down before the commercial fleet went to work. But now I was in a sticky spot. I needed to find something new to finish the seabass season on. There had to be a new nest. Or maybe I’d try fishing the structure spots below the harbor with the squid? Now that the first coastal squid nest was getting wrapped, this thing was done. But going home wasn’t an option. The backyard water was hot and dirty. Uphill current had taken over. The red crabs that had been living outside 20 fathoms pushed into the kelp line. Any one of these things is enough to end a bite. Put all of them together and it is impossible to get bit. This is what sent me up the line.

The plan on the “it’s over” trip had been to fish halibut in the morning. With limits of seabass tucked in the kill bag, anything extra would be a bonus. I started working down the coast, stopping in previous squid zones. Nothing. Not a scratch. Trestles, mini canyons and flats all turned up a clean screen. There was one spot left to check. Still, I almost drove right past this little bay. I reminded myself, “don’t let being tired stop you from checking everything.” I made the hard turn to port. “Guys, we are going to try one more halibut drift.” Translation: I am going to check one more spot for squid and you are coming with me.

I don’t know if I found a new spot or just a spot that was new to me. But I knew that this was going to be the place to start that night’s trip. We’d see if someone else—or a little local crew—was already on it. Maybe they were slipping in after dark and out before grey. Blending in and not getting noticed is only easy when there’s a crowd. Seabass fishing, more so than any other Bight fishery, means that you have to be willing to live with misses. To be successful—at least on the charter front—you can’t have fear, or worry about judgment. Some trips are going to miss. You are going to get skunked. People are not going to come back after begrudgingly handing you four hundreds at the end. But if you can put people on huge seabass—preferably with no other boats around—you’ve got them for life. This is part of what makes seabass the ultimate charter fish.

Ken Huss had fished this zone with me a few falls earlier. We caught nothing. That next spring I took him to a slam-dunk squid nest I had found close to home. He caught a pair of high 50s. They were the biggest seabass of his life. Now, the decision was to try the new spot that night, or take him up the line where the definition of seabass fishing would play out: light boats, seiners, lots of noise, maybe a fish or two amongst the skiffs getting in the way of the guys taking part in California’s biggest commercial market. All of the above adds up to a lot of potential excuses. If a guy was going to mail a trip in, this type of set-up is the place to do it.

There was really no decision to make. The second I jigged the first squid off the little bait spot I knew that this was going to round out the season. Even if that first night missed, it looked too good not to try and put some time in. There was plenty of squid and sand and natural and artificial structure. A dream set-up; one of those ones where if I had to draw a perfect set-up, this would be it.

We didn’t get bit until after 11, but when the current started pulling uphill after low tide we got absolutely thumped on huge seabass, with everything going from the low 50’s to mid 60’s. No boats showed. With this caliber of fishing going on so close to a busy commercial harbor, if any part of the local crew knew about it they’d be fishing here for two-hundred dollar fish. For the next four nights it was just my boat and my two code buddies making the trek up from Oceanside. On night five a boat showed up. Ever so quietly we slipped four huge fish over the rail while they slept, using the pattern of low tide and uphill being the time to fish the hardest up high in the water column. And then, just like that, it was over. Well, not over. Josh Levine got a 57-pounder that was supposed to be bat ray number 28 for the night. After a night for truly nothing I went home. Two days later I went back out with a college buddy to give it a check. After getting home—post miss—I heard it turned into the “secret bite” of the season.

On the last train ride up I knew I’d have to get home soon, like it or not. All the interest had switched to tuna. I put together a 23-day offshore stretch, turning my back on what I’d rather fish for.

It was time to go offshore…