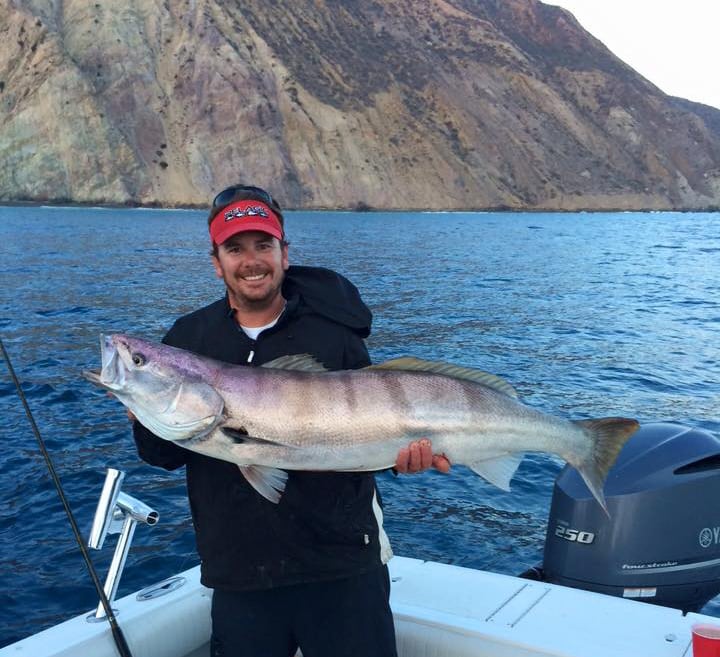 Almost everyone wrote seabass off this season. They said it was going to be warm water, no squid, and no easy squid nest fishing. “What are you going to do this season? Fish offshore?” Went the endless one-two punches. That line of thinking made sense. There was not much kelp for the fish to hide in. No real counts coming from sportboats, nothing to really try and run for. Magazine articles talked about how there wouldn’t be much seabass this year. Threads that popped up online had everyone chime in that this wasn’t the year to catch a seabass. I fed into the narrative of the non-believers, while being a realist with clients and potential clients:

“I love the set-up and welcome the challenge of fishing a coast with no squid nests. We won’t get as many, but it will be my definition of white seabass fishing.” Nobody found me. (Well, except for a little yellow boat that fished it two nights for one fish.) I only waived a few buddies in. Those that did try mostly bounced around plotter marks of squid nest gone by. Green underwater lights turned up red crabs. At Catalina, the best indicators—counts coming from the six-pack “fleet” that has withered down to two boats—didn’t show much in the way of seabass. And those who tried the local kelp lines only got reaffirmed that this style of white seabass fishing feels like the unattainable. This would remain the trend all spring and early summer.

Meanwhile on the beach I was wringing my hands leading up to my April opener. Not over concern or guilt, but about how juicy the set-up looked for my dream to finally come true. This was going to be the non-squid, structure and open-water finbait-based season I have been longing for. At least to start the season… I would have bet whatever chunk of my bankroll I had in the cage that this seabass season was going to work out just fine. I knew I could keep it to myself. And even when word would seep out, nobody else would have put in the necessary legwork to understand how the fishery has shifted away from the squid grounds… Two weeks of recon after the Del Mar Fred Hall Show gave me the foundation I needed to build a two-month seabass season on: a handful of big tankers, a rewiring of both my brain and the local structure, and a clue as to how the fish were transitioning in and out of the deep-water bait balls while preparing to spawn. My number one goal was to learn how the fish would react to all the red crabs. Do seabass even eat red crabs? Would these red crab “fields” help or hinder?

Given the warm water my goal for the season was to hit 100 seabass by July 19.

If I could do that with clients, this year, after coming off the best season yet (read: plenty of squid nests and being there from day one on for three out of four of the big bites, giving me over 250 white seabass) I knew that I could make it any season. April was all about finbait. San Quintin came to town. Open water bait balls held the tankers. When that went away with the moon, I knew the fish would either go deep or move into the kelp. Or both. I found three schools of fish. The bulk of it was 28 to 35-pounders. These were new fish, fish we haven’t seen on the coast the past five seasons, croakers that would kick out plenty of trips for limits. Then there was the school that we’ve been pounding on since 2010. They were 40-pounders then. They are 49 to 51-pounders now. Some nights—yes, it turned into the night deal as the water warmed—the 30’s and 40’s and 50’s balled up and swam together. It would be three-fish for three passengers one night in 20 minutes, nothing the next. With no squid grounds, fishing the coast started to feel more like fishing Catalina. I started letting that day’s tide and conditions guide me, more so than where the last good bite happened. Aside from a few buddies that I waived, still nobody showed. And I just bit my lip when the unsolicited write offs—and texts starting with “I heard…”—came rolling in. “It’s been slow,” became my knee jerk. Then the water rolled over in early May. I leaned on Catalina to make trips. She treated me well. Still, the beach was where I wanted to be. Brain drifts always started with, “Is the April fishing going to be it for the season?”

I knew it was going to come roaring back, with big, pissed-off females that wanted to spawn on the April moon.

Pent up and ripe, these fat girls were going to put us to the test when the water got back to 63. Run ins with the biggest fish I’ve ever seen were going to take over… Heading towards the new moon in May, all the jockeying around had taught me more in three months than I had learned the past three years. It also helped me find the school I’ve wanted to do battle with the last three years. The straight, big 50s to high 60-pounders that normally are the privilege of the divers.