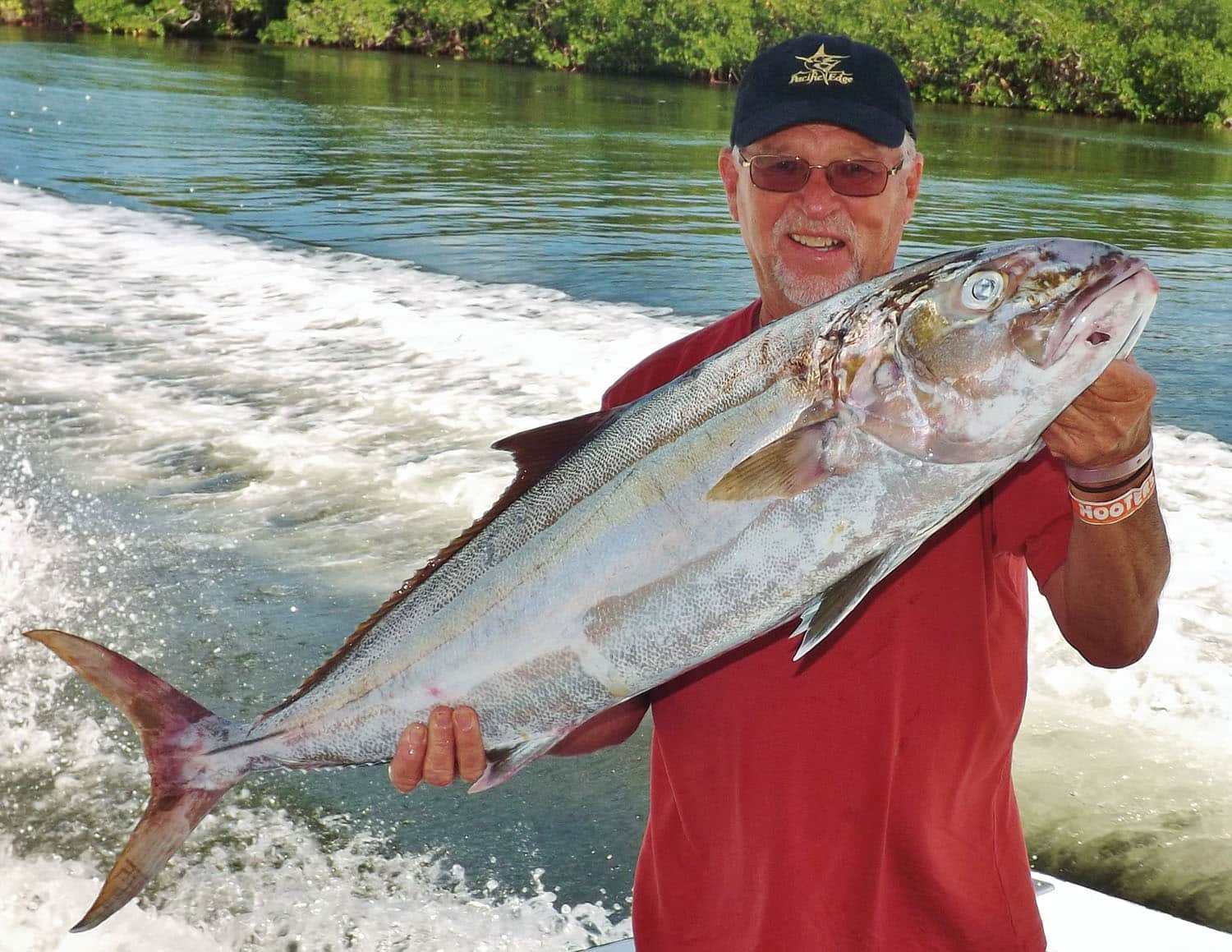 Any time I travel to somewhere near water there’s always this desire to get out there to see what’s biting. And when it’s warm saltwater, then urge can be almost overwhelming like it was on a recent trip to Cancun. When we first planned the dates and made the arrangements the fishing aspect was pushed to the back-burner as there was so much other stuff already on the schedule. But once we were there and it turned out our last full day was free a little recon highlighted the fact some good “junk fishing” was within reach. My friend Allen and I booked a couple of spaces on a 6 hour open-party trip for Sunday.

Mid-week a tropical wave passed right over the Yucatan and we had a couple days with lots of wind, embedded heavy showers and some spectacular lightning displays. But fortunately it blew through, conditions straightened out for our trip and we headed out in good weather with just a few showers around… The captain’s plan was to run out to the bait grounds , catch a tank of bait and then keep rolling…the same scenario I’ve seen play out on hundreds of trips.

Once we got to the area off Isla Mujeres the captain slowed down and began to zig-zag back and forth across the shallow reef. The sabiki-like bait rigs with no sinker at all were dropped back about 50-60’ and trolled right on the surface with the deckhands adding a rapid jigging motion for extra action. All of our preferred bigger blue runners were on the weightless surface rigs and only small ones bit a traditional application of a regular sabiki with a sinker. There’s nothing like local knowledge!!!

With 30-40 baits in the tank (sadly not a Pacific Edge model) we ran about another 20 miles offshore to an area of hard bottom and rocky outcroppings in about 20 fathoms. From watching the guys rig the gear I thought we would be just drifting some baits across the zone. But then the guys went below, dug out a downrigger, mounted it and hooked on a 12# ball. Then an old Penn 9/0 loaded with 80# and mounted on a heavy rod came out. I immediately got a bunch more interested as this had the look of something different than expected.

The terminal rig was a circle hooks with the addition of about a 6” piece of copper wire twisted to the bend of the hook. When it came time to drop in a bait they would carefully run the copper wire through the eye sockets and then make a few turns around the hook and then spin the hook a few times to tighten it up. The downrigger bait would be dropped back about 50’ then clipped in the release and sent down to about 20’ off the bottom.

Our boat was a single diesel with an oversized rudder which made it highly maneuverable. As a consequence the captain was able to work each spot thoroughly, making quick tight turns to keep the deep bait in the zone. With only one rig down there were no worries of tangles and he was able to be very precise in positioning. All the while Charley would keep his hand on the wire to feel the “Snap” of the release when we got bit.

As soon as he got the signal we dropped back lighter 40# rigs with 3-6 ounce egg sinkers on 80# leaders with the same circle hook/ wire setup. The fish hooked on the downrigger setup had the school following it up and they met our baits dropping down which resulted in more hookups. It was a deadly effective system.

Our main targets that day were the schools of hard-fighting amberjack that called the reefs, rocks and ledges home along with some other bottom grabbers. On a trip to Panama a few years back one of the guys on the boat had made the comment that a/j’s “Were like yellowtail on steroids” and it’s so true….those things pull extremely hard!!!

Most of our AJ’s were 18-25-pounds with a couple over 30. On one stop I hooked a good one on some lighter gear and was on it for a long time; too long in fact. I had the fish at deep color when all of a sudden something didn’t feel right. From up on the bridge the captain could see the issue and he summed it up in one word… “Barracuda!!!” A big bastard had swam up and chewed off the whole tail!!!

I was totally impressed with the knowledge of the crew and the teamwork involved. The guys were at the top of their game and it was reflected in the fact we all had a blast that was over way too soon. But on the run back to the marina while the others dozed I had plenty of time to reflect on how similar this aspect of their fishery is to some of ours.

What we’ve experienced these past couple of winters with our tanker-grade yellowtail on deep structure closely parallels their amberjack fishery on the edge of the abyss. I’m always on the lookout for new and innovative techniques and I can envision using the downrigger in exactly the same manner to find the biting fish. Locations like the structure outside Rocky Point, the 150 (the epicenter of last winter’s action) and off Box Canyon are all naturals. And then there are the bait grounds at Catalina and the other islands. And I can also imagine how effective it might be dropping back live squid when they make their reappearance.

With the warm water still in place and a bunch of big yellows still around it’s looking like it’s going to be another interesting winter!!!