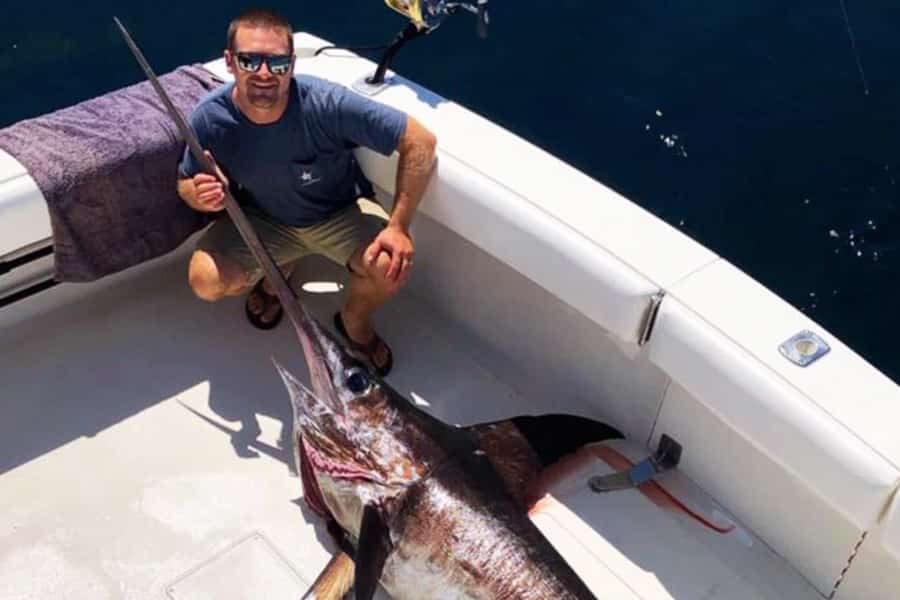 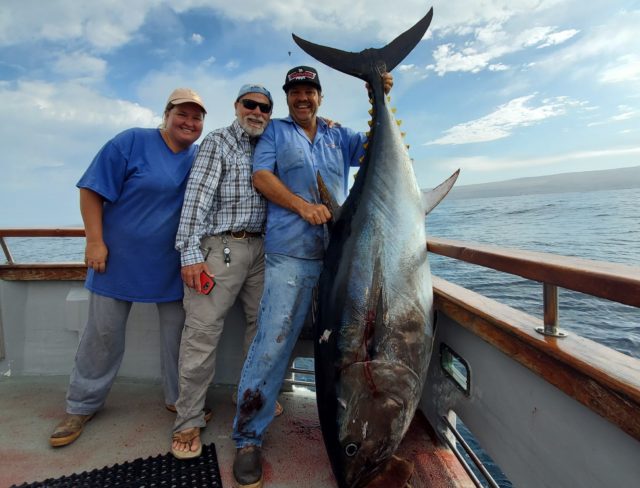 Well, it’s been another amazing week of offshore fishing across much of Southern California but before I get into the details I’d like to talk about something I mentioned in last week’s column. In recent weeks there had been enough deep drop swordfish caught that I thought the fishing method might come into play at last week’s Balboa Angling Club Master Angler Billfish Tournament. That assumption turned out to be an understatement as swordfish ran away with the event. With 40 boats fishing the event, there were 7 marlin and 6 swordfish caught. While half a dozen swordfish may not sound like a lot, it’s six more than had been caught in all of the years I’ve fished the event combined. Even more remarkable, the winning boat Kea Kai captained by Jock Albright hooked five and landed three while fishing off the Channel Islands, with Jock’s son Charlie actually landing his two fish limit on day one. Unreal. 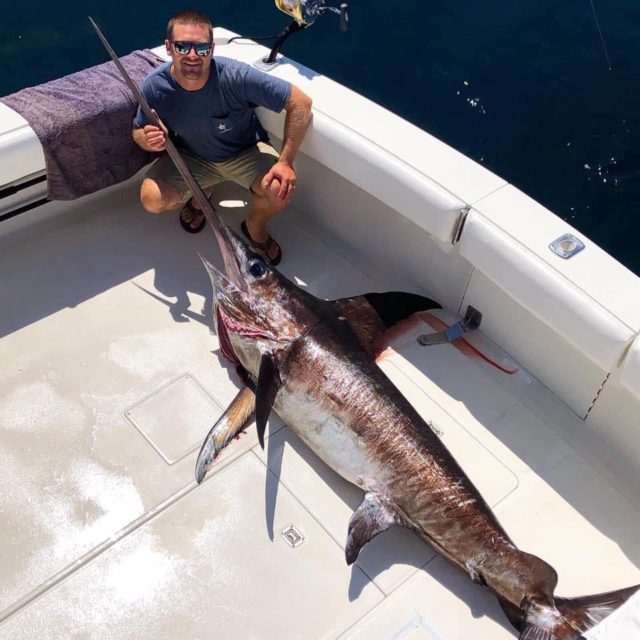 Decker and I even tried deep dropping off Newport Beach and while all we landed was a 500-pound big eye thresher, there were swordfish caught in that same spot earlier in the week. With the Los Pescadores billfish tournament happening this weekend, I’m guessing we’ll see more swordfish caught. If you’re reading this on Friday, wish me luck as I’ll be out there fishing the tournament. I’m predicting that what we’re seeing is just the tip of the deep drop swordfish iceberg and I think that by this time next year, this will be the next big deal. If nothing else it will give you guys something to fish for when the bluefin leave. As for me, I’m curious enough about it that I’m building the right rod to do it but I’m probably going to make Decker wind in anything we hook down the road. 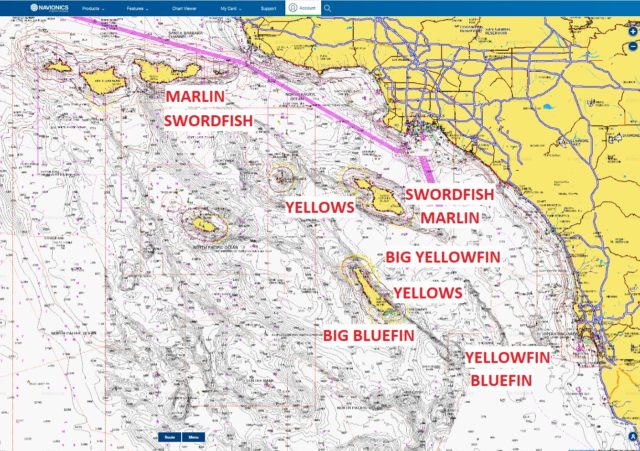 This week’s Navionics Chart tells you everything you need to know offshore but I’m going to add some inshore detail. Up north, the marlin and swordfish have been biting around Santa Cruz Island but there are some yellows biting there and at Anacapa as well. The dirt clod hasn’t gotten much coverage but I’d bet there are a few marlin hanging around the nearby high spots and there are probably some yellows at the island to hook and feed to the sea lions. My friend Brandon Vulgamott is talking about running to Nic this weekend since the rockfish bite was so good there the last time he went, but I think he’s crazy to be running that far on his center console. 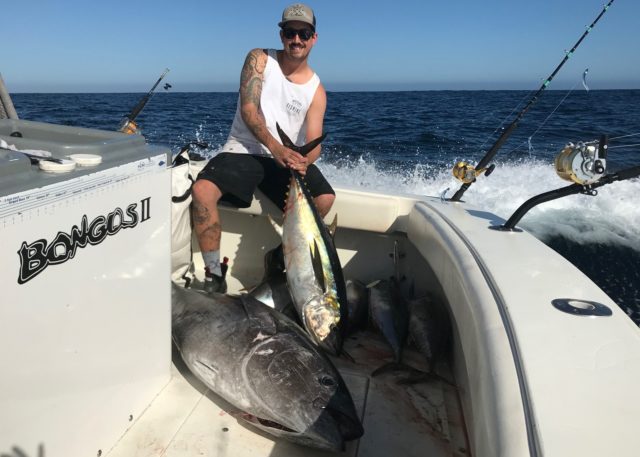 The big bluefin are still biting on the backside of Clemente and some guys are slaying them. The Thunderbird out of Davey’s Locker had a two-day trip this week, hooked a bunch and landed a few fish up to 300-pounds. After spending two days watching the private boats fish around him, Captain Jeff Markland reported being appalled at their behavior and pondered how people so clueless managed to navigate their way through life off the water.  While I don’t feel as strongly as he does about it, I often wonder at the thought process (or lack thereof when people go fishing). On Saturday I was fishing marlin below the 14 and through the binos watched a private boat drive straight out to the waypoint for the high spot, stop and start fishing. There was no metering around, no trolling, no glassing, no nothing – just drive straight to an arbitrary number and start fishing.

While this was bad, what happened next was worse. A boat that looked like it was running from Dana to Catalina saw that boat stopped, changed course and pulled in next to them to fish. That boat was followed by another and then a fourth that had divers aboard. Within half an hour there were over a dozen boats clustered up in a mini gang bang and no one was catching a thing. So, next time you see some boats grouped up on the horizon and feel like running over and trying your luck, remember that these boats were grouped up around someone who had not only not caught fish but had no idea of what he was doing. Just food for thought. 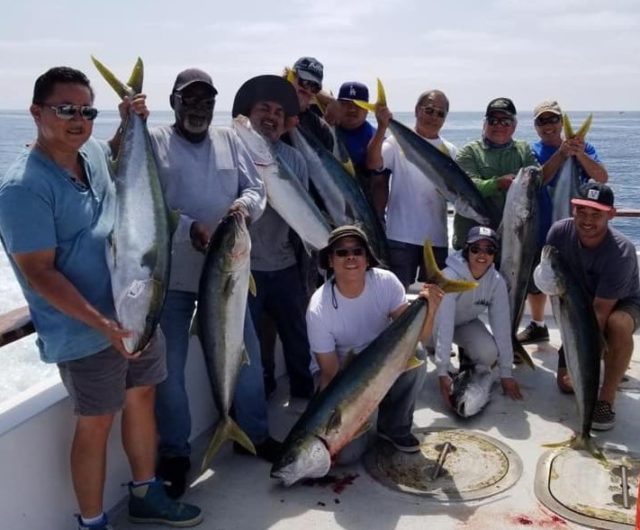 Getting back to business, there are some schools of bigger yellowfin inside San Clemente Island and the fish are mixed from 30-50-pounds. If you’re lucky, you can do what the Bongos II did on Wednesday and go out, score a big bluefin off the backside and then find some cooperative yellowfin on your way home. There are some good-sized yellowtail being caught at Catalina Island this week and from what I’ve heard the bass fishing along the coast rebounded a bit. Finally, the yellowfin and bluefin are still biting for boats fishing out of San Diego and it’s still hit and miss but there are enough hits to buy a ticket and take a shot.