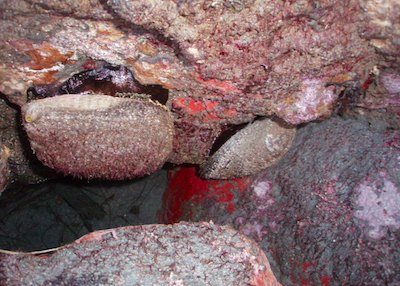 The California Fish and Game Commission will consider emergency action on Thursday, September 15 to possibly close the abalone fishery along the northern California coast. This action is being considered in the wake of confirmed reports of dead red abalone and other invertebrates on beaches and inside coves along the coast in Sonoma County.

The Department of Fish and Game (DFG) is currently attempting to assess the impact of the situation and will provide the Commission with information at this Thursday’s meeting. Based on DFG’s report, the Commission may take emergency action to close the abalone season along all or parts of the Sonoma coast.

There was an abalone die-off along the Sonoma coast beginning August 27 as a result of a red tide-induced poisoning and/or lack of oxygen. According to DFG biologists, these abalone deaths coincided with a local red tide bloom and calm ocean conditions. Although the exact reasons for the abalone deaths are not known, invertebrate die-offs have occurred in the past along the northern California coast when similar weather and bloom conditions existed.

The number of dead and dying abalone is not known but DFG divers are assessing the damage this week via underwater transect surveys. Reports of dead abalone and a variety of invertebrates have come from Bodega Bay, Russian Gulch, Fort Ross, Timber Cove and Salt Point State Park. Other DFG biologists and game wardens have collected abalone, mussels and water samples since the beginning and are continuing to document reports from the public.

Abalone fishermen are advised to contact a physician immediately if they feel sick, and to report symptoms to the local county health department (www.sonomacounty.org/health/about/publichealth.asp). The latest red tide updates from the California Department of Public Health are also posted online at www.cdph.ca.gov/programs/Pages/DDWEM.aspx.