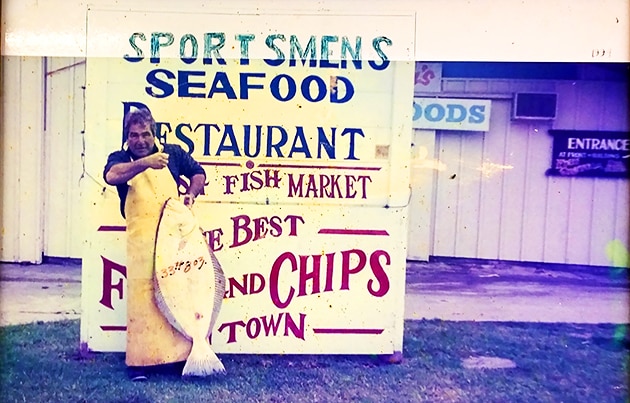 The fishing fleet lost a remarkable member of its tight-knit community on Dec. 2 when Mario Ghio, owner of Sportsman’s Seafood on Quivera Road in San Diego, succumbed after a debilitating battle with cancer.

Ghio was admired by his peers who described him as many things including family man, friend, fisherman, legend and pioneer of the industry.

He was always a gentleman who looked after his customers and employees. “I’ll never forget your radiant smile, friendly wit and sense of humor. You were the most welcome customer at Southwest Cargo, easy to please and be around. What started as just a business relationship grew into a friendship. I’ll always smile when thinking of you,” Vincent Cinquemani, El Cajon, California wrote about his friend. Many first encountered him at his wood stand with the name MARIO’S inscribed under Sportsmen’s Seafood in the largest red letters. He waited at the wood stand in the parking lot with a quizzical smile, offering his custom fish processing to passengers coming off the San Diego sportfishers when they returned from a trip. Rain or shine, it never seemed to matter anymore than the time of day. Mario was eager to please.

“Mario was a uniquely wonderful guy. I will think about him and I will miss him every time I return to Fisherman’s Landing from one of my long range fishing trips,” Vincent Biondo, Jr, Del Mar, California wrote.

A modest man, it was only after many such meetings before many came to realize this devoted family man had worked on seiners in his younger years, had once earned his captain’s 2000-ton uninspected certificate awarded by the U. S. Coast Guard and that he was a descendant of a family that had been in the fishing business for the past four generations. Early in life he worked shoulder-to-shoulder fishing commercially with his father Mingo, who taught him how to net, trap, and fish with hook and line, plus local knowledge, conditions, fishing techniques, fish handling and storage.

His approach to life was infectious. Friends, family and even strangers quickly understood how important life was to him and that he was going to live it to its fullest.

“Mario has been a great friend of mine for the past 40 years,” Ken Brass, El Cajon, noted. “His death is a real loss to his family, friends and the fishing community he has helped and has shared his laughter and great food and drink with. We will all miss him dearly.”

“I used to ride the day boats exclusively, and whenever I had a good catch, I’d take it to Mario for processing. I loved the way his smoked fish tasted. One day he gave me a tour of his plant and I saw the old-fashioned brick smoker he used to make naturally-smoked fish and his world-famous tuna jerky.”

said Mario. “It may be the only one of its kind left on the West Coast.” The old wood-fired brick smoker uses hickory and mesquite charcoal, and, of course, his own secret brine solution. Mario’s was the only natural charcoal process being offered. Each batch was custom-made to order. Tuna jerky was tastier, spicy and slightly chewier than smoked fish, because it stays in the smoker longer.

Although I never had the chance to become a close friend of Mario, I ran into him a few times. He shared my love of the Baja beaches and we swapped a fishing story or two. I always had the feeling that if we sat down together there were some Baja stories he could share that would be of interest to other Baja anglers. I just waited a bit too long. I wish I had more to add to his story. He was a good man … well respected and loved by the fishing community … who left a lot of fishing on the table.

I admire the good life he lived and the family he left behind.