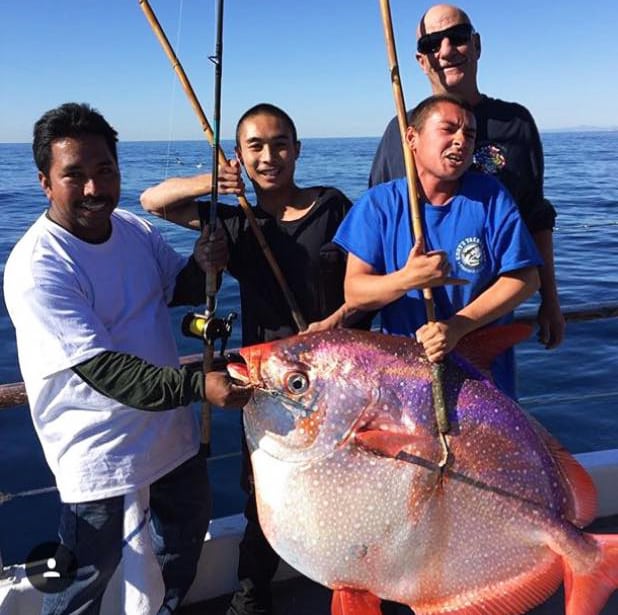 Yellowfin tuna, bluefin tuna, skipjack tuna, striped marlin, opah, yellowtail, white seabass, halibut, calico bass, sand bass, spiny lobster, bonito, lingcod, rockfish, sheephead…these are all fish that have been caught or reported seen by the sportboat fleet here in Southern California this week. By the way, it is now officially winter. What’s even more remarkable is the fact that we aren’t talking about multi-day trips deep into Mexican waters. These fish are all “locals.” On Tuesday, December 1st, the San Diego posted Mexican limits (5) of yellowfin tuna. DECEMBER 1st!?!?!

I’m not really sure what to make of it. I’ve never seen anything like it. This time last year, tuna was over. The hot bite was yellowtail off Malibu and the Coronados. I did see a marlin get hooked during that bite which was exciting. From a lay weather-person’s perspective, it would seem to be safe to say that our current El Nino event is peaking. It made me curious to poke around and see what the experts are saying. The general consensus seems say that we are likely to see these conditions last through Spring 2016, but with this event being the largest on record, some are saying it could last into Summer.

What does that mean for us, the salty anglers of Southern California? In weather related matters, my go to professional is none other than The Fishing Weatherman, Chris Dunn. Chris is now working for the NBC affiliate in Mobile, AL, but his heart is in SoCal and he’s always keeping tabs on our weather and how it affects us fishermen.

Q:For starters, Chris gave me a quick background on what an El Nino is from a meteorological perspective.

A: “El Nino is NOT defined by what is happening in the waters off the California coast! While we have had two warm water seasons, with this year bringing unprecedented fishing (marlin, wahoo, late season tuna), that may be only loosely related to what is truly known as El Nino, which is a warming of the ocean waters along the Equator. When that happens, roughly 2/3 of the time we see warmer than normal waters off our coast. Not all El Nino events are the same, in duration or strength. This one is currently being deemed as the strongest on record, we can look back at the last two strong El Ninos as an analog, guidance for what we may expect this winter and the future.”

Q:How were those events similar or different than the current El Nino?

Q:Based on what happened last time around, what do you think we can expect to see in the coming months?

A:The current El Nino is forecast to peak from now through January, then rapidly back off, returning to “ENSO Neutral” (El Nino Southern Oscillation) conditions by next summer. The primary impact on west coast weather is during the winter months, as the Pacific storm track is energized by the subtropical jet stream and what’s referred to as an atmospheric river. You may have heard the term “Pineapple Express” or “Hawaiian Pipeline.” Those are terms to convey the strength and impact of this wintertime phenomenon.

Q:What does it all mean for our fishing?

A:Based on personal experience, the year after the big 1983 season brought us phenomenal albacore fishing off southern California. Alba-what? Something I have been saying the past two years now…I think IF we get a big winter storm season, it could be enough to knock the eastern Pacific back into its normal routine and the albies will hopefully find their way back to our offshore waters. They’ve been absent for a half dozen seasons in the past…and eventually came back before. No reason to believe that won’t be the case again as long as conditions are favorable for them to return, which means cooler water than we have seen in recent years.

In 1984 (after a big El Nino), we had great albacore fishing. What about 1999, the season after the OTHER strong El Nino? According to a 2001 California DFG report, “In 1999, the stock took a more southerly route as it neared the U.S. Pacific Coast and spent much of the summer and fall in inshore waters off southern California and northern Mexico, where commercial passenger carrying vessel anglers landed a total of 258,448 fish – the highest total on record.”

Thanks Chris! So there you have it, don’t put your gear away, just dust off your rain gear. And get your anchovy (for albacore) game in order. It will be really interesting to see how things shake out, but it looks like we’re in for much more still.