The “One Surf Fly” stems from the famous annual One Fly Charity Trout Tournament held in Jackson Hole, Wyoming in the shadow of the Grand Tetons. In One Fly tournaments, anglers choose to use a single fly; if it’s lost – whether on a fish or a snag – they are done for the day. 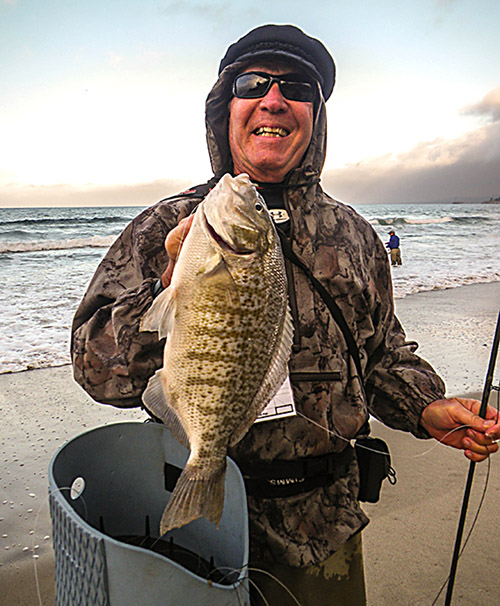 For the uninitiated, this saltwater flyfish only, surf competition – the OSF – is a free event … a fun fundraiser held on a beach annually.

The only prerequisite is that you show up with a fishing license and one fly.

Each entrant submits one fly that is recorded, approved by the OSF team and is placed into a brown paper bag. Flies generally imitate sand crabs, red or orange worms. This saltwater fly fishing surf competition typically attracts a crowd of 50 to 75 fly-flingers. 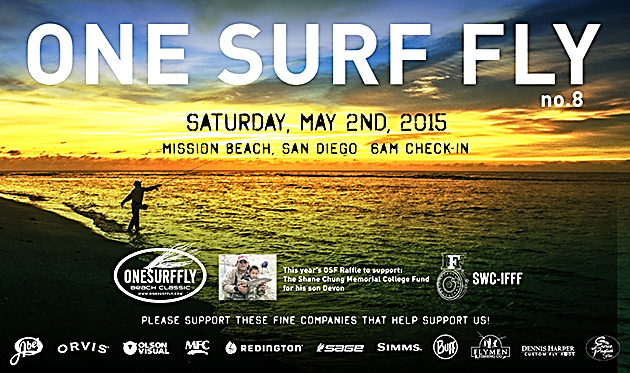 Scheduled for Saturday, May 2 at Mission Beach, check-in begins at 6 a.m. with competition from 7 to 9. Rules are simple: everyone draws one “mystery” fly from the brown paper bag prior to the start of the two hour contest. Anglers have no idea what fly they will be fishing and tippet size is optional. Each participant might be fishing a fly they may never have dreamed of fishing, which levels the playing field. Lose the one fly and the day is done. The score recorded prior to the lost fly is the final score.

The competition is more about camaraderie, making new friends, renewing old ones and just enjoying the morning.

“Fishing a new fly, winning a trophy for first fish, biggest fish and most fish and the fly-tier (of the selected fly) wins swag,” Al Quattrocchi, better known as Al Q, commented. 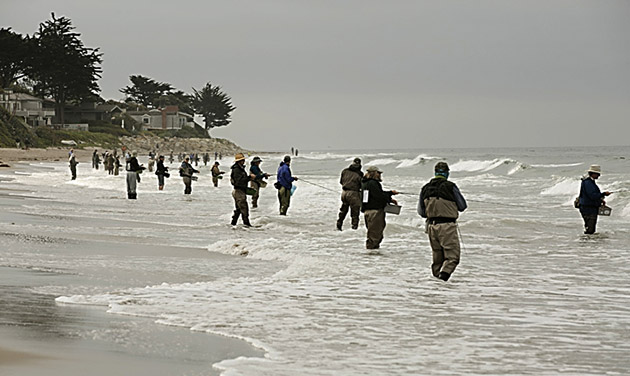 Shane Chung, who died last year at age 46 from a sudden brain aneurysm, had assisted Al Q with the One Surf Fly Beach Classic from its inception. A Memorial Fund was established to raise funds benefitting Chung’s son, Devon. All of this year’s OSF Raffle proceeds will be added to the fund to assist with tuition for Devon. The OSF raffle will be held at So Cal Flyfishing Outfitters between 10a and noon!

For more information about the One Surf Fly event: http://onesurffly.com/