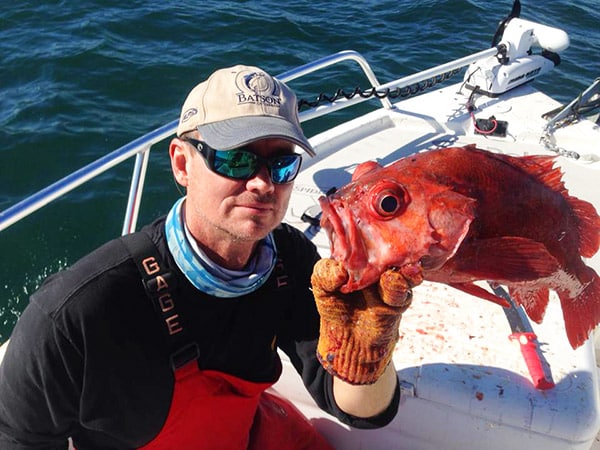 Matt and I spent a couple days targeting rockfish over the weekend and while we didn’t set the world on fire, we did a lot of exploring and still managed to get a few nice fish. Friday morning we launched out of Long Beach and picked up some live squid from the receiver on the way out. Our plan was to fish the Santa Monica Bay on Saturday, so we picked up enough squid so that we would have plenty of fresh dead for day two.

Conditions looked good in the morning, but the fish just weren’t biting. So after hitting several of our go to spots for only a handful of fish, we decided to spend a few hours scouting around. The scouting mission didn’t produce any fish but was still fruitful as we found a few good fishy looking areas to check again in the future. As a side note, you can learn more about how to find rockfish spots in this article. With our scouting done, we gave our morning zone another look. As often happens, the spots that didn’t bite in the morning bit in the afternoon and we ended up with a dozen good sized rockfish. At the end of the day, we went to a spot that had only bit for us once in the past, but had produced big fish on live squid. Much like the last few times we’d been there, the spot marked well but the fish didn’t bite. I ended up using our Minn Kota i-pilot trolling motor’s spot lock function to keep us on top of the spot and after a while we got a few bites.

Our big fish off that spot ended up being a sheephead over twenty pounds, but I dumped another good one that felt like a big ling.

Matt got rocked by another sheephead that absolutely dusted him on the bass gear. On day two, we ran to some numbers on the Short Banks out of Marina Del Rey where a friend had gotten some good reds earlier in the week on live squid. We didn’t have any live squid, but did have some damned good fresh dead, so I thought we’d be okay. That ended up not being the case as the fish we metered wouldn’t even look at the fresh dead squid. Luckily the fish were biting the Ahi Assault diamond jigs and we scratched out a decent bag of rockfish and a couple lingcod. The rest of the day was spent exploring the banks as this was our first time fishing them on our boat.

The reason I’m writing about these two fairly lackluster trips is because they cover two of the typical scenarios you’ll encounter when rockfishing. The first being a day where the fish don’t bite as expected in an area you’re relatively familiar with. While the second is a day where you’re fishing a new area and you’re unprepared for what the fish are biting.

Each of these scenarios offered different fishing hurdles to overcome, but had we followed the following five steps before and during our trip, we’d have likely performed better. Bring the right bait or the tools to catch it

When we headed up to the bay on Saturday, I already knew that we probably needed live squid to catch the big reds that had been biting. But being the lazy fisherman I am, I convinced myself that we could get by with fresh dead and I was wrong. Another mistake I made was not bringing any bait making equipment on the boat. There’s been a bunch of squid up in the bay lately and had I brought an Ahi Squid Catcher, I’d have been able to catch plenty of it during the day. Another good thing to bring when rockfishing is small sabiki rigs for mackerel and bigger ones for catching sand dabs for bait.

Matt and I have been fishing rockfish on bass gear the last couple of years and love it. The problem is that when we hit a big fish spot there’s a chance we’re going to lose fish, like the monster that broke Matt off on Friday. So, it pays to always have a couple heavier rods on the boat as well. Also bring along a variety of sized weights, including some big ones in case you decide to fish deeper or there is more current than expected. I’ll also bring some swimbaits with heavy heads and the Ahi Assault diamond jigs I mentioned earlier. Have a game plan

If it’s just you and a couple friends on the boat, catching limits of rockfish shouldn’t take all day. So, plan to spend part of your day prospecting for new spots, trying different techniques or targeting big fish. Prospecting is definitely the best use of your time as you’ll be adding another arrow to your quiver with every spot you mark. If you’re prospecting in deeper water, just drop an Assault jig on any spot you mark to see if there are biting fish on it. It’s quicker than dropping bait and everything from sand dabs to rockfish and lingcod will bite the jig, so it will give you a quick one drop snap shot of what’s biting on that spot. Execute and adjust your game plan

If the fish aren’t biting in the morning, go burn some time prospecting and then come back and try again. If the fish bite really well first thing, save a couple spots in your limit in case you catch some giant fish later in the day. If the fish won’t bite the bait you brought, catch some different bait and see if it works any better. If they still won’t bite, wind em up and head for a different area all together. Anybody can make a game plan that sounds good at the dock, but it takes confidence and a willingness to step outside your comfort zone to scrap that game plan and play it by ear on the water.

Regardless of whether you killed them or got skunked, there is always something to be learned from a day on the water.

Ask yourself any question you can think of regarding where, why, how and what the fish were doing and compare your answers to what you saw on previous trips to see if you can find a pattern. Some of the questions you could ask are as follows.

Some of these questions are simple to answer, while others might take some guess work on your part. But by answering the ones you know and making educated guesses on the others, you’ll write a story about how the trip played out. If you’re happy with parts of the story, save those chapters for your next trip and rewrite the parts you don’t like. By repeating this process you will continue adding chapters and the resulting story will improve with every trip.