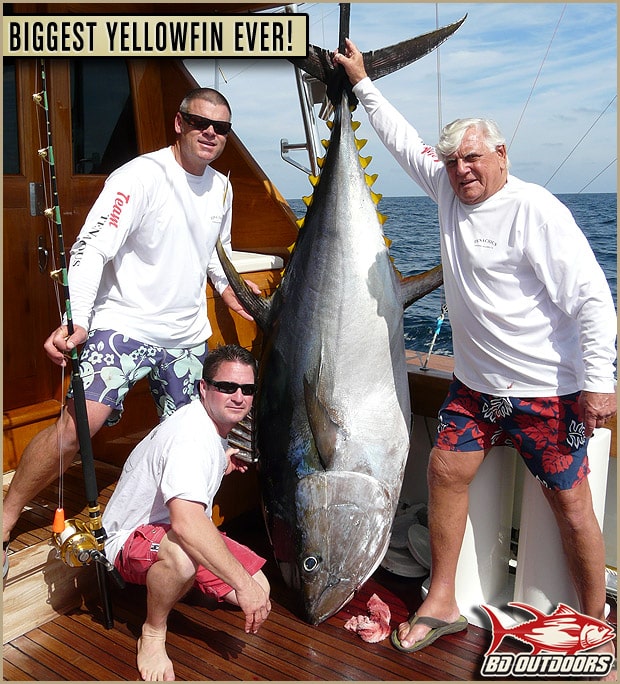 It’s not the new world-record yellowfin tuna. Although it was caught on a Mustad circle hook, it’s not going to win $1 million bucks in the Mustad Hook a Million sweepstakes either. But it may very well be the largest yellowfin tuna ever caught on rod and reel. And for angler Ronnie Tegland, that’s plenty.

Ronnie was fishing with his dad, Ron Tegland, friend C.G. Miller and mates Tony Green and Martin “Lobo” Ruiz on the family boat, Tenacious, a 65-foot Monterey that was previously owned by golfer Greg Norman. The Tegland family keeps Tenacious in San Jose, Mexico, and had decided to make a 170-mile run to fish in the legal waters off the Tres Marias islands.

“We just went out to tuna fish,” Ronnie said. “We went out there with John Miller on the Scrambler and the Journeyman was out there fishing, too. Johnny really put us on the fish. We were going to fish the south end, but Johnny was down there getting bait and he told us to stay up on the north end. He said that’s where they were getting the big fish.”

It was Sunday, January 22, 2012 when the Teglands and their crew started fishing. “On the first day we were slow-trolling live caballitos and caught a 315-pound yellowfin,” Ronnie said. “We trolled some on the second day too, but the big fish hit a bait on the kite, 150 yards off the boat.”

There’s an old saying that you always get bit when you’re either in the head, taking a nap or eating lunch. For Ronnie, it was the latter. After catching the 315 on the first day, his first yellowfin over 300 pounds, the boys put out the sea anchor and spent the night at sea. The next day the fishing picked up. They caught a 70-pounder followed by a nice 260-pounder. There was plenty of meat onboard and Ronnie decided to head into the galley and whip up some ceviche. That’s when the big fish decided to pile on the kite bait.

The float was pulled under and as the mate reeled in the slack line, he came tight to the fish.

“As soon as the line came tight the mate came in the salon and said ‘Dude, you’re bit!’ So, I grabbed the rod from the mate,” Ronnie said.

No one knew that the fish on the other end of the line could potentially be the largest yellowfin tuna ever caught on rod and reel and break the 405-pound world-record yellowfin caught just last year. No one really even thought about it, they were just having a great tuna trip.

The fish put up a tough fight, according to Ronnie, a 39-year-old, 6-foot, 2-inch former professional baseball player from Oxnard, California. It took a bait fished off of a Penn 50 VSW reel rigged with 130-pound Spectra and a top-shot of 100-pound Izorline. When Ronnie got to the reel, there was only 50 or so yards of Spectra left on the spool. Ronnie’s dad fired up the boat and began to give chase just as the knot started to show.

“We chased the fish down as I wound up the belly in the line,” Ronnie said. “I gained half the line back, and we got on top of the fish and let it pull against the boat a little bit.”

The fish somehow got tail-wrapped, and started doing its death circles about 70 feet straight under the boat.

“The fish pulled mean,” Ronnie said. “I kept 28 pounds of drag on it the entire time and it never backed off till it actually died.”

It was a fun chase and Ronnie managed to drink two beers during the fight, which took less than an hour. When the crew got the fish to the side of the boat, they knew it was big, but never thought it would top the 400-pound mark. The crew measured the cow tuna, and came up with 90 inches long with a girth of 62 inches.

There’s a formula marlin fishermen use to estimate a fish’s weight: Length x (Girth squared) / divided by 800. I’m not sure which formula Ronnie and his crew used to estimate the weight of the tuna, but he said that when they plugged in the numbers on the boat, they came up with 389 pounds. A monster yellowfin indeed, but well short of the world record.

“The plan was to eat the fish, so we bled it, cooled it off and jammed it in the ice box,” Ronnie said. “We’re not real hardcore tuna fishermen. We know big fish, but we mainly fish for marlin. Even when I looked at the fish I thought it was a big 300.”

Ronnie said he called some of his buddies in the Carolinas and sent photos to another friend, Tim Robertson out in Kona, Hawaii, who said that tuna are much more dense than marlin so the formula doesn’t work as well. Tim said to drop the 800 down to 750. They tried several different estimates, with one putting the fish at 455 pounds, but everyone sort of settled at 430 so that’s what they stuck with. But by now it was too late, and Ronnie

never intended to apply for a record anyway since the mate handed him the rod. The point was moot.

“Whatever it was, it was a big son of a bitch,” Ronnie said with a laugh. “No regrets.”

The Tegland family has been fishing both recreationally and commercially out of California for three generations. Ron caught some big swordfish back in the day, but he’s never seen a tuna this big.

Ronnie caught the big yellowfin on a Mustad hook, a 3X Demon Perfect Circle Hook to be exact. The crew later realized that had the fish weighed 430-plus pounds and had it claimed the new all-tackle world record, they could’ve won a check from Mustad for a cool $1 million! That one stings, Ronnie admits, but he’s not losing any sleep over it.

The crew ate the belly meat of the fish on the ride back to San Jose, and it was some of the best tuna he’s ever tasted.

Don’t miss your chance to win $1 million bucks in Mustad’s Hook A Million contest. Register now at this link: www.mustadhookamillion.com/mustad/hookamillion.

Read and see more pictures about this incredible catch in our forum.