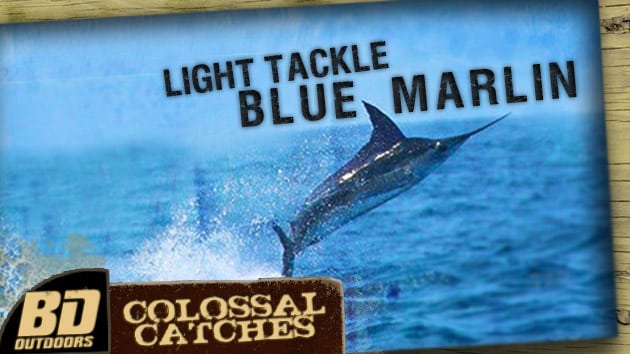 Capt. Jim Sharpe of the charter boat Sea Boots has been a pillar of the Florida Keys fishing community for decades. He just recently took a regular client and friend, Jim Dewitt from Michigan, offshore to livebait for sailfish.

Capt. Sharpe told us, “Jim Dewitt has fished with me many times and a marlin has always been on his bucket list. It just had never worked out that we had been able to dedicate a trip for marlin before.

We were slow trolling live pilchards and mullet for sailfish when a fish boiled on the four inch pilchard pinned on the rigger . We fish 20-pound Penn spinning outfits on the riggers with the bail open and the line tethered by a light copper wire. The line peeled off on the bite so we flipped the bail over and reeled down tight. We then saw the tell tale bill shake, but thought we had the sailfish we were expecting.

After a short run, the fish realized something was up and started greyhounding away from us. It was then that I realized we were hooked up to a blue marlin and it looked like a nice one.

The only thing that kept us from being spooled was a sudden change of direction as the fish jumped back towards us. From this we gained back precious line and the fight continued. We chased the fish for 12 miles, mostly in reverse, from American Shoal to Key West. Jim is an experienced angler and that made a big difference. We had a tiger by the tail, and it was hanging by a thread.

30-pound fluorocarbon leader and a 1/0 hook somehow held this marlin that I believe to be about 300 pounds. We were just out of leader range for about 30 minutes, but finally, my mate was able to leader the fish and make it an official catch. It was a great experience.”

Capt. Sharpe was fishing in about 240 feet outside the reef where one would normally fish for sailfish, dolphin and wahoo. But that is the mystery of offshore fishing; you never know what is next.

Capt. Jim Sharpe has produced a series of informative videos that share his vast experience of fishing the Keys and more. Get more info here or see it first hand aboard the Sea Boots in the Florida Keys.