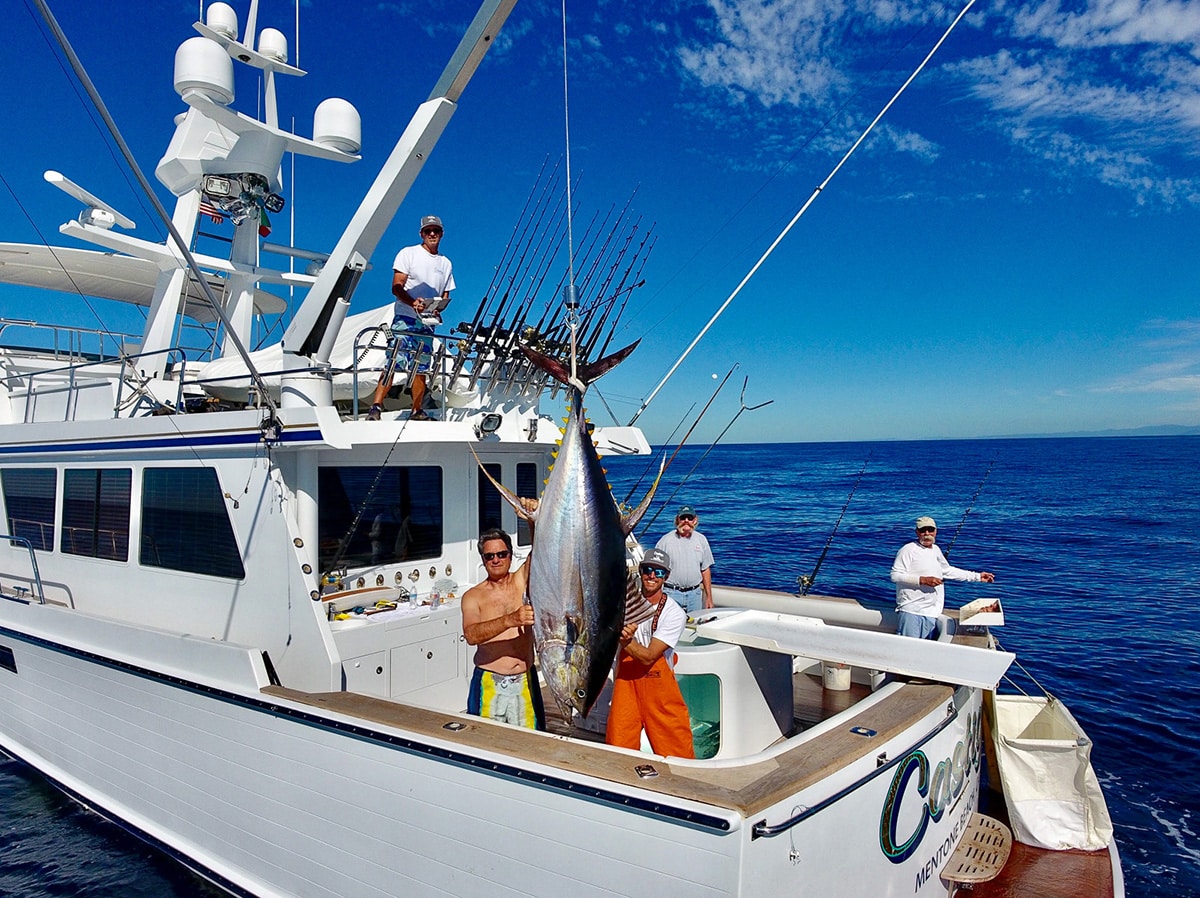 When I first got a glimpse at the picture of this fish on my social media feed, I almost swiped by it… Not because it wasn’t impressive (because it most definitely is!) but because I quickly assumed that this was a bluefin caught somewhere else, not Cabo… But in less than a second, my mind caught it. That’s… here?!

And a yellowfin! The fish looked like it was close to 400-pounds.

I had doubted the species and location momentarily because Adam Cargill had posted it, a fisherman friend that spends his time between Baja and California, fishing professionally. Adam, a Southern California Native is no stranger to big fish, but he wasn’t expecting this.

Because, as it turns out, not only did they have one super-cow tuna hooked up, but THREE, in the span of 24 hours.  Not all landed, but still amazing fishing.

The massive yellowfin, which weighed in at 365-pounds was caught aboard the “El Castigo”, a long range sportfisher owned by Larry Jacinto. Adam says Larry decided to do a last-minute trip and head out with 3 friends and crew, which included Adam as 1st Mate and Captain Sean Sadler, who is originally from Huntington Beach but has lived in Cabo now for 23 years.

The crew received word from their friends aboard the Red Rooster about some big fish out at Golden Gate about 30 miles north of Cabo, in the Pacific. Sadler made the call to head to Golden Gate and try their luck.

Upon arriving they chunk fished and within 30 minutes of chunking they had a “really big one; giant, maybe 380-pounds”, Adam said.

They fought this monster for about 4.5 hours. The fish died when it was after dark and they began hand-lining it up. However, about 15 feet from the boat, the line broke and it sank into the depths.

“We were devastated after we lost this fish, but we were ready to get right back on the spot first thing in the morning.” Adam said, “The next day I rigged the line with a fresh flying fish I had, and immediately, had an explosion on it. Again, huge fish, but we missed it.”

The night before, after losing the big one, Adam had made bait; some nice sardines found at the bank. That was his next tactic. He rigged it up on a 100# Spectra and Yo-Zuri Pink Fluorocarbon and a 5/0 Owner Super Mutu hook. He handed the rod to Steve Hammerschmidt, a friend of Larry’s from Huntington Beach.

Within seconds, he was hooked up.

After a two-and-a-half-hour battle, they had their third huge fish at the boat, but this time they managed to get it onboard.

The group was ecstatic and weighed the fish, which hit 365-pounds on the scale.

This is the biggest yellowfin caught ever for all on board, a tough one to beat and one they will never forget.

Their overnight fishing trip culminated with them going 5 for 6 on striped marlin, 5 for 6 on dorado and 1 for 3 on yellowfin tuna.
The yellowfin tuna bite has remained strong this season in Cabo, one of our best seasons to date, with fish ranging from 100 to 300-pounds almost weekly since September for the Pisces Fleet alone. Just this week we saw Pisces boats land six yellowfin over 100-pounds. We also had reports of others landing yellowfin close to 300-pounds this week out of La Playita in San Jose as well. And of course, not to be forgotten, there was the 345-pound yellowfin caught in this year’s WON Los Cabos Tuna Jackpot by Team Sirena, the 3rd largest fish in tournament history.

*Special thanks to Sean Sadler for all the pictures featured and to Adam Cargill for the full details. Compiled and written by Rebecca Ehrenberg