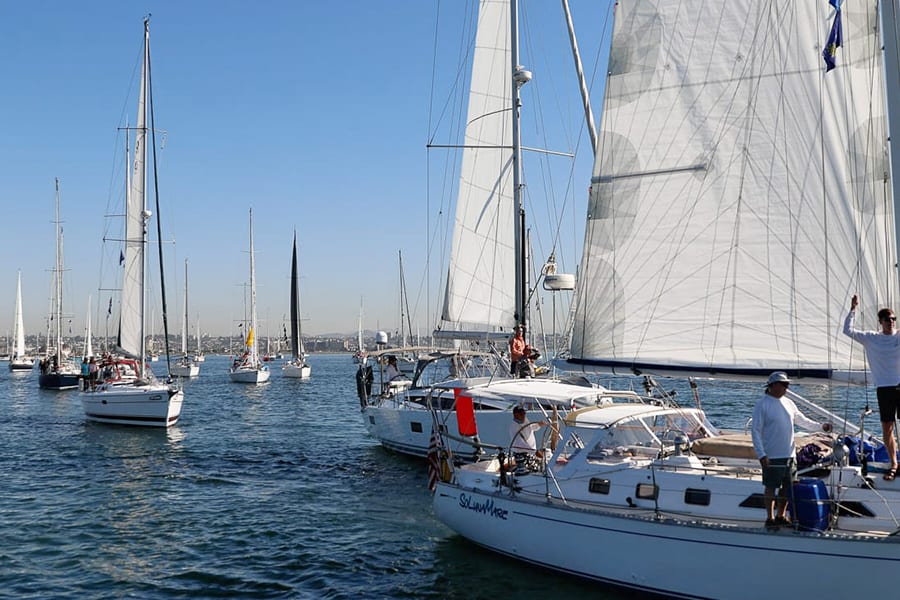 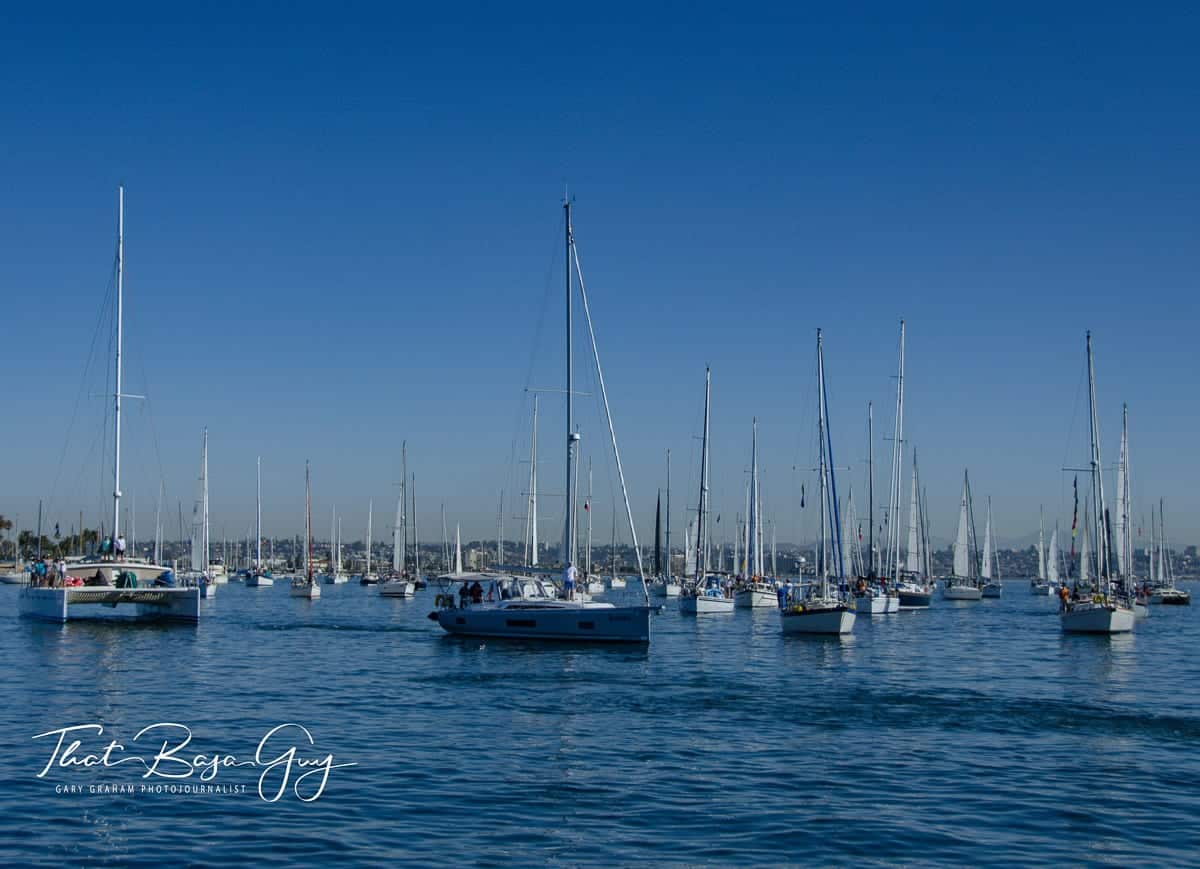 The departure of the Baja Ha-Ha, West Coast’s largest and oldest sailing regatta, was scheduled for November 4 with weather that couldn’t have been more accommodating if it had been scripted. As the sun began its ascent, a cloudless blue Southern California sky revealed itself to the eager adventurers waiting in San Diego Bay for the shotgun start that would allow them to get underway for the 26th time.

Their spirits high, laughter and conversations, yelled from one boat across 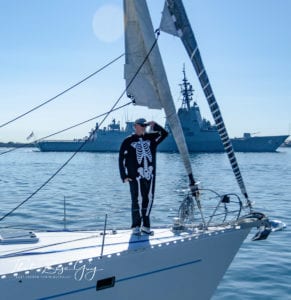 the bay to friends on another, could be heard by many in the still day as the 153 yachts tacked around the harbor waiting to make the 800-mile voyage to Cabo San Lucas. Sailors from California, Oregon, and Washington, along with some from as far away as Sweden and Australia, joined in, dazzling the 65 guests and friends that had been invited by Sportfishing Association of California (SAC) aboard the San Diego-based sportfishing vessel, Dolphin.

Kevin Foley, Vice-Chair of Foundation for the Children. along with staff members and volunteers, checked the attendees in, issuing ID badges before they strolled down to the Harbor Police dock where they were greeted by Ken Franke and wife Karen. Captain Jason Coz and his crew awaited aboard the Dolphin for their guests. 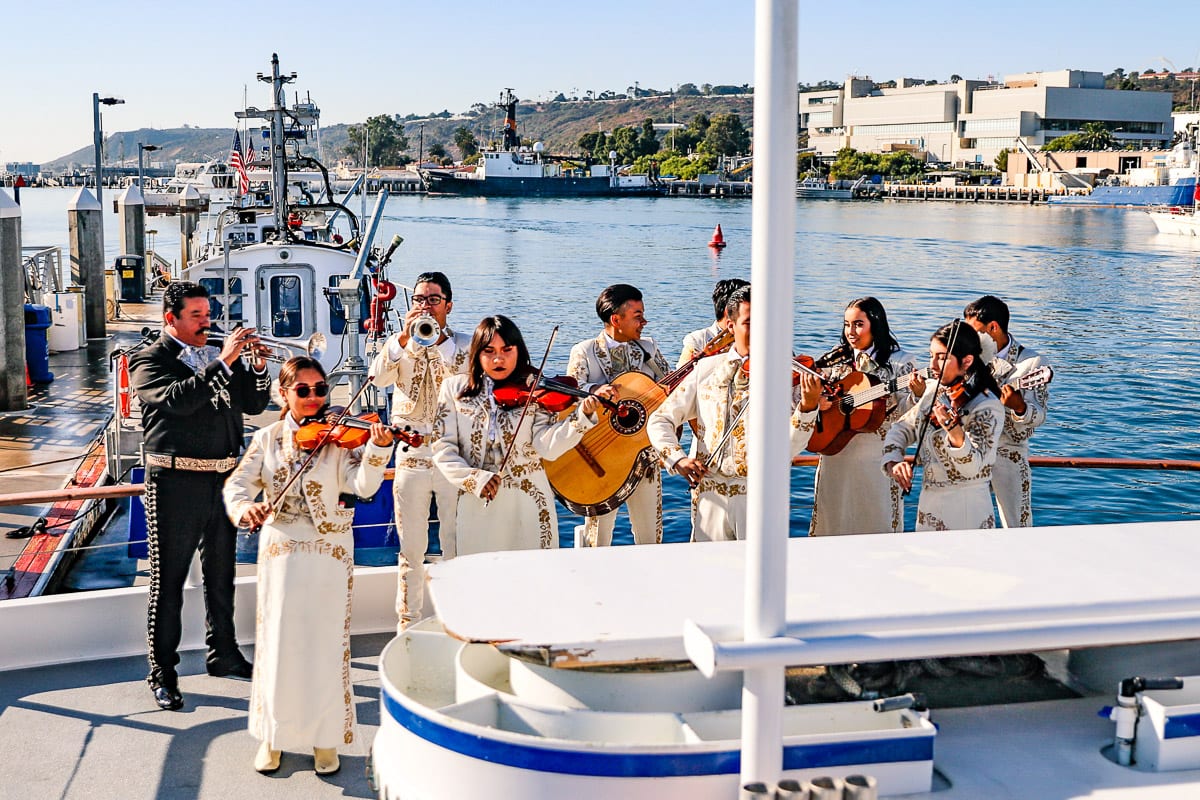 First on the boat, Guadalupe Gonzalez, Mariachi Director, and the Mariachi Juvenil Azteca Mariachi Band from the Sweetwater High School District took their places on the stern where they greeted the arriving guests with upbeat Mexican tunes. The music echoed across the bay as the 153 sailboats of various sizes jockeyed for position in preparation for the 10 a.m. start.

Slowly, the Dolphin was maneuvered into position in the channel outside the Shelter Island Fishing Pier. Franke welcomed the group naming the various dignitaries.

Franke also expressed his appreciation to the Mariachi Azteca Juvenile, adding that he has watched them grow up over the past several years. “So please keep coming back every year,” he admonished.

Then he introduced Consul General Carlos Gonzalez Gutiérrez and his wife, Elina Flores Soto. The Counsel General would have the honor of firing the America’s Cup Shotgun – the gun that would signal the start of the day’s parade.

He continued to explain that the shotgun is the same gun that was used when Dennis Conner represented the San Diego Yacht Club, successfully defending the Cup during the 1988 America’s Cup race where New Zealand’s Michael Fay’s challenge was met by Dennis Conner, and his crew of nine in their 60-foot catamaran, Stars & Stripes. Conner won and America’s Cup stayed at San Diego Yacht Club. For a bit of the sailing history: https://sailusa11.com/americas-cup-history/ 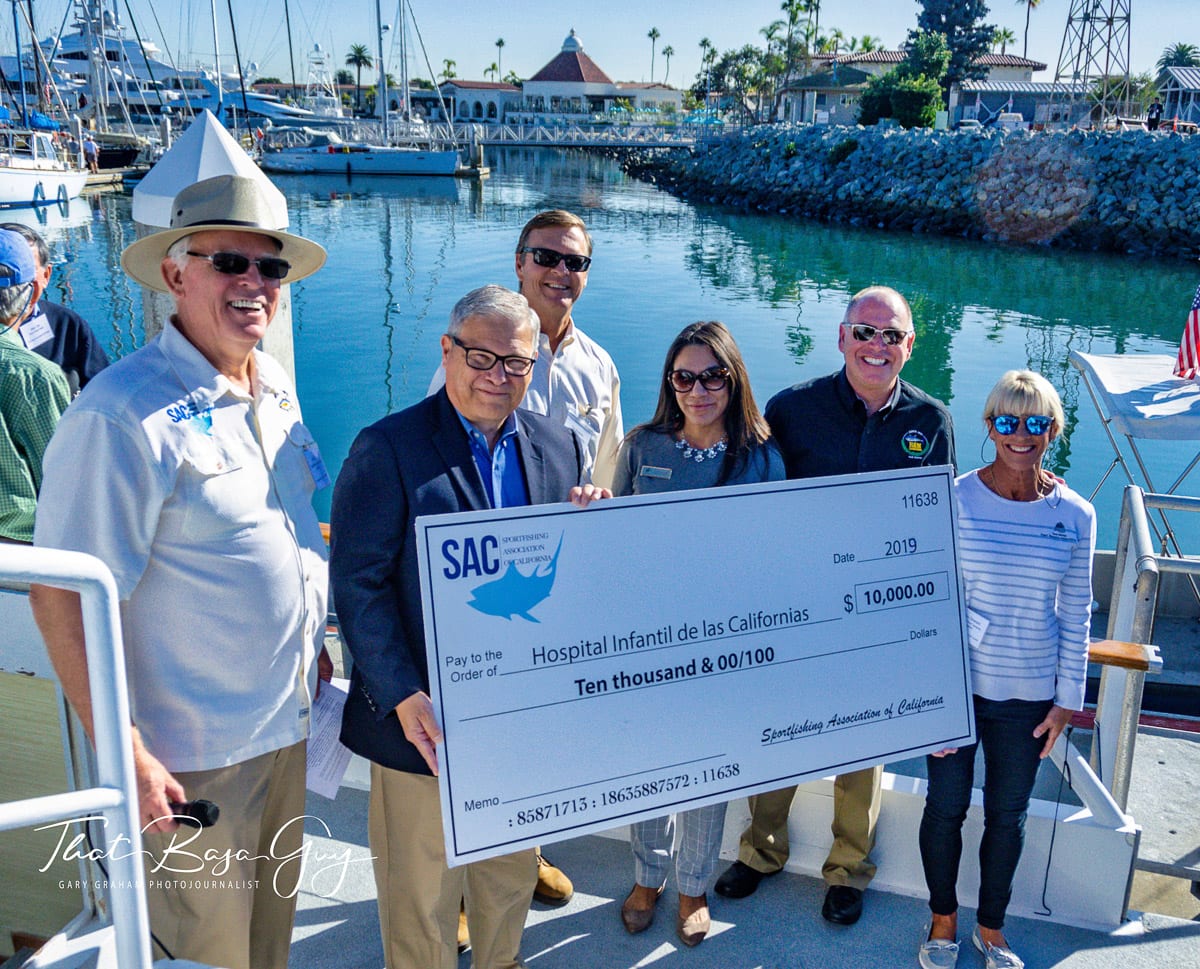 He invited Foley and Cloward to join him in assisting with the presentation. “The Foundation for the Children has been an organization that the port has supported in the past,” Franke began. “Down at the border, they do amazing work dealing with thousands of children each year. For many years we’ve been supporting the children’s hospital and the work they do.”

A $10,000 check was presented by SAC Members, Captains Frank Ursitti and Tim Ekstrom to Kevin Foley and Dionicia Lozoya.

They expressed the organization’s appreciation as well as their personal appreciation for the Port and SAC’s ongoing support over the years.

While the young mariachi group entertained the crowd, the minutes ticked down to the scheduled 10 a.m. start. 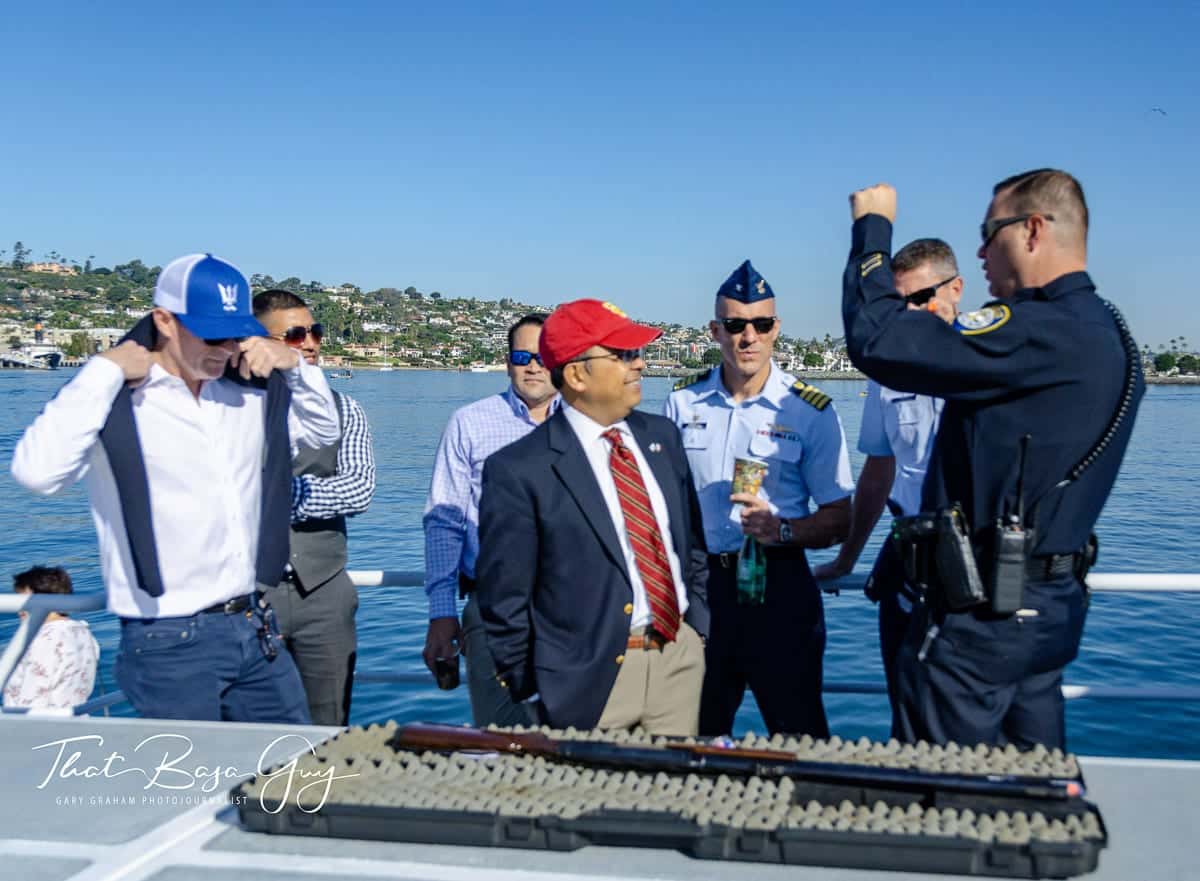 The six designated shooters were briefed on the upper deck on what was expected of them as well as the proper handling of firearms. 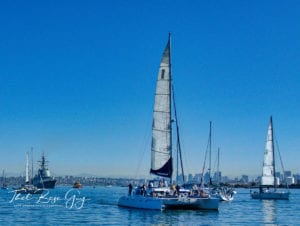 The horizon continued to fill with more and more sailboats eager to get underway after weeks of planning and provisioning, and they were joined by “looky-loos” aboard spectator boats, ranging from inflatables to huge cruisers. 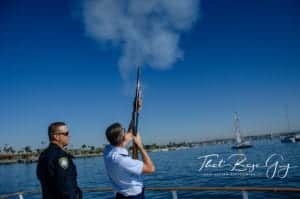 The first warning shot was fired at 9:45 by Commander Chad Robuck, Sector, San Diego, reflecting years of training with firearms, and it pierced the catchy Mariachi music and conversations aboard the Dolphin.

Conversations and music resumed, only to be shattered by the 10-Minute Warning, executed by Michael LaFleur, VP of Marine Operations. As the 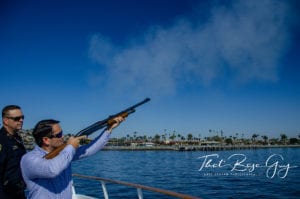 sailboat fleet tightened up their formation, the “fall in” at the stern of the official start boat remained in place in front of the growing fleet.

Then the 5-Minute Warning shot was skillfully fired by 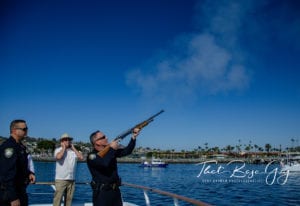 Chief Mark Stainbrook, Harbor PD, revealing his years of training with weapons. Cell phones magically appeared as spectators frantically attempted to record the event for themselves. 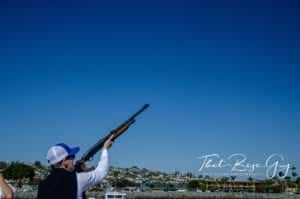 quickened as the 3-Minute Warning shot by Michael Brown, V.P. of Marine Operations, Port of San Diego, reverberated over the wary group that now instinctively covered their ears. 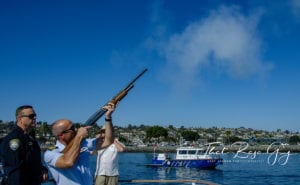 The 1-Minute Warning by Captain Tim Barelli, USCG Sector Command, heightened the excitement as everyone either pressed against the rails or re-positioned themselves on the upper deck for a better view of the extraordinary Baja Ha-Ha fleet. Pennants and flags on the boats fluttered above the crews and the many sailors dressed in costumes ranging from frivolous to outrageous!

The actual starting shot, executed purposely by Consul General Carlos Gonzalez Gutiérrez precisely at 10 a.m., boomed over the fleet – cheers, horns, whistles, and anything else that made noise filled the air as the 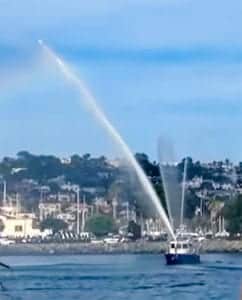 departing boats swept past the start boat which was also filling the morning with laughing and cheering passengers; all the while the mariachis’ music boomed out loudly.

A Harbor Police Fireboat sprayed plumes of water high into the sky, leaving behind colorful rainbows as they arced through the air, dropping gracefully into the harbor. The fleet of boats headed out the channel to the Pacific Ocean, pointing their bows southward.

Their first scheduled stop was Turtle Bay, a dusty fishing village approximately 350 miles down the west coast of Baja that has been a favored fuel stop for powerboats for decades. It is located below Guerrero Negro at the end of a 75-mile dirt road extending from a turnoff on Mex 1.

The itinerary included the annual epic, world-famous, Baja Ha-Ha Cruisers vs. the Mexican baseball team at Turtle Bay competition was held and was followed later that evening by restaurant hopping, (such as it is), in Turtle Bay. The following day, locals hosted the famous Turtle Bay Beach Picnic Party with hot dogs, beer, and other food sold for charity.
A couple of small markets (tiendas), a few small restaurants, an internet cafe, and diesel fuel are available in Turtle Bay.

Then on to the next stop at Bahia Santa Maria, approximately 260 miles farther down the coast of Baja, BCS, truly out in the middle of nowhere.
T 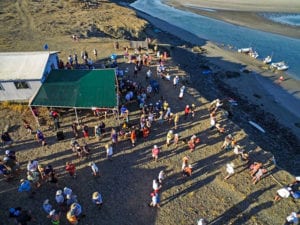 here they hiked, played or relaxed on the beach for a few days, and held the annual Rock ‘n’ Roll Beach Party that was sponsored by the locals. 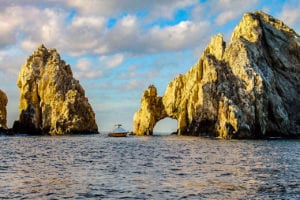 After several R & R days, the Ha-Ha regatta heads 180 miles south to Cabo San Lucas where the Can’t Believe We Cheated Death Again Dance and Party madness is held for the young at heart at Squid Roe until the last body falls.
The awards presentations, hosted by Marina Cabo San Lucas adjacent to the launch ramp in Cabo, is also planned that includes free soft drinks and beer.

And then it’s off to La Paz. The La Paz Beach Party waits for the celebrants at the La Costa Restaurant offering Mexican folk dancing, live music, food and drinks, door prizes – all free for the first 50 Baja Ha-Ha XXVI participants, though everyone is always welcome.

SAC President Franke, recognizing the importance of developing ongoing relationships and dialogue between Mexico and the U.S., along with the Sportfishing Association of California (SAC) with Board approval, over the past 11 years has expanded SAC’s efforts to encourage ongoing joint communication and cooperation between the local government officials and sportfishing leaders in selected cities in Baja, BCS, and Mainland Mexico.

SAC was founded in 1972 by industry leaders speaking out on behalf of their interests. SAC works with several agencies and stakeholders, including the California Department of Fish and Wildlife, United States Coast Guard, Navy, National Marine Fisheries Service, Federal Communications Commission, Congress, California Legislature, and the Mexican Government. SAC employees serve on multiple advisory panels in the state and federal arena and represent industry interests on a variety of topics.

An annual event, the Baja Ha-Ha, emphasizes the partnership between the United States and Mexico, bringing them together in fun, friendship, and a spirit of cooperation.

It highlights the beauty of the two countries in its long and storied sailing tradition.

The goals of the Ha-Ha are simple: for everyone to get to Cabo safely while enjoying some great sights and sailing at the same time making countless new friends on both sides of the border. The event is timed so that even the slowest boats will get about a day and a half of rest at each stop. 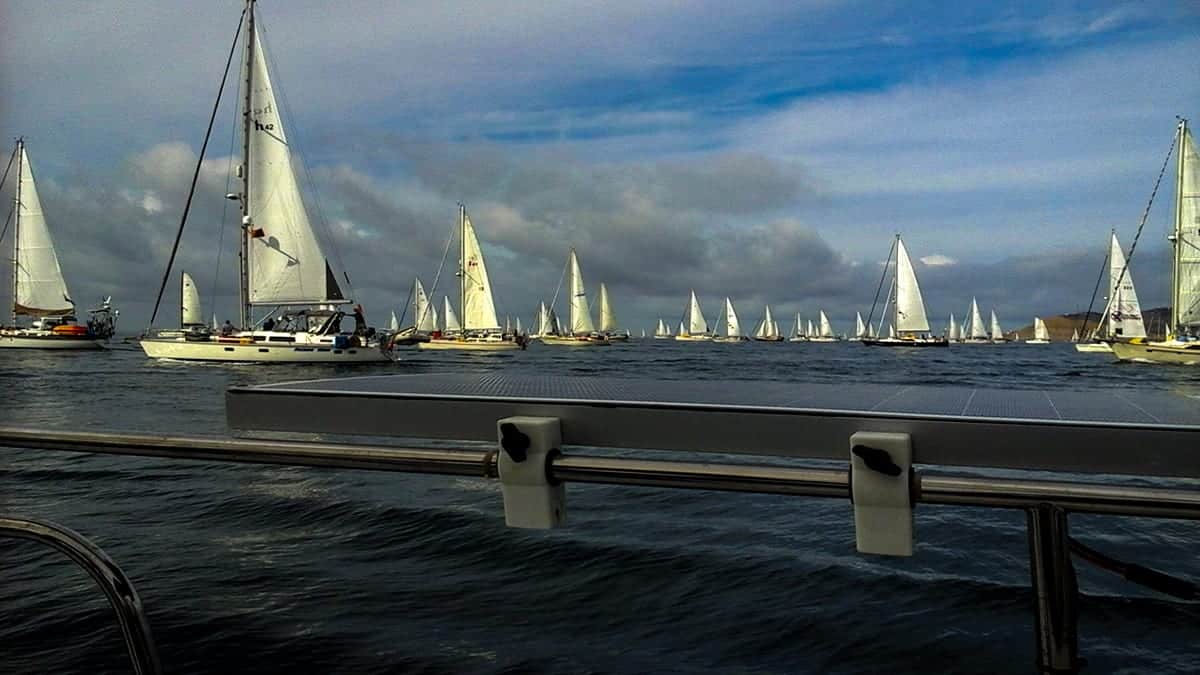 If you are looking for an adventure, Baja Ha-Ha is your answer; you will make memories and friends that will last a lifetime. From the moment you leave the San Diego Harbor, until the moment you tie up in Cabo San Lucas, you will gain as much knowledge and fun as you can handle – plus you will have the opportunity of making at least 500 cruising friends.
Baja Ha-Ha is organized and sponsored by Latitude 38 Magazine. Other sponsors are the Port of San Diego and the Consulate General of Mexico in San Diego.