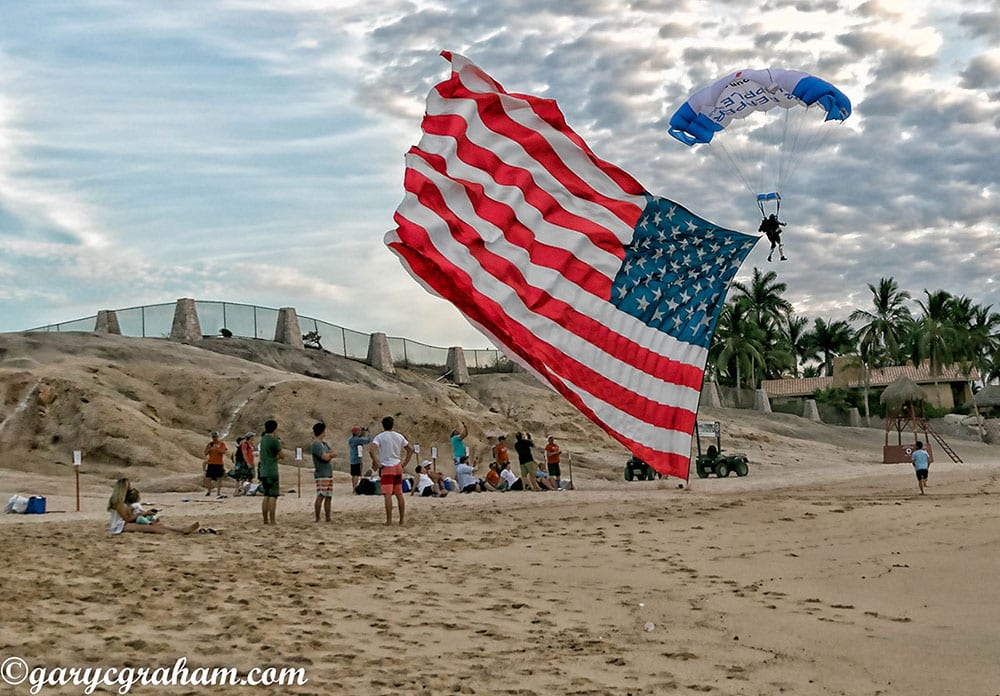 A few years ago, when I first met Richard “Dicko” Gebhard, he impressed me with his drive and untamed energy.  And when I volunteered to help at the Stars & Stripes Tournament, I was astonished at how tirelessly he worked … long after those half his age, had dropped.

Then I learned a bit of background.  In the 1990s, while serving as a board member of Big Brothers Big Sisters of Orange County, Gebhard dreamed up the concept of a small fishing tournament to be held in Cabo San Lucas – a not-for-profit 501(C) 3 organization – as an appealing, new way to encourage support for the Big Brothers Big Sisters of OC. His fellow board members approved and they embarked on a journey that continues today. According to Dicko, the tournament was named the Stars & Stripes by Mitch Parr, son of the William Matt “Bud” Parr, owner of the Hotel Cabo San Lucas, which opened in 1961, with STARS representing the KIDS and STRIPES represented the MARLIN.

Little did they know it would become one of the largest charity events of its kind.

The first event, in 1997, was a sportfishing tournament hosting 100 participants.  Raising money, the Stars & Stripes Tournament was a hit from the beginning.  Dicko and his buddies applied their “Git-R-Done” approach and over the years, they added innovations … discarding some and improving on the successful from year-to-year.

When attendance leveled off, a golf tournament was added to the sportfishing tournament and attendance soared again. At another flat spot, a different year brought on a division they called “Spa” for those who didn’t particularly care for fishing or golf, but wanted to join in the fun. Then someone mused, “What if we added a concert?”  No one objected!

So, one of Baja’s best kept secrets continued to grow over the past 20 years, and so have the dollars which have benefitted more and more children’s charities, as well as many additional children’s organizations and/or individuals on both sides of the border. The Board of Directors, dubbed the “Knights,” who administer the non-profit organization, are:

Guests arrived on chartered Alaska Airlines flights from Orange County and were then whisked to the luxurious beachfront Hilton Los Cabos Beach & Golf Resort, sprawled along the shore of the “Sea of Cortez.” The Stars & Stripes staff welcomed the return of longtime guests and newcomers alike with margaritas while the harmonic and rhythmic sounds of mariachi music played in the background. Greetings could be heard reverberating through the huge open-air lobby lined with registration tables as the reception continued throughout the afternoon and the Baja sun dropped slowly below the horizon into the sparkling azure sea. The next two days were filled with a whirlwind of activities, beginning with golf at the Los Cabos Club Campestre and Chileno Bay courses or sportfishing aboard some of Los Cabos finest charter boats and private yachts. Spa, the final designated activity, was basically a wild card that encompassed almost any other activity, which might be of interest.

In the afternoon after everyone returned from their chosen activity, they could check out the ongoing silent auction conveniently set up in the pool area which allowed time for cooling down in the pool or naps in the Baja sun. Friday night included a cocktail reception on the beach during the Silent Auction. Followed by dinner, a live auction with Shawn Parr, plus a concert with a “Tainted Love” performance, re-living the 1980s.

The seven charismatic and accomplished musicians lived up to the promise for the dancers and spectators crowding the sandy dance floor in front of the stage before the spectacular fireworks display concluded the evening. Saturday activities included dinner, more silent and live auctions with Parr followed by special awards for both golf and sportfishing before recognition of Deb and Dicko by the Knights for their ongoing dedication to the event over the past years; then, it was time to party, celebrating the 20 years with a Grand Finale! With the Rembrandts, Tommy Tuton, Wally Palmer of “The Romantics,” Mark McGrath of “Sugar Ray,” Skip Martin of “Kool & The Gang,” and John Cafferty of “Tunes” – all entertaining from the huge concert stage on the beach. What began with the efforts of a few has grown and now has many, many successful people supporting it, becoming the largest event of its kind in the world! The winning combination of sportfishing, golf, spa and rock concerts has been an extraordinary success.

The tournament has raised extraordinary sums of money benefiting kids of both Baja and California, as well as other organizations: Whether you are an angler, golfer or just want to be a part of such an incredibly successful “feel-good event,” Stars & Stripes demonstrates what good ideas good people can create, and when they do, how those ideas can grow, change and improve!

Come see for yourself in 2017 at the 21st Annual Stars and Stripes Tournament. Dana Bowman parachuted in to signal the shotgun start each day as well as the start of parties each night. Largest wahoo, tuna, and most marlin released awarded to team “Big Boys” aboard the “Quitena” owned by Paul Fruchbom. Special award for the only swordfish ever caught during the 20 years! Team “Home Aid” with Keri Doyle and Tom Doyle along with Scott Redsun aboard “Ruthless” Fifty rod and reels were given out to children of the Stars and Stripes family.