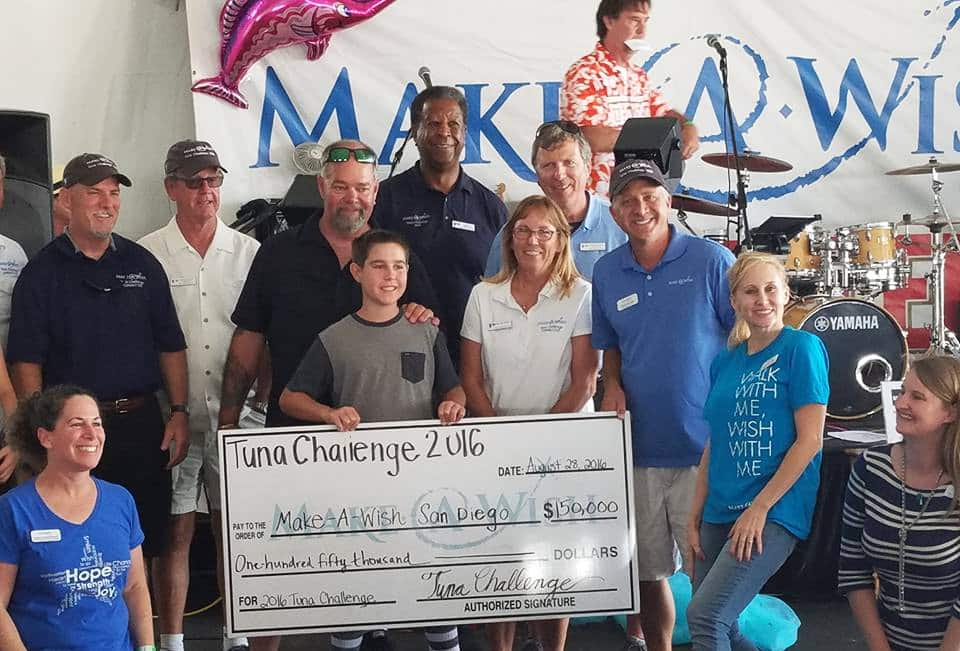 The extraordinary tuna fishing of 2016 continued for the Make A Wish Tuna Challenge setting multiple catch records in its 27 year history.  85 Private Boats and 1 Charter Boat with 375 total anglers including 29 lady anglers and 20 junior anglers summoned up their inner George Farnsworth looking for giant cow tuna while fishing the kite and yummie flyers.  A total of 69 yellowfin tuna to 79-pounds and 33 bluefin tuna to 259-pounds and a handful of dorado and yellowtail were weighed in.  A majority of the teams fished off of the “43”, Pyramid Head and China Point (San Clemente Island). A combination of fly lined sardines, tuna chunks and the yummie flyer fished from the kite was the main ticket. The top overall team was the crew (Tony Dileva, Scott Bradley, Harry Coleman, Randy Murad, Bob Seitz and Bill Seitz) from the “Esperanza” who headed to the ridge between the “43” and Pyramid Head and decked a truly giant bluefin to put them over the edge.  Team captain and angler Tony Dileva (former Tuna Challenge committee member) brought in the 259-pound bluefin tuna, while fishing the kite on a yummie flyer during a sundowner.  The catch earned Tony the Richard Thomas Memorial Grand Prize and a trip to the Grand Alaska Lodge.  Team “Esperanza” did just enough with the rest of their catch to take home the Larger Boat Division and high boat overall with 377.8 points as well as the coveted team champion jackets.  The 2nd place team on the “Reel Eze” with 353.6 points took home the 3rd, 4th and 5th place angler awards (Greg Bohnet, Dan Brown and Connor Burke respectively) with their outstanding team catch of limits of bluefin tuna from 76-91-pounds.  The former team champions really had the bluefin going on the yummie flyer in tight to Pyramid and left them biting in search of larger units after releasing several others.  Team captain Dan Brown and his crew took it upon themselves to raise money on their own for the cause and turned over $4,400 in donations at the banquet to Make A Wish while raising the gauntlet to other boat captains. The 3rd place team with 325.5 points on the “Concubine” led by veteran skipper Skete Simmons took home the 1st and 2nd place spots in the Larger Boat Division while also fishing the kite.  Angler Tom Olson weighed in a 146.60-pound shortfin for 1st place in the Division and won himself a trip for (2) courtesy of the Van Wormer resorts.  Richard Kraseb took 2nd with a 99.2-pound bluefin.

The Smaller Boat Division was taken by the team of “E Fish N Sea” (Billy Treviranus, Rick Gaskins and Eric McCully) who went back to back 2 years in a row with their 4 large yellowfin earning 297.4 points and 4th and 5th place angler awards for Rick and Billy as well as the championship jackets for the team.  Team “E Fish N Sea” got their fish at the “43” on a combination of live and chunked sardines.

The father son combo of Matthew Genovese and Nicholas Genovese hit it big while fishing on their boat the “Reel Medicine.”  Deciding to target dorado to the South, son Nicholas took home the 11 y/o and under Juniors Division with a 15.8-pound dorado.  The dorado was also the largest of the tourney for any angler earning Nicholas a new Shimano Torium in addition to his 1st place prize of a rod and reel combination.  The “Reel Medicine” was in the dorado sidepot and won $500, which was promptly and graciously turned back over as a donation the Make A Wish!  Not to be outdone by his son, father Matthew put out a mackeral on 80# just west of the “230” spot at 6:30 AM and they were rewarded with a very large and wayward bluefin tuna of 203.8-pound, which held the new tournament record for one evening.  The cow bluefin earned Matthew First Place in the Smaller Boat Division and a trip for (2) courtesy of the Van Wormer resorts.

Duane Johnson fishing on the “Madrugador” finished 2nd with a more than respectful 150.8-pound bluefin and Luc Olfield from long time tournament sponsor Angler’s Choice finished 3rd in the Smaller Boat Division with a 88.0-pound bluefin. With generosity being the theme as usual, after taking home the largest yellowtail with a 15.9-pound catch, Kollin Rohr and the rest of Team “Lewis Change” donated their $500 side pot winnings back to Make A Wish as well.

In the 12-15 y/o Junior’s division, the sun shined brightly from above as the top catch was made by 12 y/o Ryan Herrera aboard the “Finology” with a 75.8-pound bluefin after a grueling 1.5-hour battle on 50#  Ryan has fished the tournament in the past with his father Dean who unfortunately passed away earlier this year, but one has to think that his dad was there in spirit helping him with such an outstanding catch.  The 2nd place junior award was taken by Gabrid McMullin on the “Seacall” with a beautiful 61.6-pound yellowfin and 3rd place was earned by Nathan Plum with a respectable 40.4-pound yellowfin.  All of the winning juniors with smiles from ear to ear received new rod and reel combinations to further their fishing interests.

The High Lady Angler award was taken by Lindsay Koroloy on the “Reel Freedom” with a well deserved 72.0-pound yellowfin and she was awarded a $500 gift card to Nordstroms courtesy of Izorline International.  Lindsay spent 2 hours on the fish on 30# line and ended up bringing it in tail wrapped. Lastly, the Top Club Award was brought home by host Silver Gate Yacht Club with their 570.0 points for their top 3 boats.

The biggest winner of the tournament as usual was the Make A Wish Foundation of San Diego. The Make A Wish Tuna Challenge committee, host Silver Gate Yacht Club, volunteers, sponsors and generous anglers are pleased to announce that a total of $150,000+ was raised towards granting wishes to children with life threatening illnesses.

Special accolades go out to 3 time chairman Mike Smith. Without his leadership, the Tuna Challenge simply would not have happened. Congratulations to all for their hard work and dedication!