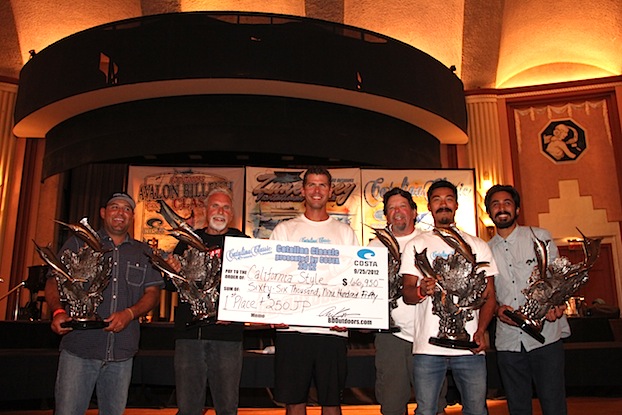 The 2012 California Billfish Series presented by COSTA gave away about $150,000 in cash and prizes in its three tournaments, including the Zane Grey Invitational, the Avalon Billfish Classic and the Catalina Classic. While the striped marlin fishing was tough, nearly every crew saw fish and had a chance at the big prizes up for grabs. But at the end of the day, the teams on Chaser, a 54-foot Viking with Capt. Jimmy Kingsmill at the helm and California Style, a 50-foot Pacifica led by Burl Gregory and G.J. Sacco were the big winners.

Chaser won the opening event of the California Billfish Series, the Zane Grey Invitational, with three striped marlin releases. Chaser leapfrogged over Chiqelin, who released the first striped marlin of the series on Day One of the Zane Grey with Capt. Mike “Beak” Hurt at the wheel and angler Rich Raffieny manning the fishing rod. The fishing really picked up on Day Two of the Zane Grey. Just a few minutes after the Chaser released its first striped marlin of Day Two, the crew on the Gambler, a 73-foot Nordlund, hit a hot spot and managed to hook a double-header on bait. Unfortunately, one of the fish came unbuttoned, but angler Billy Miyagawa, Sr. who is no stranger to fishing the California Billfish Series, managed to get his striped marlin to the boat and record a release for his team at 9:04 a.m.

Chaser added another release on the day to finish with three striped marlin releases, enough to take home first place honors and nearly $32,000 in cash. The teams on Chiqelin and Gambler both released one striped marlin each, but Chiqelin won second place honors base on time and took home a check worth $26,392. Gambler finished in third place and won $1,920.

The bite looked promising for the next tournaments on the agenda, the Avalon Billfish Classic and the Catalina Classic, which were fished simultaneously on historic Catalina Island, taking place September 23-25th.

The ABC and the Catalina Classic began with an opening day party at Descanso Beach. As teams registered they were greeted by sponsors, handed captain’s bags full of swag and invited to take part in the annual casting contest and fighting chair contest. The weather was perfect and everyone planned their fishing strategy.

Most boats headed toward San Clemente Island after the Shotgun Start on Day One, and that’s where California Style would find the winning fish.

California Style called in the first hookup of the event at 9:30 a.m. on Day One. Christian Petersen hooked the striped marlin on a lure and got the fish to the boat just 30 minutes later when they were faced with the tough decision of boating the striped marlin or releasing it. To count as a qualifying striped marlin, the fish must measure at least 80 inches or weigh 145 pounds. The crew’s captain, Burl Gregory, and mate G.J. Sacco made sure the fish would qualify before deciding to boat it, which they did. With the fish secure, California Style kept on fishing, hoping they’d hook another one.

The clock was well past 7 p.m. when California Style finally made it back to the Green Pier in historic Avalon Harbor to hoist their fish up onto the scale. A crowd gathered to see if the striped marlin would qualify. Tournament Director Ali Hussainy got out the official tournament measuring tape and laid it down on the fish. A hush fell over the crowd until he read out the measurements: 81 ½ inches! Just big enough to qualify. The fish weighed in at 142.5 pounds.

The crew from California Style, including Gregory, Sacco, Jonathan David, Adrian Adrineda, Michael Caldwell and Petersen were back on the radio on Day Two, calling in more hookups. The action for the team started just after 10:45 a.m. when G.J. Sacco hooked a fish on a live bait. He battled the leaping striped marlin for nearly an hour when the fish came unbuttoned and swam off. It was a tough break for the leading team, but they didn’t give up and they found another fish at noon. This striped marlin was hooked on a live bait, also by Sacco, and he wasn’t about to lose it. In just 15 minutes, he got the fish to the boat and made the call to release it.

With one release and one qualifying marlin, California Style swept up in the Catalina Classic to take home $66,950 in cash. They also won brand-new COSTA sunglasses and a set of custom-made trophies featuring three leaping marlin on solid black bases.

California Style’s performance netted them the $25,000 rollover money from the 2011 Catalina Classic as well as the basic entry category and the $250 optional dailies for both Day One and Day Two.

Burl Gregory took the mike and told the crowd how long he’s fished these events and always wanted to win. “But I’m glad I decided to wait until this year,” he joked.

After the winning teams were brought on stage and given their trophies and checks, tournament director Ali Hussainy began raffling off the mountain of prizes for the crews. Anglers scored a bounty of rods, reels, custom art, apparel, sunglasses, line, leader and more, but everyone had their eye on the STEDI-EYE Mariner gyroscopic binoculars from the good folks at Fraser Optics. The gyros are the mega-raffle item for all of the anglers who fish in the Avalon Billfish Classic. Clayton Dobbs, the captain of Reel Nice & Easy just about lost his prize. Andrew Finn from Fraser Optics got up to the stage and he and Ali called out the winning numbers but no one claimed the gyros. So they grabbed another ticket and that’s when Clayton sprung out of his seat and made his way to the stage. Just like the fishing, it was a climatic end to another great year for the California Billfish Series.

For more information on the California Billfish Series, visit www.CatalinaClassic.com.