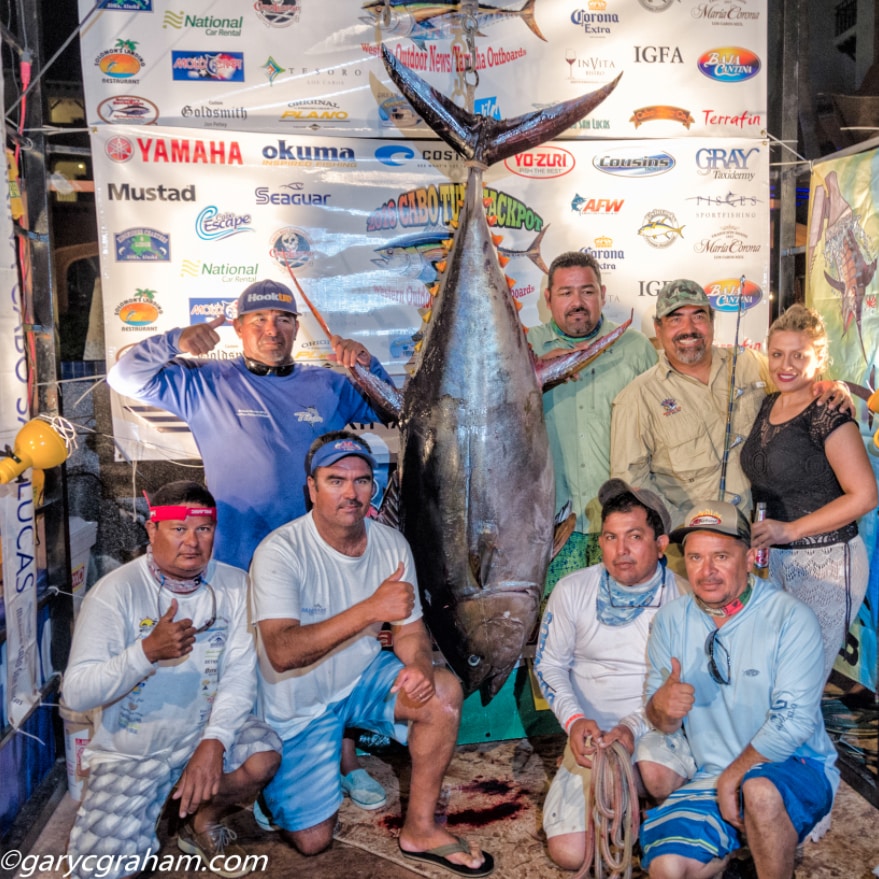 The 18th Annual WON Yamaha Los Cabos Tuna Jackpot, the largest Tuna tournament in the world concluded with an awards ceremony filled with emotion and jubilation.

Held on the huge Cruise ship pier located in the IGY Marina. Over 750 anglers, friends, family and dignitaries gathered to celebrate what Pat McDonell, Tournament Director described, “as an exceptional experience and the last two days of weigh-ins have been epic.” As the event that broke its own records for attendance, 168 teams, up 25 from last year and the highest payout ever. $747,500

First place  and the Championship went to Team America,  David Macklis, Angelica Cota and Juan Collins all from Los Barriles led by Chucky Van Wormer, son of Baja pioneer and founder of Van Wormer Resorts in Los Barriles, BCS, Bob Van Wormer fishing aboard the Tu Corazon. Who landed an enormous 298-pound yellowfin tuna, the second largest in the events history. Earning the team $179,975 for; 1st place overall, Day 1 $500, $1,000 and $2,000.

Accepting the award, Van Wormer explained that the team name “Team America” was chosen to honor the life of an 11-year-old niece of the Captain who lost her battle to cancer at 5:20-am on November 3rd, just a little before they began the first day of fishing. We were so sad for the loss of America’s life, but we felt she went straight to heaven and was watching over us.

Van Wormer, filled with emotion, speaking to the 2nd place team “Reel Quest” winners of second place and largest payout in the events history, “you may have the best equipment and good luck, however this time we had a little angel looking over us.”

Dick Landfield commented “In all my years of fishing, I have never, never had the team that we have now. I couldn’t be happier as an owner with our team!”

The total amount raised for this year’s charity “Smiles International” totaled $40,000 that will be matched by the pharmaceutical industry.